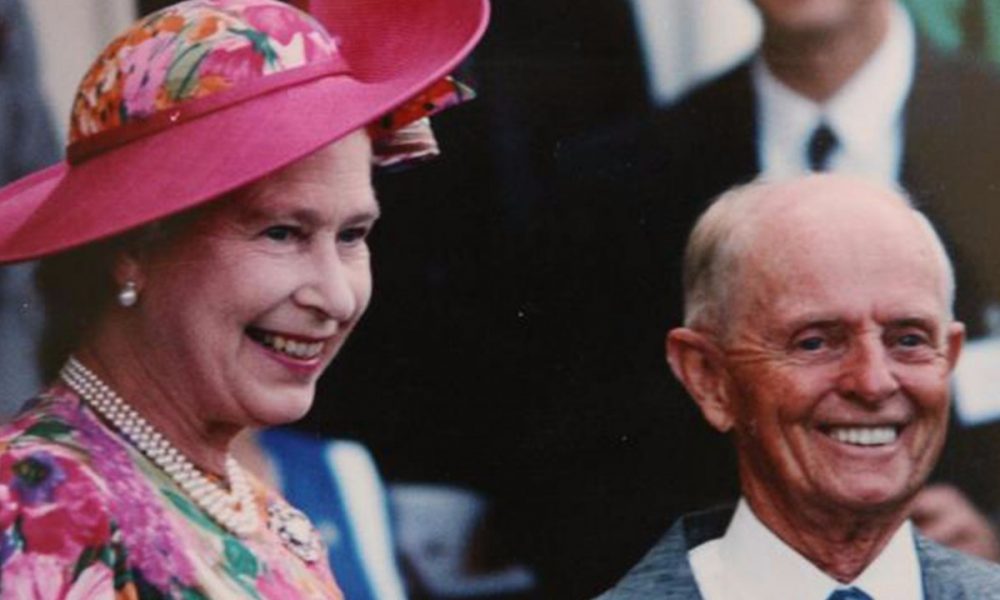 Through a distinguished career, he rode about1200 winners internationally and was aboard major race winners in England, Ireland, America, India and Australia.

He rode, for 18 months, for the King of England and 1948 – with 145 winners – he was second to the King of Jockeys Sir Gordon Richards in the British jockeys’ premiership. He won India’s first Derby held in 1943.

He was tiny at 150 centimetres and weighing about 40 kilograms.

Britt retired in 1959 but kept his hand in racing, notably as a columnist and was awarded the Medal of the Order of Australia and inducted into the Australian Racing Hall of Fame in 2004.

In 2013, his 100th birthday was marked by a lunch at Royal Randwick attended by champion jockeys and dignitaries of the Australian turf.

“In 1948, Britt rode 145 winners and was runner-up to the legendary Sir Gordon Richards in the British jockeys’ premiership. In his 18 months as king’s jockey, Britt had frequent meetings with the then Princess Elizabeth and Princess Margaret, as he saddled up. On one occasion Princess Margaret told him that though it was not her inclination, he could “give it one”, being the whip, if he felt the horse could do better.

“Britt came equal third in the English jockeys’ premiership in 1954, having ridden 869 winners in nine seasons in England. In 1955 he rode another 101 winners from 459 mounts and thought he might go on for another seven years. But in 1957, he came only 10th in the British jockeys’ premiership with just over 60 winners, and in 1959, now a father of four, he retired.”

His career began with an apprenticeship to Michael Polson at Randwick. Polson was adamant the kid “could ride a bit”.  He rode his first winner, Gypsy King at Canterbury in January, 1930.

In 1933, he ventured to America and won the Baltimore Handicap on Winooka. That was quite a story as Max Presnell wrote in the SMH in 2010.

“Only 19, Britt, already a gun apprentice in Sydney,” Presnell wrote, “went with his master, trainer Mick Polson, to the US in the wake of Phar Lap. Polson took two horses: Winooka, an outstanding sprinter, and Trevallion, above average, but regarded as little more than a travelling companion.

”More than 5000 people crowded the wharf to wish us good luck and cheered as Monterey left,” Britt wrote in his memoirs, Post Haste. ”The horses were carried as deck cargo and between the two horse boxes was an enclosed area of 20 yards of sand. We walked the horses singly every day to give them exercise for the three weeks they were aboard.”

Winooka was the ballyhoo attraction but, due to heavy tracks, took time to find his form, thus the headline: ”Not Winooka but Palooka gets beaten at Laurel Park.”

With heavy expenses, the contingent began to run short of the necessary capital and with Winooka hardly a betting proposition, Trevallion had to be the pea.

”Betting at the time was on the tote and the party’s bets were placed at tote odds with starting-price bookmakers in New York, so the money would not depress the odds on course,” Britt wrote.

”I knew our finances were low because Mr Polson had borrowed $100 from me but I did not did not realise just how desperate they were until the day of the race. When Mr Polson came to leg me on to Trevallion he was trembling. He never worried about a race even when he wagered thousands of pounds on it. This time, though, he was obviously disturbed. In a low voice he said: ‘If we don’t win we don’t go home.”’

However, the teenager was not only out to get the money but to even a few scores.

”As a matter of fact one or two rivals had previously given me a rough time and more than once had tried to put me over the fence,” Britt recalled. ”The starting bell rang and I had Trevallion out of the gate so quickly that within half a furlong I was in front on the fence having piled all the inside horses in a heap as I went across. I felt pretty safe in regard to the stewards because in previous races when I had been knocked about they had said nothing.

”As we hit the back stretch I felt my saddle shifting. I looked down and saw this jockey had my saddlecloth wrapped around his arm, getting a free lift from my horse. There was only one thing to do; I pulled my whip and gave him a couple of smart cuts across the arm. I heard his cry of pain and stream of abuse but he let the saddlecloth go.”

Trevallion won by eight lengths and paid 15/1. Next day the Aussies were headline news nationwide due to the wail of New York bookmakers. Reports indicated that between $75,000 and $150,000 changed hands.

On his return to Australia, Britt was successful but later moved to India, then a big racing centre, where, according to folklore, he was given his weight in diamonds for major success by an owner.

”No, later in Great Britain I received a Bentley – slightly used but very valuable – from a Maharaja,” Britt told Presnell in 2010.

Back in Australia, he won the 1934 Sydney Cup on Broad Arrow who would later finish fourth, with Britt up, to Peter Pan in that year’s Melbourne Cup.

In 1935, he went to India and rode for the Maharajah of Baroda for ten years. Jockeypedia notes that he then went to England in April 1945 where he was still engaged by the Maharajah. He rode 20 winners from just 107 rides in 1945. That tally increased the following season to 92, which had him fourth  behind Gordon Richards in the jockeys’ premiership table.

In 1947 he won the Irish Derby and the St Leger but in 1948, he was replaced by Charlie Smirke as the Maharajah’s jockey.

He remained in England and when his friend Harry Carr (whom he’d met in India) broke his leg, Britt replaced him on many of Captain Boyd-Rochfort’s runners, winning the Yorkshire Oaks on Angelola for King George Vl and a second St Leger on Black Tarquin. Also, that year, he won his second Cesarewitch.

His career was marked by success from the start. Britt, in his memoirs, wrote: “Polson was a great master…to this day I can hear him calling out to me – I was eighteen and the Australian racing season had just ended – and he had my bank book in his hand: “do you know Edgar you have earned more than the Premier of New South Wales.”