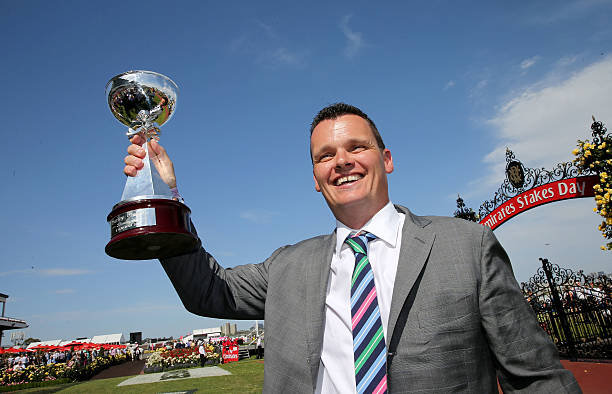 It seems Group 1s can be like the proverbial public bus. You can wait a long time for one, and then they all come together.

Eighteen months after his third attempt at a Group 1 victory, the remarkable late-starter Eduardo (Host) broke through at the top level by claiming The Galaxy (Gr 1, 1100m) at Rosehill in March. After a third-placed finish in Nature’s Strip’s (Nicconi) TJ Smith (Gr 1, 1200m), he’s now taken a second with Saturday’s Doomben 10,000 (Gr 1, 1200m).

Similar can be said of his Chilean-born sire Host (Hussonet). Thirteen years after Swettenham Stud’s Adam Sangster imported the stallion, he now, finally, has those two Group 1s to his name. The sad part is he was not around for it, having died of colic, aged 19, in January last year, when his finest offspring had only a Group 2 win on his resume.

“That’s typical,” the jovial Sangster says ruefully. “Host was a very good bread-and-butter horse, and now he’s produced a champion. It always happens once a sire passes away.”

Sangster bought Host across the Pacific in 2008. Weekend Hussler (Hussonet) fever was at full cry. The Ross McDonald-trained gelding was going about winning 12 of his first 15 starts, including six Group 1 victories in seven successive tries which sealed him the 2007-2008 Australian Horse of the Year title. As he took the breath of Australian racegoers away, interest in his sire Hussonet (Mr Prospector) – and in the previously obscure racing jurisdiction of Chile – intensified.

Arrowfield Stud’s John Messara had purchased the US-bred Hussonet from Chile in 2003. He’d had just two Listed placings in the US but became a seven-time champion sire in his new South American home. It was hoped the son of Mr Prospector (Raise A Native) would provide some outcross temptation for Australian breeders, but thanks to Weekend Hussler, he became a sensation instead. In 2008 his service fee had rocketed to $138,000.

Sangster saw an opportunity for another, less expensive, son of Hussonet to stand in Australia, and picked up Host, who’d been an outstanding racehorse. He was Chile’s champion two-year-old, winning at Group 3 and Listed level, before taking the 2,000 Guineas (Local Gr 1, 1600m) at three by more than six lengths on his way to Horse of The Year honours.

Bought by Canadian interests, he shone in North America. He won the Keeneland Turf Mile (Gr 1, 8f) in 2005 (in which Australian sprint star Alinghi (Encosta De Lago) finished down the field), and at Grade 2 and Grade 3 level in the US – the latter as an eight-year-old – before Sangster bought him.

Host arrived at Swettenham just as the global financial crisis was starting to bite, making some breeders fear they had spiders in their pockets. He did enjoy a little success, relatively early on. Philippi brought back-to-back middle distance success in the Alister Clark (Gr 2, 2040m) and Tulloch Stakes (Gr 2, 2000m) of 2013, then came second in Dundeel’s (Late, It’s A Dundeel) (High Chaparral) AJC Derby (Gr 1, 2400m), before a moderate career in Hong Kong racing as Vanilla. But overall, Host fell a good way short of his father at stud.

“I suppose, looking back,” says Sangster of this particular piece of speculation among hundreds, “you’d say he was a good bread-and-butter stallion, who suited the owner-breeders’ market.”

Sangster moved Host on to stand at South Australia’s Willow Grove stud in 2015, but before then, two such owner-breeders had stepped into the fray.

Nick Cresci and Jane Kaufmann had worked together at a used car dealership. Kaufmann had a background in horses and a property near Cranbourne. Cresci had had shares in gallopers – he’d spelled some at Kaufmann’s place – and had a hobby in breeding them. The pair went to the 2010 Inglis Melbourne March Thoroughbred Sale and paid $4,000 for the mare Blushing (Fantastic Light).

She was an unraced daughter of Fantastic Light (Rahy) out of the Dehere (Deputy Minister) mare Lavina Bay, who won at Rosehill on debut but never again in 15 starts.

There was some class in the female line, but it wasn’t in the reckoning. Cresci is more about heart than head, and Blushing was in foal to an old favourite.

“I’m not so much into the science side, like nicks and things. I’m a little dabbler,” Cresci, 68, tells It’s In The Blood. “It wasn’t anything about the pedigree that got me interested, it was just that Blushing was in foal to Domesday (Red Ransom).

“I really liked him as a horse, so that’s why I was keen,” he said of the son of Red Ransom (Roberto), who from just eight starts had won the 2005 Silver Slipper (Gr 2, 1100m) and came fifth in the Golden version.

“Domesday had been throwing out a few winners as well, so that helped. But I couldn’t even tell you why Blushing was unraced. Probably because she couldn’t run!”

The Domesday colt arrived and, racing as My Angus, claimed for Cresci and Kaufmann an Ararat maiden in a modest 11-start career.

Sticking to a tight budget, Cresci and Kaufmann sent their mare to Keffelstein (Redoute’s Choice). The resultant filly, Watch Me Blush, won on debut at Pakenham in 2016 in very slick time, but grew into a large type with injury problems, and was placed twice more from eight starts.

For their second mating with the mare, in 2012, Cresci and Kaufmann sent Blushing to Swettenham’s Chilean sire.

“It was affordable for me, at a $5,000 service fee, and that was about it,” Cresci says, of the mating that hatched Eduardo. “We got lucky, really. I think it was more the mare than anything. I sent another mare to Host and its foal couldn’t run out of sight.”

It’s well documented now that – because of budgets again – Eduardo wasn’t even broken in until he was four, as his owners, Kaufmann and Cresci, already had a couple in work and couldn’t afford another. Eventually he had his first start when seven weeks off turning five.

In the care of young trainer Sarah Zschoke – an old workmate of Kaufmann’s from Enver Jusovic’s stable who’d also trained Watch Me Blush and My Angus – Eduardo won his first two starts and claimed the Caulfield Sprint (Gr 2, 1000m) at his fifth start. After a third-place finish in the Oakleigh Plate (Gr 1, 1100m), he was eventually transferred to Joe Pride in Sydney last winter after a syndicate purchased 70 per cent of him from Cresci and Kaufmann.

Given what has transpired – so far – does Cresci regret not starting Eduardo sooner?

“No,” he says. “We had one or two running already and it was a budget thing. We couldn’t put them all into work. Unfortunately, that costs money!

“But it might’ve been the making of him, too. He’s a rising seven-year-old and he’s as sound as a bell. And who’s to say he was going to win any races at two or three? You don’t know.”

With prize-money of $2.6 million so far, there are certainly no complaints from the ownership team, as Eduardo continues to prove the class that was there in the pedigree after all.

His third dam Peggy Ann (Bletchingly) was a Group 3 winner in Brisbane, but her dam Avon Angel (Avon Valley) was the pick of the bunch, winning the Rosemount Wines Classic (now the Coolmore Classic) (Gr 1, 1500m) of 1985, and the now-Group 1 Canterbury Stakes (1300m), among six stakes wins. She was also a half-sister to Group 1 winner Card Shark (Ace Of Aces).

Avon Angel also carries the classic English lines of Gallivanter (Golden Cloud) in the sireline and Lepidoptic (Preciptic) in the female line – both lines which have now died out.

Eduardo is also the last offspring of Blushing, who was taken by a snake bite. But Watch Me Blush has what Cresci calls a “lovely” colt by another budget sire in Rock Hero (Fastnet Rock) on the ground, who’ll also go to Pride’s stable, and is in foal to Ilovethiscity (Magic Albert).