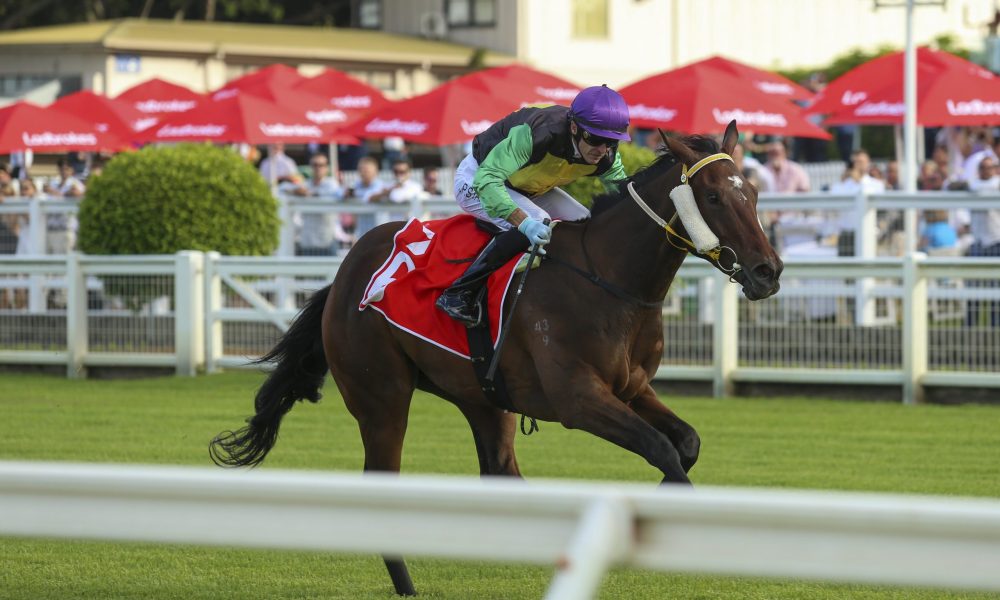 There are accidental heroes and there are heroic tales full of accidents. End Assembly (Outreach) is a bit of both.

The three-year-old gelding won in Listed class at Eagle Farm on Saturday in the Gold Edition Plate (1200m), staying unbeaten after gaping wins in his first two starts in Toowoomba for trainer Mark “Boof” Currie. And in the big money world of thoroughbred racing and breeding, this is as unconventional a journey towards black type as you’re likely to hear.

It starts with his dam, the often fiery Lohnro’s Spirit (Lonhro) who, winless in a dozen tries with Noel Mayfield-Smith, transferred north and won four country races out of the Toowoomba stables of Boof’s son Ben. She raced for an ownership team including Jack Price, his brother and a couple of cousins named Grills, all bushies from around northern New South Wales and/or the Darling Downs.

There wasn’t much to write home about in the immediate pedigree. Lohnro’s Spirit’s dam Rejoice (Belong To Me) won two races for Gai Waterhouse, both at Wyong, and had four foals that weren’t much good.

Price is a 32-year-old who you could describe as a knock-about bloke. Not only is he one of Mark Currie’s clients, he’s on the staff as well, as a stablehand – services he deploys to cover training fees for around nine runners he part-owns.

He was a fall-about bloke on Saturday. So excited by End Assembly winning the $200,000 race – and knocking off the short favourite Golden Boom (Spirit Of Boom) at the a juicy $15 quote that Price didn’t miss – he broke into a celebratory sprint in the mounting yard, tripped and came down, much to the mirth of those who know him.

When Lonhro’s Spirit finished racing in 2016, Price, his brother and cousins decided to dabble in breeding. They chose an unproven Widden Stud stallion in his third season, for not a lot of reason other than he was affordable, at $7,700.

Outreach (Exceed And Excel) had raced only once before going amiss and being retired. It was meritorious – a three-quarter length second in the Group 3 Canonbury Stakes (1100m) to Vancouver (Medaglia D’Oro), who’d win the Todman and Golden Slipper in his next two starts – but he’d prove more dud than stud.

In fact, with End Assembly now winning a stakes race, Outreach continues something of a trend this year. Daumier won the Group 1 Blue Diamond Stakes after his sire Epaulette had been bundled off to Turkey. Giga Kick claimed The Everest, with his dad Scissor Kick now resident in the thoroughbred hotbed of Tunisia.

Outreach hasn’t been shown the door yet but he will be, Widden’s Antony Thompson told ANZ Bloodstock News last Friday. Neither the next day’s success, nor the deeds of his other stakes winner from 159 runners Turk Warrior (two Listed wins in Tassie) will be enough to keep him. Widden in fact tried to move Outreach out before this year’s breeding season, but couldn’t. He served a couple of dozen mares this year at $4,400 a pop, whilst awaiting relocation.

All of this modest history was in the future when Price and co sent Lonhro’s Spirit to the stallion.

“I’m good mates with [trainer] Paul Snowden,” Price tells It’s In The Blood. “And he said Outreach was one of the best sprinters they’d had. He also said he was standing at the right price for us, and that the cross of him with our mare looked OK.”

Once in-foal, Lonhro’s Spirit went to Price’s uncle’s farm. Charlie Grills breeds large numbers of stock horses at Holbrook, between Wagga and Albury. There are fine, manicured farms where expensive thoroughbreds are born and raised and this isn’t one of them.

Lonhro’s Spirit had her colt foal on Melbourne Cup eve, 2017, but picked an odd spot.

“They found him in the morning in a wombat hole,” Price says. “He was a bit stuck.”

They named him Wedged.

“My uncle was away at the time, so a couple of his workers pulled him out,” Price says. “His front legs were always real bent. He could run but he didn’t mould into a very good racehorse.”

Wedged kicked off with Brett Cavanough – part of a Queensland bush mates triumvirate including Mark Currie and Peter Moody – before transferring to Currie, with whom he managed to claim a maiden at Goondiwindi.

Price and co had sent Lonhro’s Spirit back to Outreach a second time, and this resultant colt also got into strife down at Uncle Charlie’s farm.

He was at least born onto flat earth, but had some rambunctious ways early on. He more than once collided with the fencing, then as a yearling one day he became stuck – or wedged if you like – in the part at the end of a section of fencing where everything’s tied off. It’s known as the end assembly. The naming papers were accordingly filled out.

“He was injured pretty bad, actually. But they stitched him up and he was OK,” says Price.

Not long after he was prised out, so were a couple of other things, though that was another accident.

“He was in a paddock with about 40 other young stock horse colts who’d been marked up for gelding,” Price says. “And, ah, they basically forgot he was in amongst them. So he accidentally got put through and gelded with all the other stock horses.

“It was just a mistake. I dunno, you normally geld them anyway.”

Price can afford to laugh about it now. End Assembly, reported by Currie to have a “beautiful” placid nature, so impressed with his victory by an extending length margin on Saturday, the phone was soon running hot. Price says agents from gelding-centric Hong Kong were floating figures of “$1.5 to $1.7 million” for the three-year-old. Not that he and his co-owners are interested.

“We’re happy to keep running him. At the end of the day this is what you do it for – to hopefully get a good one you can have some fun with,” says Price, while conceding an extra half million or so could prompt a rethink.

For now, End Assembly appears likely to be targeted towards the Group 3 Vo Rogue Plate for three-year-olds at Doomben on New Year’s Eve. The $2m Magic Millions Guineas, also 1400 metres, comes two weeks later, but since he didn’t go through that sale, or any other for that matter, he’d need a wild card invitation.

“He pulled up real good after Saturday,” says Currie. “I thought he might be a bit jaded, but you wouldn’t know he’d been round.

“He’s always had the ability, but he’s still mentally and physically immature. It’s funny – he’s by Outreach, who hasn’t done much at stud, but they always seem to get a good one, don’t they?

“And he’s nothing like his older brother. Wedged was a completely different horse – a chunky little round thing and and short-barrelled. End Assembly is a rangy, leggy thing and just a beautiful mover. He’s poetry in motion.”

Pedigree-wise, there are some hints as to why Outreach over Lohnro’s Spirit might have worked.

In the recent past, from limited numbers, Lonhro counts as Outreach’s best nick, with five winners from seven runners, including one stakes winner in End Assembly. And Lonhro ranks third amongst Outreach’s sire Exceed And Excel’s nicks, with 34 winners – five in black-type races – from 46 runners.

Back far earlier, there’s also an intricate mix of two of the all-time influential mares in End Assembly’s pedigree, from the seventh to ninth generations, in Plucky Liege (Spearmint) and La Troienne (Teddy).

Plucky Liege makes nine appearances in each of Outreach and Lonhro’s Spirit’s lineages, in subtly different blends. Importantly, her influence filters through all four of her most impactful sons – Bull Dog, Sir Gallahad, Bois Rousel and Admiral Drake – and through various of their female and male offspring, with Outreach and Lonhro’s Spirit having a different trio of the four.

Bull Dog – seen as different to his three brothers and thus important to have in the mix – appears five times in Outreach’s pedigree, through two mares, Boola Brook and Gaga, and two stallions, Bull Lea and Occupy. And he’s in Lonhro’s Spirit four times, through the same two stallions and the mares Boola Brook and Miss Dogwood.

La Troienne is in Outreach’s side four times, through two mares in Businesslike and Baby League, and in Lonhro’s Spirit’s half thrice, twice through stallion Bimelech and once through the exceptional mare Big Hurry, dam of five stakes-winners.

Such an intricate blend, however accidentally achieved, may well have maximised the chances of End Assembly doing well. Similarly, they may have been compromised by a wombat hole when it came to his older brother, and could have all been brought to nought had End Assembly struck that fence a little harder.

At least the making of the thoroughbred, and the rare path to success, is a never-boring puzzle that keeps us all thinking.