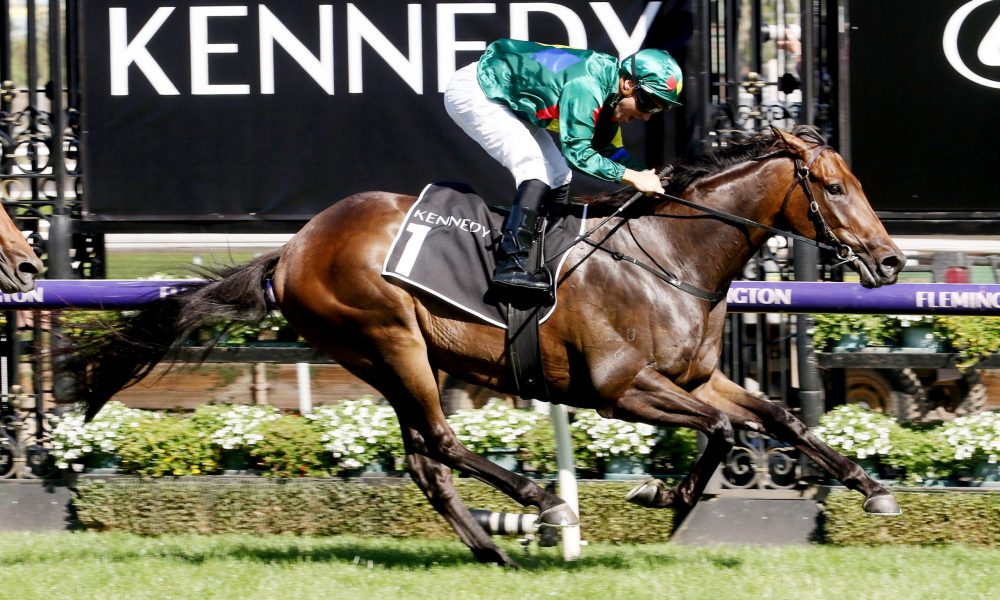 The Alligator Blood (All Too Hard) story has had more twists and turns, plots, and subplots than a Shakespeare play.

On Saturday it took yet another turn when the five-year-old, now under the care of his third trainer, returned to the winner’s circle after a hiatus of almost 16 months with a dominant victory in Queensland’s iconic Stradbroke Handicap (Gr 1, 1400m).

The horse’s name is a poker term for never giving up and, ironically, until the weekend, many had given up on the gelding and his owner Allan Endresz.

A controversial figure who has been engaged in a legal battle with the Australian government for the past 25 years, Endresz is a maligned individual.

People inside and outside the racing industry treat him with caution and in fact, Racing NSW recently banned him from owning and racing horses in the state.

I interviewed him yesterday on my Talking Horses radio segment on RSN Sport 927 which is broadcast live out of Melbourne and we spoke without constraint. Like many of us, he thinks the horse’s comeback is incredible.

“Saturday was an extraordinary day. It was a bitter-sweet moment for me and the family,” said Endresz.

He watched the Stradbroke from the bedside of his terminally ill wife Joy.

“I shared the moment with her on my phone. She was unconscious at the time but I’m pretty sure she knew what was going on and several weeks ago she farewelled the family and made the comment to make sure Al wins.”

That dying wish was granted and, sadly, less than 24 hours after he crossed the line at Eagle Farm, she passed away.

What a weekend of mixed emotions for Endresz and all connected closely to this fascinating horse who has returned from a major operation for the debilitating condition Kissing Spine to climb the Group 1 mountain once again.

“Everyone has issues and dramas in life and you are on life’s roller coaster and that was a special moment. We have given him the best opportunity and two years of the best rehab and work.”

Young Queensland trainer Billy Healey did much of the work that led to the successful outcome on Saturday.

“Billy deserves a lot of credit and that program was sensational. He did a lot of beach work, and around the stables, and it changed the horse’s mindset.

“He’s such a wonderful young fellow Billy and we have still got a dozen horses with him. When we had issues and he was carrying heavy weights and tracks were going against us to his credit he said ‘look guys I don’t think I can do much more and I recommend sending him to Gai (Waterhouse) once more’.

“It was Billy and her team that worked together. He’s a fantastic guy and we love him. He will win some Group 1s and hopefully, they will be with us.”

While Healey is still trying to get that elusive first Group 1 on the board, Alligator Blood brought up a milestone 150th winner at racing’s highest level for champion trainer Gai Waterhouse.

Speaking from the UK where she is currently holidaying, Waterhouse heaped plenty of praise on her co-trainer Adrian Bott and the integral role he has played in the Lazarus-like comeback of Alligator Blood.

Endresz is equally grateful and impressed.

“He’s an extraordinary guy. He’s so professional and informative and you know exactly where you are at with the horse. All honours to Adrian.”

Endresz says he has no hard feelings about the horse’s previous trainer David Vandyke who sacked him and his horse from the stable but he’s pretty matter-of-fact about putting his own perspective on what transpired.

“Sadly, David gave up on the horse. He said he was sour. I didn’t believe that for a minute and we took him to an amazing team at Gatton and the spinal operation proved him otherwise.”

What happened back then is long past history and the least of Endresz’ worries at the moment. He admits he loves a legal stoush and he has just a few of those on his agenda at the moment.

He has been fighting against the disqualification of Alligator Blood from his 2020 Magic Millions 3YO Guineas (RL, 1400m) win and a decision in relation to that appeal is due any day.

“I made a promise to clear up that debacle at the Magic Millions and am now waiting on Justice Burns to hand down his decision and it will be game-changing for the way the industry treats people. Owners fund millions and millions of dollars and they are prized assets. Through no fault of ours, Al got disqualified.”

Endresz is also preparing to put the gloves on for a potential battle with Racing NSW.

“There are two outcomes. I take the easy road or the hard road. The easy road is I lock down my applications to the High Court on the government matter and that’s a $4.3 billion claim and I’m not about to give that up after 25 years of pursuing on behalf of a lot of supporters and investors. I can finally do that through the bankruptcy and I’m not going to give that up for the sake of Racing NSW and they are aware of that.

“Other states have taken a different approach. They see what’s happening and therefore that I’m not a bad boy.”

All the opinions that fly around don’t seem to worry Endresz. He has a hide like a rhino.

“There are knockers out there and everybody has an opinion and the reality is that we soak up that negative position and take that into a positive.”

Saturday’s Stradbroke certainly proved that. I can’t wait for the next instalment of Alligator Blood.