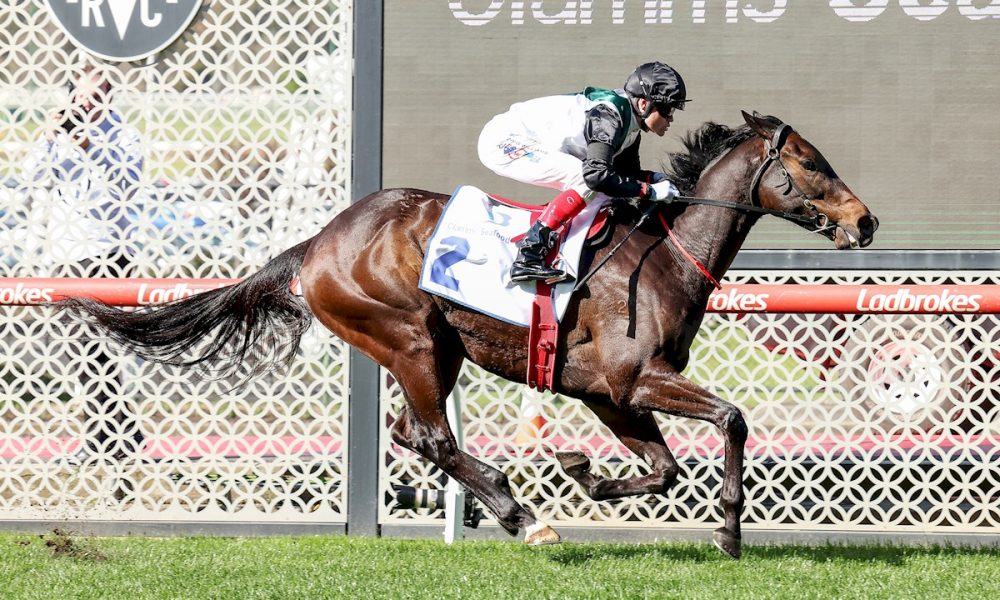 Barely a month into the new season and already the juices are flowing.

Moonee Valley’s weight-for-age classic championship, the Cox Plate (Gr 1, 2040), is just next month, albeit the fourth Saturday of next month. However, the field is developing into another gem.

It’s been a decade since a New Zealand-bred horse won the Cox Plate, when Ocean Park (Thorn Park) in 2012 became the fifth Kiwi-bred in six years to claim the title, but two New Zealand-bred chances are emerging as live contenders to end the drought and take the challenge to last year’s runner-up Anamoe (Street Boss) and Zaaki (Leroidesanimaux), who both returned with comprehensive victories to begin their campaigns in the Winx Stakes (Gr 1, 1400m) and Tramway Stakes (Gr 2, 1400m) respectively.

Although he was matched against just four opponents, Mr Brightside (Bullbars) put his hand up for the Cox Plate with a commanding display in the Feehan Stakes (Gr 2, 1600m) last Saturday. Experience around the tricky Moonee Valley layout can trip up newcomers but the five-year-old’s on-pace racing style was already proved.

His emergence has been rapid. Mr Brightside’s first run at the track took place at the same meeting a year ago, in a Benchmark 78 over the same 1600 metres. He motored around the tight course like a veteran, was always handy, and ran on strongly for his fourth successive win.

Two more victories, for a picket fence of six, would follow, including at Flemington and a Listed win at Ballarat, closing out his spring last year with a fourth in the Cantala Stakes (Gr 1, 1600m) on Derby Day back at Flemington.

Rested until mid-February, he took on the big boys and girls, recording a third and two fourths, two in stakes and a rousing fourth in the rich All-Star Mile (1600m), emerging from the pack too late, but certainly not disgraced and a very good run.

He has not been beaten since.

In a bold move, his connections decided his talents were such that the Doncaster Mile (Gr 1, 1600m) was within his scope. A wide draw didn’t help and he was trapped three-wide, yet handy, until the top of the straight. He handled his first attempt right-handed like a professional and showed his usual determination, rallying from the 150 metres when he could have been excused.

Yes, a handicap, and he carried only 50.5 kilograms, but it was the way he put his head down and gave his all that stands out. He’s a winner.

A fresh-up win on August 13 at Caulfield in the PB Lawrence Stakes (Gr 2, 1400m) was a tough run, yet the same bulldog attitude was apparent as he emerged a neck victor of the race.

Regular rider Craig Williams, who has partnered the gelding in all his Australian starts, was highly complimentary of Saturday’s Feehan win.

“He had the run under his belt leading into this, he’s done nothing but please the stable, he’s come back a weight-for-age horse and he’d previously won at The Valley, so he ticked a lot of boxes for today’s race,” said Williams. “But the sheer performance that he gave me today, and the feeling that he gave me, shows he’s on target for whatever the boys choose to do with him.”

“He’ll put his hand up for the Cox Plate. He was strong through the line there and he hit the line and didn’t stop. He beat a good field very easily and I think the sky’s the limit.”

He, too, has winning form at Moonee Valley. With a tendency to get back then power home, he closed nicely and was fast eating into the winning break of Snapdancer (Choisir).

These four (two Kiwis and two Aussies) could provide the nucleus of the field but from this coming weekend the respective winners of the following five Group 1s will further clarify the field.

Gavelhouse Plus will play out again this coming week with the offering of class racemare Entriviere (Tavistock).

Entriviere will undoubtedly attract much attention just as the breeding season has got underway. She is almost certain to find herself in Australia, unless a consortium of New Zealand breeders decides that she should remain here. Seven figures will likely be needed to complete the purchase but it remains to be seen if that figure begins with a one or a two.

As for her future as a broodmare, her sire Tavistock (Montjeu), who can claim 38 individual stakes winners, just happens to be the damsire of Mr Brightside (Bullbars), a very timely coincidence.

Mr Brightside is one of five Group winners from Tavistock mares. Making up the other four are Dragon Queen (Sweynesse), winner of the Westbury Stud Classic (Gr 2, 1400m) as well as the three Group 3 winners; Annavisto (Reliable Man), Bellaconte (Burgundy) and Sydney performer Straight Arrow (Fastnet Rock). As a broodmare sire, Tavistock is operating at an eyecating 13.5 per cent stakes-winners-to-runners ratio.

Entriviere raced 16 times for seven wins, her jewel in the crown being Ellerslie’s Railway Stakes (Gr 1, 1200) in which she defeated Levante (Proisir), who would score back-to-back Group 1s at her next two starts.

She retired with earnings of $691,962 and represents a nice family. Her winning dam, Marcey’s Belt (Golan), is a half-sister to Light Fingers Stakes (Gr 2, 1200m) winner Adrift (Zabeel) and to Karaka Million (RL, 1200m) winner Xiong Feng (Iffraaj). Her granddam is a half-sister to triple Group 1 victor Maldivian (Zabeel), whose premier performance was when winning the 2008 Cox Plate.

At the opposite end of the scale, this week’s column-hogger, Mr Brightside, was an absolute bargain when purchased for $7,750 out of the August 31, 2020 edition of Gavelhouse’s auctions. At the same sale, Little Avondale Stud offered Rochfort (Cecconi), the dam of Newmarket Handicap (Gr 1, 1200m) winner Roch ‘N’ Horse (Per Incanto). The mare was passed in at $500.

Not seen since March and two placings at two, Sheez Dominant matched her name from the 200 metres for an easy three-length win, notching both her maiden win and maiden stakes success. She was fourth early, moved up to third past the 1000 metres and, holding the rail, still third at the 600 metres. She hugged the fence to lead them in, kicked clear from the 200 metres, her distinctive white blaze clearly on show, and was much too good to the line.

“She is a filly we have held in very high regard from day one,” said winning trainer Fraser Auret. “She had two runs as a two-year-old and then she went back to the property of Mike Bentley, who is one of her owners, to spell over the winter. It is a credit to him that she came back to us in such magnificent condition and she has just thrived since she has been back in work.”

Sheez Dominant holds a nomination for the New Zealand 1,000 Guineas (Gr 1, 1600m), prompting Auret to add: “I think with what we have seen, and her pedigree, then she will be best suited over a mile to 2000 metres.”

While she is the sole black-type performer within her first two generations, her Sydney-winning granddam is a half-sister to Bishop’s Rock (Redoute’s Choice), a dual Grade 2 winner in South Africa.

For her sire, Vanbrugh (Encosta De Lago), whose initial crop are now four-year-olds, Sheez Dominant is a first stakes winner and fully deserved at that.

Retiring as a winner of the Spring Champion Stakes (Gr 1, 2000m), Vanbrugh won at Randwick at two and remained sound at four to add the Coongy Stakes (Gr 3, 2000m).

Setting out on his stud career at Windsor Park Stud in Cambridge in 2017, he had plenty of competition. Windsor Park were not only attempting to get Vanbrugh off the ground, they also had Turn Me Loose (Iffraaj) and Rageese (Street Cry) to promote. Outside of these were Waikato Stud’s Tivaci (High Chaparral), Rich Hill Stud’s Vadamos (Monsun), Haunui Farm’s Belardo (Lope De Vega) and Westbury Stud’s Tarzino (Tavistock).

In a shrinking broodmare market, numbers are critical and Vanbrugh’s first crop totalled just 36 foals. His second crop, which includes the Wanganui Guineas winner, totalled 16 for a grand total of 52. His third crop (just turned two) fell to 11 but recovered a little to 28 for his fourth (yearlings). Pleasingly, his coverings in 2021 jumped again so his numbers are improving yet still small by comparison to others.

Those numbers make it tough to get noticed especially when compared to the first two crops by Tivaci (189), Turn Me Loose (185), Tarzino (173), Vadamos (181) and Belardo (156), the latter two including New Zealand foals only.

The stud season has barely kicked into gear, so Vanbrugh might now get a little more attention from undecided broodmare owners.

On the back of his most successful season so far, Westbury Stud’s El Roca (Fastnet Rock) is picking up where he left off after a consistent last season. He broke into the top ten on the New Zealand sire premiership (earnings) last season, siring 35 individual winners, three of which were black-type winners.

Her trainer, Anna Clement, gave out a clue as to her future by lining her up in the Castletown Stakes (Listed, 1200m) on debut. The filly failed to fire that day, but ran second soon after, and has taken that confidence to a Listed stakes victory.

Shuffled back to a three-wide sixth at the 600 metres, she rounded into the straight four-wide, accelerated to be handier, and had the leaders in her sights soon after straightening. Keeping up a solid run, she took over at the 100 metres and was too good by a half length.

Similar to the Wanganui Guineas winner, Rocababy is the sole black-type performer within her first two generations yet her granddam, Bold Faith (Warning), had some ability as the winner of seven in England and France including two at Newmarket.

Bold Faith is a sister to Warbler, a Listed winner in France, and half-sister to another French Listed winner, Silly Bold (Rousillon).