Exciting European sire Aclaim to shuttle to Aquis Farm in 2022 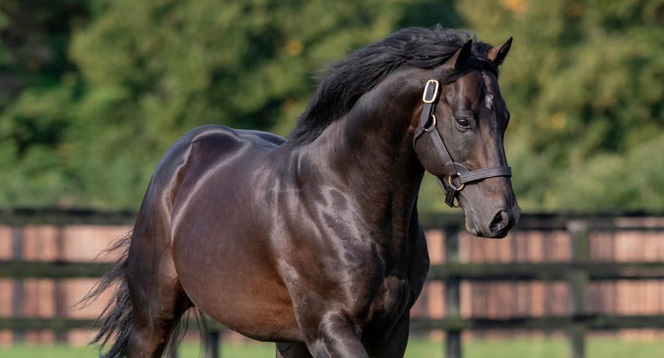 Group 1-winning European sprinter and exciting northern hemisphere sire Aclaim (Acclamation) will shuttle to Aquis Farm in Queensland this year, three years after he was initially slated to do so.

ANZ Bloodstock News can reveal that Aclaim, the sire of 1,000 Guineas (Gr 1, 1m) winner Cachet and the unbeaten stakes-winning sprinter Royal Aclaim in the UK this year, will stand alongside the likes of Pierata (Pierro) and Brave Smash (Tosen Phantom) on the 18-horse roster at Aquis’ Canungra-based operation in 2022.

Aclaim was due to shuttle to Aquis Farm in 2019, but his southern hemisphere trip was aborted before the start of the breeding season and was likewise halted in 2020 or 2021, however his progeny’s success in the northern hemisphere has prompted a reevaluation of his worth Down Under.

He will stand for a fee of $24,200 (inc GST) in his maiden southern hemisphere stint.

“He has got a lot of promising horses coming through. Royal Aclaim looks to be one right out of the box and she is the current favourite for the Group 1 sprint at York, the Nunthorpe Stakes, a race Ortensia won [in 2012],” Davies said yesterday.

“To also get a Group 1 Classic winner in his first crop with Cachet is exceptional, so it makes him a very exciting proposition for Australian breeders.”

Victorious at his only start as a juvenile, Aclaim won the Dubai Duty Free Cup (Listed, 7f) at Kempton and the Challenge Stakes (Gr 2, 7f) at Newmarket at three before racing on as a four-year-old for trainer Martyn Meade, a move which paid the ultimate dividend.

Bred and raced by a partnership which included Queensland’s Canning Downs, Aclaim rounded out his 15-start race career with a win in Prix de la Foret (Gr 1, 1400m) in France, having landed the Doncaster Park Stakes (Gr 2, 7f) in the UK at his previous outing. He was also runner-up in the Prix Maurice de Gheest (Gr 1, 1300m) during his four-year-old season.

The leading British-based first-season sire in 2021, Aclaim will be restricted to a book of 100 mares during his Australian stint and high-profile mares Loving Gaby (I Am Invincible), a Group 1 winner, and Tallow (Street Cry), the dam of 2020 Golden Slipper (Gr 1, 1200m) winner Farnan (Not A Single Doubt), have already been confirmed among his southern hemisphere coverings.

Only 45 vacancies remain in his southern hemisphere book.

“The mares that are already booked to him are pretty exciting with the likes of Tallow, Loving Gaby and numerous other stakes winners and stakes-producing mares,” Davies said.

“The farm’s had a big influx of high-quality mares over the past couple of weeks who are here ready to visit Aclaim.”

Out of Danroad (Danehill) mare Aris, a stakes-placegetter at the Curragh in Ireland who is a half-sister to the two-time Group 1 winner Again (Danehill Dancer), in turn is the dam of stakes winners Delphinia (Galileo) and Indian Maharaja (Galileo), Aclaim is also from the same family as proven sire Montjeu (Sadler’s Wells).

“At his fee, he fits really nicely into the market for a proven Group 1 sire and he should suit breeders over here as he is nicking with a lot of bloodlines well-known to the Australian market,” Davies said.

“Both Royal Aclaim and Cachet have Danehill in their first four generations and his stakes horses are carrying the blood of Special, Rainbow Quest, Sadler’s Wells, Nureyev, Green Desert, Roberto, Mr Prospector and Be My Guest. They’re all bloodlines that are prevalent in Australia.”

Standing at The National Stud in England, Aclaim has the two first crop stakes winners as well as four other stakes performers among his first crop three-year-olds of 50 winners from 88 runners.

Royal Aclaim made it three wins from as many starts with a two-length City Walls Stakes (Listed, 5f) success last Saturday at York, a performance which underlined the confidence trainer James Tate has in the filly, leaving him to declare the three-year-old as the fastest horse he’s ever put a saddle on.

The George Boughey-trained Cachet, who finished fourth in last year’s Breeders’ Cup Juvenile Fillies Turf (Gr 1, 1m) at Del Mar last November, is expected to return to the US later this season.

“She ran at the Breeders’ Cup meeting as a two-year-old and ran an exceptional race, finishing fourth, and she’s come back a lot better and a lot stronger this time in,” Davies said.

Aclaim also has four juvenile winners so far this year from 15 runners and in 2022 he stood for a fee of £6,000, a figure which is certain to increase substantially next year.

His own sire Acclamation (Royal Applause) also has sire son Dark Angel – himself a prolific speed influence in Europe and has his own son Harry Angel shuttling to Darley’s Kelvinside in the Hunter Valley again this year – and the promising Tally-Ho Stud-based Mehmas, the European champion first- and second-crop sire in 2020 and 2021.