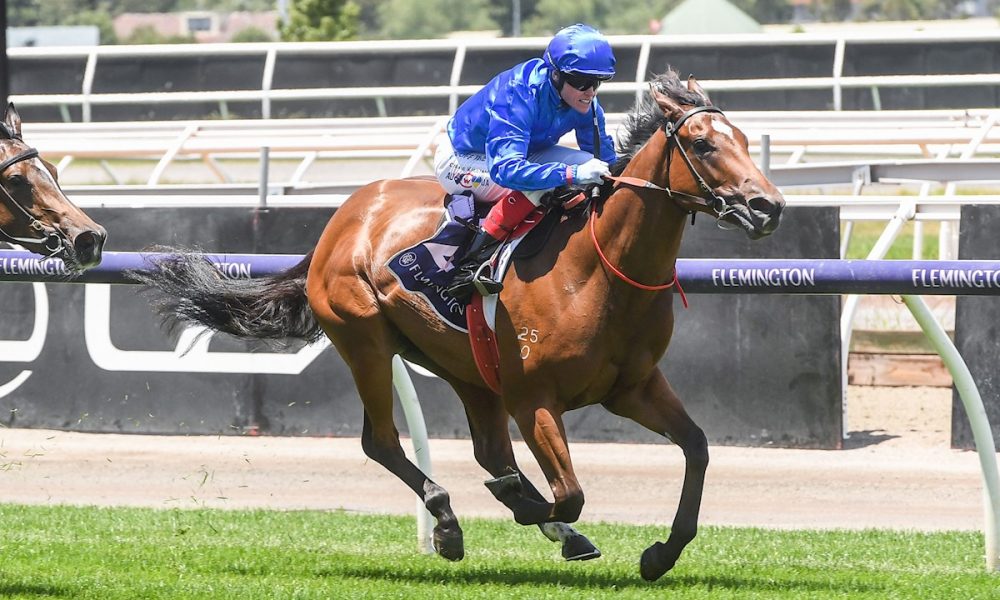 James Cummings unveiled another exciting juvenile prospect on Sunday when the Godolphin homebred Exploring (Brazen Beau) made a winning racecourse debut in the New Year Sprint (1000m) at Flemington.

Having shown up well when runner-up in an 800-metre Hawkesbury barrier trial, the daughter of Brazen Beau (I Am Invincible) broke well under Craig Williams and was soon in front.

Sent off a well-supported 10-9 favourite, the filly travelled well throughout and then gave a real glimpse of her ability in the closing stages as she dug deep to hold off late challenger Picky (Cable Bay) to score by three-quarters of a length at the line, with Ode To Joy (Written Tycoon) the same distance further behind in third place.

“She was coiled up like a cobra in the barrier and pinged out,” stable representative Sean Keogh said.

“Craig [Williams] did a lovely job getting the rail without rushing there. He was patient in the mid-stages, and she showed a good kick and put them away.”

The next challenge for Exploring could well arrive in the Blue Diamond Prelude (F) (Gr 2, 1100m) at Sandown-Hillside on February 11.

“I received a text from James Cummings, who has earmarked the Blue Diamond Preludes,” Keogh said.

“She is super precocious, and Sandown has more of a dog-leg turn than an actual corner, so that might be suitable.”

Exploring is the first foal to race out of the Group 3-placed winning Exceed And Excel (Danehill) mare Cristobal and is a sixth-generation daughter of the Golden Slipper Stakes (Gr 1, 1200m) winner Fairy Walk (Minor Portion).

Cristobal has a yearling colt and colt foal by Street Boss (Street Cry) and was covered by Spirit Of Boom (Sequalo) in October. Brazen Beau stands at Northwood Park for $44,000 (inc GST).