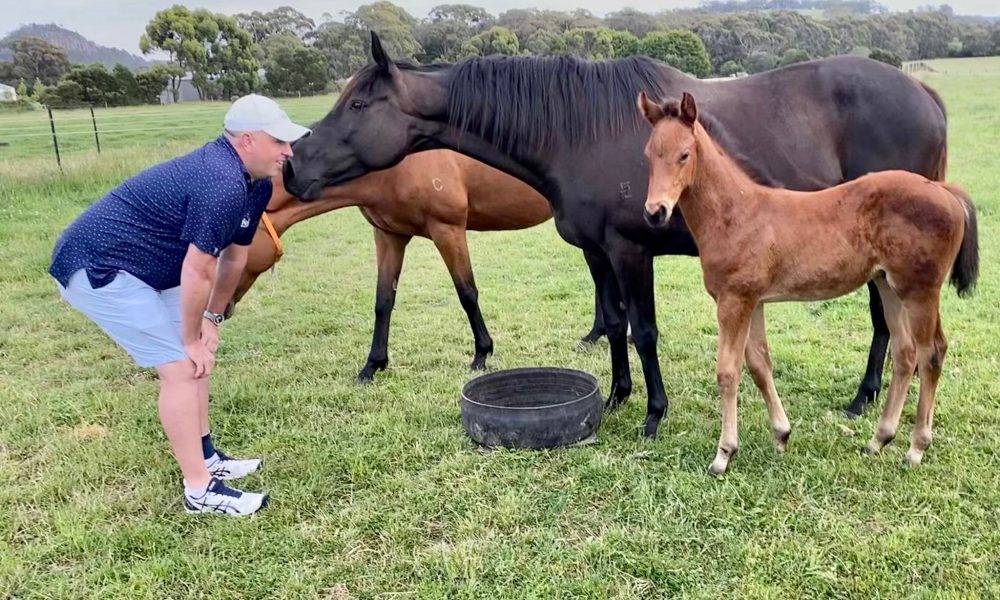 Breeder Luke Wilkinson – the man who picked out Extreme Choice (Not A Single Doubt) as a yearling – had some deserved good fortune when his colt by Newgate’s boom stallion sold for $600,000 at the Magic Millions Gold Coast Yearling Sale yesterday.

Wilkinson, who bought Extreme Choice from Inglis Classic for $100,000, sourced an admittedly cheap mare from Perth to use in a lifetime breeding right to the Blue Diamond Stakes (Gr 1, 1200m) winner, who’s posting some lethal stats despite well known fertility problems.

He spent $25,000 on Universal Moon, a daughter of the comparatively unsung stallion Universal Ruler (Scenic). There are not many stakes winners on the page, but Universal Moon did win six races up to 1200 metres, five of them in Perth. Since only around 15 per cent of horses get to win a race anywhere, these are odds Wilkinson doesn’t mind.

“There’s not a lot of black-type there but she was a handy racemare, and I always wanted to buy a mare who was competent in town,” Wilkinson told ANZ Bloodstock News.

“As an owner of a few racehorses, I know how hard it is to win in town. Sometimes they don’t get their opportunity to run in stakes races because their trainer doesn’t target them, but I think it still takes ability to win in town, and especially to be a six-time winner.

“I wasn’t too worried about her being out of a Universal Ruler mare, I just knew she was a fast mare and anything fast going to Extreme Choice would be a good thing.”

Universal Moon missed to Extreme Choice, like a lot of other mares, at the first attempt. A year later, the second go was successful, but the joy was short-lived.

“After two days, the mum lay down to get a pick of grass but she didn’t get up,” said Wilkinson. “There were two days of trying to save her, but unfortunately it didn’t work. It was pretty distressing, but the foal took to the foster mare no problems, and he has been an absolute star ever since.”

Wilkinson prepared to sell the colt as a weanling, but more adversity arose, when a temperature took the horse out of play.

“We decided to take him out of the sale just to look after the horse the best we could, because we thought he’d be very popular,” he said.

“But little did we know Extreme would go from strength to strength from siring the Golden Slipper winner (Stay Inside) to producing Espiona in the spring.”

No doubt spurred by one of those results, Stay Inside’s trainers Richard and Michael Freedman and bloodstock agent Mick Wallace were the winning bidders yesterday on the Yarraman Park-consigned colt, in whom Wilkinson will retain a small share.

“He was a stand-out foal,” says Wilkinson, who recently teamed up with Melbourne trainer Danny O’Brien as bloodstock manager.

“He was looked after really well by his foster mare, and when I saw him I fell in love with him straight away. He was just correct, athletic, good shoulder, good hindquarter, great head, very alert – just a nice style.

“So I look forward to seeing what he’ll do on the track.”

So far nine Extreme Choice yearlings have sold at an average of $399,444.

Talk of the Grounds

“Your old man’s a gelding” can’t be a sledge heard often between cheeky yearlings but it might have been whinnied around here this week.

And there’s not many sires who’ve raced the day after having their progeny sold.

But that’s the case with Kementari (Lonhro).

The Godolphin Group 1 winner went to stud in 2019 with the nickname of Special K. Sadly, that’s not what the mares called him. After only leaving six live foals from 54 covers, he was given the snip and returned to racing.

Two of those foals went through the sale ring this week, with Star Thoroughbreds/Randwick Bloodstock on Wednesday paying $325,000 for Canning Downs’ filly out of Mithila (Encosta De Lago), and Anthony Cummings yesterday taking Toolooganvale Farm’s colt from With Care (Bernadini) for $200,000.

The colt was sold on behalf of Avesta Bloodstock’s Jimmy Unwala who paid the relatively paltry sum of $26,000 for With Care carrying Kementari’s only colt. Thus, how could he not say yes to Cummings when asked to retain a share in Special K’s only son.

With his kids sent away, the seven-year-old Kementari can focus on contesting today’s Magic Millions Cup (RL, 1400m). He’ll be striving to continue a buoyant second racing career in which he’s added three wins to his first four, including last spring’s Gilgai Stakes (Gr 2, 1200m) at Flemington and the Magic Millions The Buffering (1350m) at Doomben last start, which took his earnings past $2.5 million.

There’s life in the old boy yet.

A few years ago he was instantly recognisable as one of the biggest agents going around. Yesterday he was known as the man in the Vegemite hat.

It went to what most onlookers regarded only as the casually-dressed senior chap, hidden behind a facemask and under a bucket hat in the familiar gold, red and white livery of Australia’s favourite breakfast spread.

On closer inspection it was none other than Kieran Moore.

Some retirement. Moore has bought eight lots under his Tasman Bloodstock banner this week for $3.77 million, at an average of $471,000. The Snitzel colt was bought with Tony Fung and was “our main pick”, Moore said.

“He’s by a great stallion, and out of a mare who could run, who’s by Savabeel,” he said. “He’ll be a great broodmare sire. It’s an absolute monty. His sire, Zabeel, his grandsire Sir Tristram, were both champion broodmare sires, and before that Sir Ivor. How’s he going to miss?”

Southern Highlands stud Milburn Creek reaped compensation for a cruel turn when their filly by I Am Invincible out of stakes-winner Walk With Attitude (Hussonet) was sold to Ciaron Maher for $800,000.

Four years ago, Milburn sold the mare’s second foal Spend (Snitzel) for $1.55 million at Inglis Australian Easter Yearling Sale. He went on to win at two and be stakes-placed. Last year Milburn entered his brother in the same sale, before Dame Fortune reared her ugly head.

“He just gave himself a little cut on his leg and couldn’t be taken to the sales,” Milburn’s John Muir told us. “So we had to bring him here to the Gold Coast in June.”

“Spend made close to $1.6 million so I think the brother would’ve been a million dollar colt at Easter,” Muir says. “But that’s breeding. This filly makes up for it a little.”