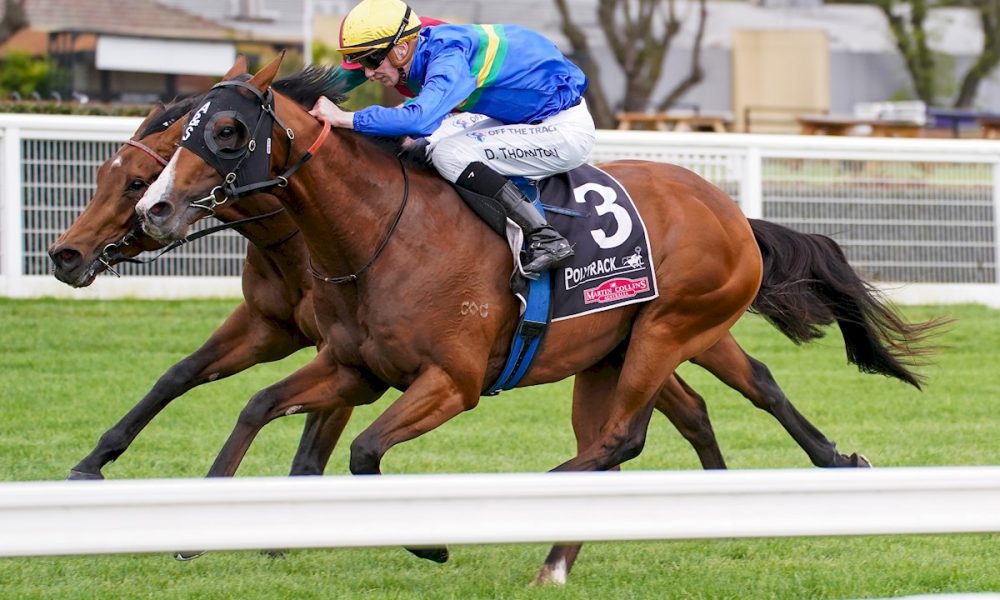 There are such ballistic stats going on in the parentage of Extreme Flight, you can almost hear them crackling.

Just as you could imagine hearing those parents swapping boasts, like a couple of boxers at a pre-fight weigh-in.

In the red corner, with gold stars, there’s Extreme Choice (Not A Single Doubt). The sire who, despite the fertility problems which require careful management from Newgate Farm, is posting some dizzying numbers.

With his oldest now three, the 2016 Blue Diamond Stakes (Gr 1, 1200m) winner has had 22 runners, from just 77 live foals of racing age, with five individual stakes winners – a fairly scary 22.7 per cent stakes-winners to runners ratio.

And when Chris Waller’s Espiona bolted to her debut victory in a Warwick Farm maiden three days earlier at long odds-on, most witnesses pencilled her in as the likely number six.

Highlighted, of course, by Stay Inside’s Golden Slipper (Gr 1, 1200m) win this year, Extreme Choice has made a start to his career that has Newgate’s Henry Field describing him as “freaky elite”.

But over in the blue corner, with white stars – the colours carried in her sole contest in a Coffs Harbour barrier trial – you could imagine Extreme Flight’s dam looking over with a “Yeah? So?”.

Abscond, a daughter of Galileo (Sadler’s Wells), has had four foals to race. Three have been stakes winners. Even remembering she’s a broodmare and not a sire, 75 per cent ain’t half bad.

After some poor fortune in her non-racing career, for a first go at stud she threw a $185,000 yearling who became Invincibella. We all know about the deeds of her sire, I Am Invincible (Invincible Spirit). Well, for a first crack at breeding, Abscond left the mare who is still the super-stallion’s top earner, with a tick over $3 million, earned through a Group 1 and four Group 2 successes, as well as three victories at the lucrative Magic Millions raceday in January among her 12 wins.

A second filly, Temolie (Star Witness), fetched only $25,000 and duly failed to emerge from her big half-sister’s shadow. But for a third try Abscond went to the son of Snitzel (Redoute’s Choice), Sizzling, and that $90,000 yearling colt has become that sire’s best performer as well, his only stakes-winner in Secret Blaze.

A return to Sizzling produced the unraced $50,000 filly Well Done You, before a dice-roll on Extreme Choice yielded Extreme Flight, who, helped by his impressive looks and Invincibella’s achievements, sold for $340,000 to Anthony Cummings at last year’s Inglis Easter sales.

After dabbling a little in horses late last century, the Brisbane pharmacist made a splash with two major yearling purchases at Karaka in 2001.

He paid NZ$60,000 for a Red Ransom (Roberto) filly who became Kidnapper, a speedy city winner of four races, who can lay claim to a cluster of class records by herself or descendants. She threw dual-Listed winner Cape Kidnappers (Commands) and has a grandson with the Eagle Farm 1000-metre track record to his name in Meet Mr Taylor (Turffontein).

But Grant-Taylor went harder at that same Karaka sale to acquire a daughter of Zabeel (Sir Tristram) in Luminata for NZ$250,000. As is so often the case, the fortunes of his two purchases didn’t go according to price.

Luminata underwhelmed on the track, winning two races at Moe, and has had a chequered career at stud. Beside 18 listed matings the word “missed” comes up six times, while twice appears “foal deceased after birth”.

Her best-performed offspring was her fourth one to race, Light Up Manhattan (Manhattan Rain), who won only one from eight but crossed the line fourth – later gaining third after a disqualification – in the 2014 VRC Derby (Gr 1, 2500m).

Luminata’s initial cover, by Fastnet Rock (Danehill), had produced Fastnet Light. From ten starts he won once, where relatives like Invincibella might fear to tread – at Birdsville.

“I’ll never forget being at Coolmore when they led Galileo out,” Grant-Taylor tells It’s In The Blood. “His action was like something I’d never seen. I described it as him lilting across the paddock. There was something different about him.”

The result was Abscond, and Grant-Taylor’s excitement soon began to build.

“When she was broken in,” he says, “the breaker called me and said, ‘I’ve just done two other Galileo fillies and yours is so much better. Let me know when she has her first start!’”

While Kidnapper was the speedster, Grant-Taylor was “hoping Abscond would be my Oaks filly”. Trainer Guy Walter had high hopes too, but disaster struck on the day of that first start, a cut forcing a scratching.

“The cut nicked the bone and must’ve caused a spur, and then there was infection in the leg,” Grant-Taylor says. “In the end she was compensating and damaged the tendon.”

After a break, a second try with Coffs Harbour-based Gordon Yorke produced that one barrier trial, before more injury led to retirement.

With Abscond standing 17-hands, some care to avoid large stallions was prescribed. But the pharmacist was so blown-away with his first sighting of I Am Invincible he threw that note away, and bit the bullet. He might have dodged one as well.

“Brett Howard, my bloodstock adviser, felt we might have been saved by the fact it was Abscond’s first foal,” Grant-Taylor says of the perfectly-sized and superbly-performed Invincibella. “Abscond’s size is always a factor, making sure we don’t breed something too big.”

Howard, consulting pedigrees expert Brian Messner, divines shortlists of four or five compact stallions for Grant-Taylor to consider with Abscond. In 2017, going to Extreme Choice – at 15 hands plus change – was a mating that didn’t necessarily scream “magic”, Howard says, but it came in at above average.

And Grant-Taylor’s improved luck with this female line continued. Not only was Abscond booked for Extreme Choice’s first season, but his first day, as service No.2. And the mating stuck. Grant-Taylor would soon realise how fortunate that was.

With bookings revised as Extreme Choice’s sub-fertility became apparent, he’d have just 48 live foals from around 90 covers in that first season. It’s a condition Newgate is taking steps to manage.

“We’ve consulted pretty much every fertility specialist there is – southern hemisphere and northern hemisphere,” Field says. “All we can do is look after him.”

This means limiting Extreme Choice to one mare a day, with a book this season Field says should number around 75 mares, with a hope around 50 will bear foals.

“The live foal numbers might end up similar, but the chance of getting your mare in foal is much greater,” Field says.

And it’s easy to see why breeders will still be lining up to take their shot. Aside from the small matter of a Golden Slipper winner in his first crop, since last Wednesday he’s had Extreme Warrior win the Blue Sapphire (Gr 3, 1200m) to cement Coolmore Stud Stakes (Gr 1, 1200m) favouritism, Extreme Flight take the Gothic, and Espiona make her debut.

With none of his two-year-olds having raced yet, his progeny also includes Group 2 and Group 3 winner Tiger Of Malay, and Rosehill Listed winner Xtremetime, who died in a racing incident at Randwick in August.

“Statistically he may be the best young sire on the planet, looking at those numbers,” says Field, who’s reporting increased interest from European broodmare owners keen to breed from Extreme Choice to northern hemisphere time.

“There’s no stallion on Earth who’s doing what he’s doing, admittedly from a small number of mares. To have a Slipper winner in your first crop is freaky, let alone having a 23 percent stakes-winners (to runners) ratio.

Abscond also had a Spirit Of Boom (Sequalo) colt, bought by the Hong Kong Jockey Club for $275,000 this year, has a yearling filly by Russian Revolution (Snitzel), and – with Grant-Taylor perhaps somewhat emboldened by her successes – she’s due to foal to I Am Invincible any day now.

After such an upswing in fortunes with his Luminata-Abscond line, Grant-Taylor has been rewarded for his patience.

“It swings around eventually. That’s the game,” he says. “If you’re not prepared to take the lows then you’ll probably never get the highs. Hopefully you get enough highs to pay for the lows.”

The effervescent Field also has a saying that keeps hopes high with his brilliant but restricted stallion.

“Well,” he says, “if Northern Dancer could do it with 40 foals a year, hopefully Extreme Choice can, too.”