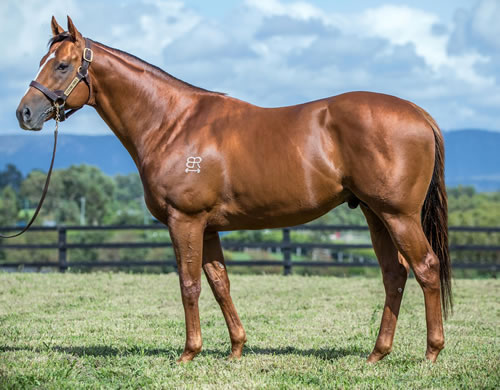 Luck is extremely important quite often in the making of a thoroughbred, and veteran South Australian hobby breeder Brenton Parker has had his share of both kinds.

In 2002, he and wife Liz bought a rising two-year-old out of a paddock who became Madame Flurry (Perugino). She wasn’t up to much on the track, winning once at Naracoorte, but the Parkers kept her for their nascent breeding interests.

In 2006, for a second foal, they sent her to American shuttler Good Journey. The mating produced Happy Trails, a South Australian Horse of the Year who won three Group 1s, all at Flemington, and was second in three others, including by a nose in Shamus Award’s Cox Plate and to Foreteller an an Underwood Stakes.

Happy Trails won $3.3 million in prize–money. And the Parkers sold him at Adelaide Magic Millions for $11,000.

“He’s still the cheapest horse we’ve ever sold,” Brenton tells It’s In The Blood, with a smile. “We’d passed-in a filly from another mare, and I thought, ‘We can’t pass them all in, so we’d better sell’. In hindsight, you’d have kept him, but it wasn’t to be. But in any case, what Happy Trails did got us on our way as breeders.”

Parker, who’d run an import business for camping and leisure goods and parlayed a mainly punting-based interest in thoroughbreds into breeding in the 1990s, enjoyed more success with Madame Flurry. Three other stakes-winners emerged, all of whom fetched far better prices: Heart Of A Lion (Lion Heart), a $45,000 yearling who won a Listed race at Oakbank; All Too Huiying (All Too Hard), who fetched $150,000 and won three Listed events in Victoria; and Danish Twist, who the Parkers raced for a Group 3 and a Listed win before selling to Newgate Farm as a broodmare in 2018, for $575,000.

Madame Flurry was retired from breeding last December and died after an illness earlier this year, but the Parkers now have hopes of breeding-on from the family, with her last four foals being fillies.

Back to 2002, and the Parkers also plunged in to buy, in a private sale, their first broodmare, a daughter of Full On Aces stallion King’s High named Eastern Charm. Unlike the Naracoorte maiden winner Madame Flurry, she earned better credentials, since her second foal, the gelding Zip Zip Aray (Bellotto), had won the Group 1 Goodwood at Morphettville three months earlier. Still, the Parkers secured the then nine-year-old mare for less than six figures – a very reasonable outlay compared with today’s prices, and one which looked better still when her fifth foal, Zipanese, won a stakes race in Adelaide in 2007.

Not much else happened through Eastern Charm, however, including a 2011 filly by Golden Slipper winner Stratum who the Parkers kept, called Tamarind Lane. She also appeared not overly blessed with ability, and when a leg issue arose the Parkers retired her as an unraced three-year-old.

But from that humble background has sprung a new source of excitement.

Parker had first sent Tamarind Lane to Choisir, producing Inglesias, who netted a handy $110,000 as a yearling colt but won only two races in the bush. Next up came Foxwedge, for Rua Raposa, who looked handy in winning her second start at Coffs Harbour for Kris Lees but was retired after just two more, with knee issues. Tamarind Lane went to Kermadec to produce Magical Ride, who still races with the Parkers in the ownership and has won two of her nine, at Strathalbyn.

But from the mare’s next mating came a colt who now appears as well-bred as he is named: Extremely Lucky.

The now three-year-old gelding served notice he could become the next in a burgeoning line of stakes-winners for his remarkable sire, Extreme Choice, in blitzing a Benchmark 72 over 1050 metres at Morphettville last Saturday by more than four lengths.

The cover brings a 3×3 cross of Redoute’s Choice – sire of Stratum and Extreme Choice’s sire Not A Single Doubt. Far further back there are liberal splashes of the great British-bred blue hen Plucky Liege (1912, by Spearmint, by Carbine) in the form of three sons in Bois Roussel and, more heavily, Sir Gallahad and Bull Dog.

Those pedigree highlights can be considered bonuses, for it was with an extreme amount of luck that this colt came to be in the first place – another reason for the Parkers to regard Newgate as one of their favourite parts of Australia.

“I like first season stallions,” Parker says. “Every year I’ll go to one, because we breed to sell. It’s always a bit of an unknown but they always get a bit of attention, and of course if you’ve gone to a third or fourth season sire and their progeny by then aren’t showing much, you might be in trouble.

“Apart from that, Extreme Choice seemed like a good mating, both price-wise, and my pedigrees advisor said he was a good mating for Tamarind Lane.”

Tamarind Lane was booked for an early September covering, heading to Newgate from her nearby main residence of Edinglassie Stud.

By then, however, the bad news about Extreme Choice had emerged. The Blue Diamond and Moir Stakes winner was on his way to a first crop of just 48 live foals from 118 covers, a fertility rate of just 46 per cent.

“I think as soon as they scanned their first ten or dozen mares covered by him they realised all was not well,” Parker says. “But Newgate were good in that respect, in letting everybody know, and saying that if we were negative we’d have had to find another stallion.”

The Parkers waited pensively, but soon Edinglassie’s Mick Talty rang with the news. They’d been one of the lucky ones.

Parker doesn’t join in on the theories that now abound about breeding to Extreme Choice. That’s become a popular game indeed, since from just 50 runners now late in his second season, Extreme Choice has left 11 black-type winners, at a phenomenal stakes-winners-to-runner ratio of 22 per cent.

“He’s certainly out of our league now,” Parker says with a laugh of Extreme Choice, in whom a share – believed to be one-fiftieth – sold to James Bester Bloodstock at the Magic Millions Broodmare Sale this week for $450,000.

But making that successful mating even more fortuitous, Tamarind Lane – who was four-from-four when Extremely Lucky arrived – missed through her next three coverings, twice to Divine Prophet, and once to Pariah. She does now have an All Too Hard weanling colt on the ground, but wasn’t served last year after his difficult arrival.

Then a little more good fortune came about, perhaps in disguise. The yearling Extremely Lucky was entered for the Gold Coast sale of 2020 and Melbourne Premier, but after a throat issue was found, he was withdrawn from both.

“He wouldn’t have passed the post-sale scope,” Parker says. “So we thought we’d give him a go on the track and see if the throat’s an issue. Luckily, it never has been.”

The Parkers thought they’d been blessed when Extremely Lucky debuted for trainer Sam Burford with a two-length win at Murray Bridge last December. The phones started ringing, and he changed hands again, in a private sale through his new trainer Will Clarken and a new group of owners, one of whom then also bought Tamarind Lane from the Parkers.

Despite Saturday’s impressive romp at long odds-on, Parker isn’t wondering if Extremely Lucky might end up evoking memories of Happy Trails as one who might have got away.

“If he comes along and wins Group 1s I’ll be very happy, not just because I’m the breeder but also because I’ve got two siblings of his to breed from and a half-sister to the dam,” the 74-year-old says, referencing Magical Ride and Rua Raposa, and a bush winner named Tchotchke (Hinchinbrook-Eastern Charm).

“So I wish the new owners well.”