Fabulous five for Moreira makes it a ‘Magic’ 900 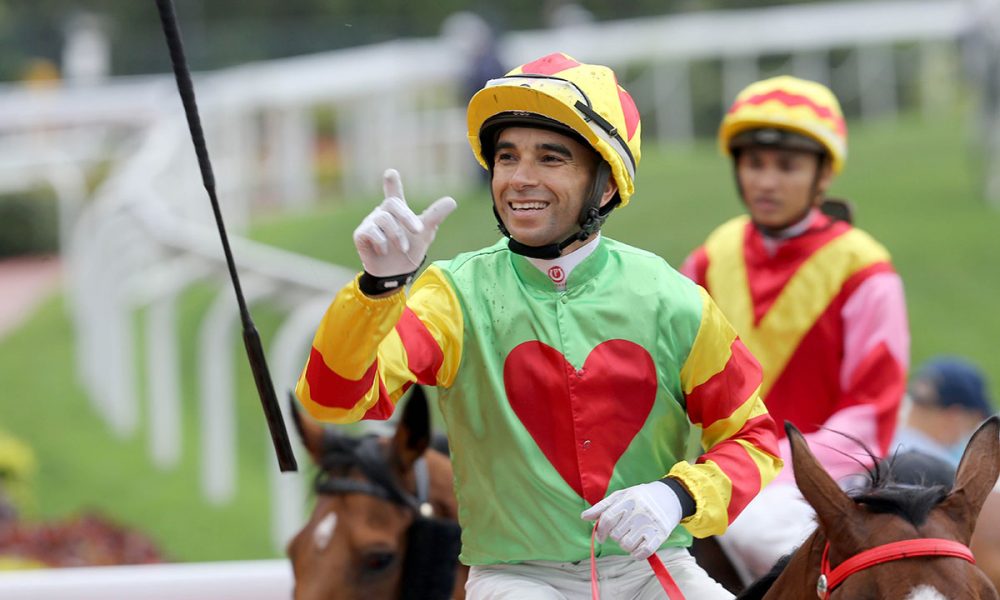 Joao Moreira became only the fourth jockey in Hong Kong history to reach 900 wins and he did so in style with a five-timer at Sha Tin yesterday.

“I wasn’t counting!” the Brazilian ace said after his fourth on the board, Picken (Duporth), had sealed the milestone win at the end of a tough duel for the Class 3 Nam Shan Handicap (1400m).

Only the retired greats Douglas Whyte and Tony Cruz, and Moreira’s brilliant championship rival Zac Purton, have reached the 900 mark previously. Moreira achieved it at his 4,094th ride, at a win strike rate just shy of 22 per cent, in only his seventh Hong Kong season.

“It’s a great mark to reach but I want to be looking back on it, leaving it behind,” he said, mindful of his unrelenting battle to regain the jockeys’ championship. He ended the day on 901.

Moreira used everything he had to seal the win on the John Size-trained Picken as Neil Callan’s mount Toycoon (Turffontein) challenged with determined intent. The two horses responded to the power-packed driving of their respective pilots but it was the one they call ‘Magic Man’ who conjured enough to get his mount’s nose past the post in the nick of time – the margin was a short-head.

“It’s amazing how hard it was to win this race! Neil’s horse didn’t want to give up but fortunately I had the edge on him at the right time,” Moreira said.

“We knew Picken was coming to form – he’s at a quite nice place in the handicap and we knew he was there to win his race and I’m very lucky to be getting on him at the right time.”

Juneau on the up

Moreira’s five-timer took him back to the top of the jockeys’ premiership with 94 wins to Purton’s 92, although the Australian excelled with a double. The Brazilian’s haul included a smart success on the upwardly mobile Juneau Park (Ocean Park) in section two of the Class 4 So Uk Handicap (1400m).

The Size-trained four-year-old made it two wins on the bounce at only his fifth start and his rider was suitably pleased with the effort under a 60 kilogram impost.

“My opinion is high, he’s a nice horse,” Moreira said. “Only good horses do what he has done – I know he had a suitable run but he had to improve to win today carrying top-weight.

“He hasn’t been exposed, he hasn’t raced too many times and he’s only gone forward. This indicates to me that he’s not a bad one.”

The New Zealand-bred gelding raced fifth along the fence, shifted out at the top of the straight and wound up into a raking run that took him to the lead 250 metres out. The bay then kept on gamely to win by half a length.

“He’s a bit big so he needs momentum and he had that today, it helped him to win,” Moreira continued. “It’s hard to predict where he’ll get to ratings-wise but the improvement he’s shown means he’s pointing up.”

Moreira kicked off his quintet with an easy six-length win aboard the John Moore-trained Above (Tavistock) in the Class 4 Tai Hang Tung Handicap (2000m), and then sealed the Class 3 Lai Kok Handicap (1200m) on the Danny Shum-trained Fantasy (Sizzling).

He capped the day with a sublime score aboard the Size-trained Shining Ace (Testa Rossa) in the finale, the Class 2 Chak On Handicap (1200m), stealing a march and holding the talented pair of Computer Patch (Exceed And Excel) and Transcendent (Dabirsim) in the minor placings.

“John (Size) and I had in the back of our minds that he won on a softer surface and we thought he would handle it, but he actually handled it better than we thought. It was an impressive win and the handicapper is probably going to hammer him but he deserves to win like that,” Moreira said.

“John has done a great job with yet another horse, he’s got him up in his rating and he’s won impressively in Class 2.”

Size’s treble today was his first such score this term. His last three-timer came on May 25 last year, when Shining Ace was again one of his winners on the day. The 11-time champion trainer’s haul took him to 33 overall this term, 12 behind premiership leader Ricky Yiu.

Purton again maintained tabs on his opponent though and struck a double in tandem with trainer Paul O’Sullivan.

Grade One (Manhattan Rain) made the most of a drop to Class 4 and burst to a half-length win in the Shek Kip Mei Handicap (1200m); and Purton ensured Band Of Brothers (Sakhee’s Secret) got back on the winning trail with a sweetly-judged ride to take the Class 3 Pak Tin Handicap (1600m).

War Of Courage (Declaration Of War) held off Valiant Dream (Magnus) by a short-head in a driving finish to the Class 3 Cheung Sha Wan Handicap (1000m). Chad Schofield on the winner defied Blake Shinn’s late effort with a last-gasp thrust that saw his mount dip his head as the pair flashed past the post.

Victor Wong set the ideal tempo for a make-all win aboard the Manfred Man-trained Care Free Prince (Street Sense) in section one of the Class 4 So Uk Handicap (1400m).