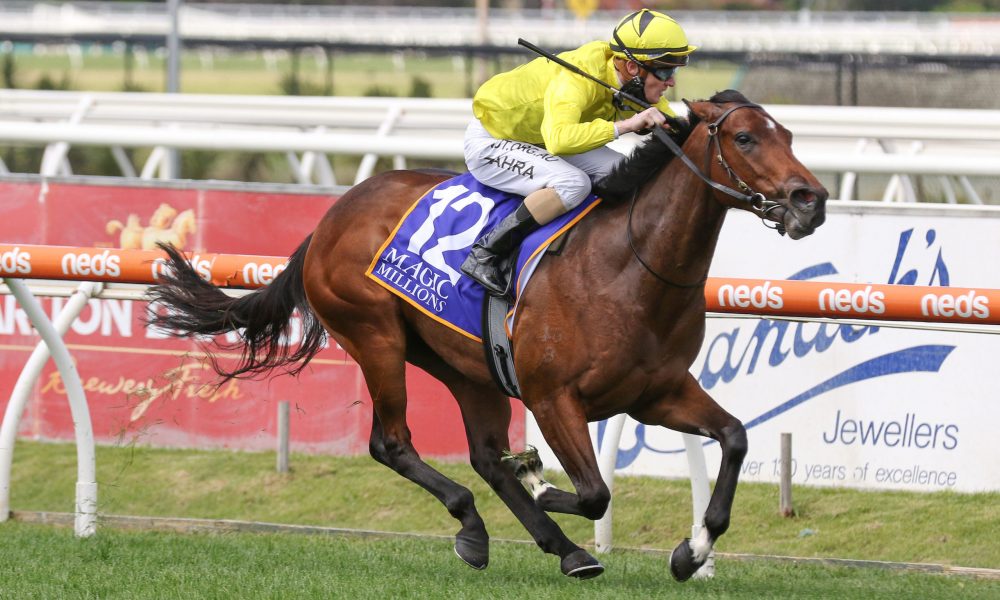 2 f I Am Invincible – Anatina by Fastnet Rock

The Debutant Stakes (Listed, 1000m) has been won by subsequent Group 1 winners like Qafila (Not A Single Doubt), Meurice (Strategic) and Testa Rossa (Perugino) on debut, and trainers Ciaron Maher and David Eustace hope that Fake Love (2 f I Am Invincible – Anatina by Fastnet Rock) will be able to join their ranks after her impressive victory at her first start on Saturday.

Backed into $5 equal favourite, Fake Love showed plenty of professionalism, scooting along on the lead to defeat Extreme Warrior (Extreme Choice) by a length and a quarter with a head to Naples (Street Boss) in third, impressing her rider Mark Zahra.

“I’ve had a bit to do with her and ridden her in both of her jump-outs. Ciaron’s stable is great at getting two-year-olds to the races early in the season and she is a fine example,” he said.

“She was quickly out and when she kicked she gave nothing else a chance. She has showed speed and she’s beautiful. She sat in the gates and never turned a hair in the gates and was very professional.”

Bred by Segenhoe Thoroughbreds, Fake Love is the third named foal – and the first winner – out of dual Listed winner Anatina (Fastnet Rock), who was narrowly beaten in the 2014 The Galaxy (Gr 1, 1100m) by Tiger Tees (Dubawi).

She was sold to Oakmont, the outfit of Colt Pike and Hannah Mathiesen, at the 2019 Magic Millions National Weanling Sale for $380,000, and while she was offered at this year’s Magic Millions Gold Coast Yearling Sale, she was passed in for $425,000 off a reserve of $450,000.

Anatina has a Hellbent (I Am Invincible) yearling colt, while she missed to both So You Think (High Chaparral) and Deep Field (Northern Meteor) last year. She is a half-sister to another Listed winner in Pricked (Thorn Park), as well as Quack It (Ustinov), the dam of Villiers Stakes (Gr 2, 1600m) hero Quackerjack (Not A Single Doubt).

The Magic Millions 2YO Classic is likely to be the aim for her descendant Fake Love, with the stable aiming to take back-to-back victories in the juvenile feature after Away Game (Snitzel) – who is also raced by Mathiesen – took victory last year.

In fact, Maher drew favourable comparisons between the two fillies.

“She’ll be targeted towards the Magic Millions Classic now. She’s got a bit of black-type and hopefully she can follow in the same steps,” Maher said.

“Away Game, she was very durable. This horse is probably of a similar shape, but probably a little bit stronger even. You never know, hopefully she’s a little bit better.

“To think Hannah came down here and worked for us for six months and found Away Game and then to find another one the very next year. It’s great for David Gillies too, it is one of his first horses in the stable and had his colours on.”