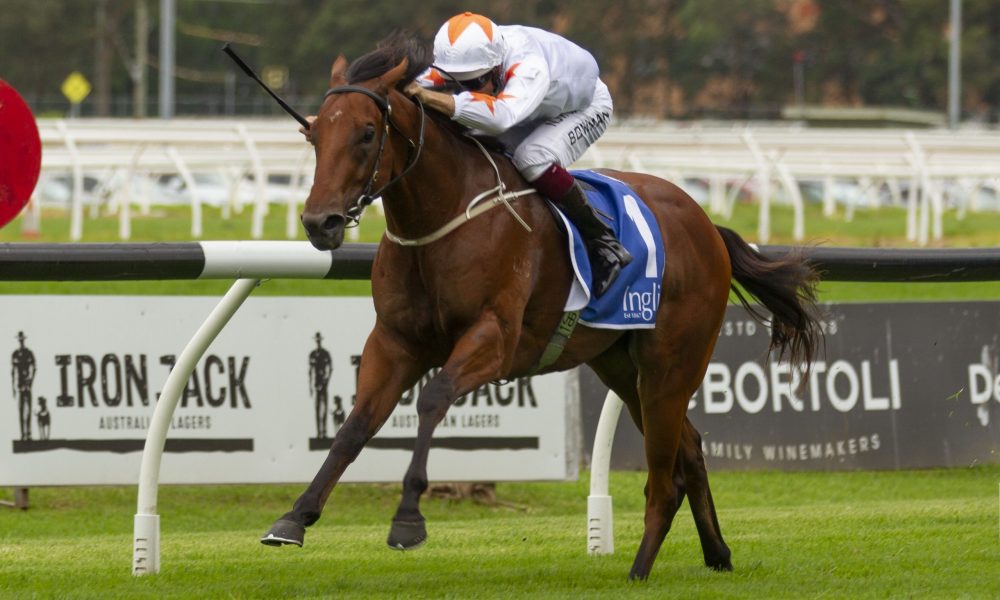 Now the winner of four of his five starts, Farnan came firmly into contention for next week’s $3.5 million feature after his win in the Silver Slipper Stakes (Gr 2, 1100m) a fortnight earlier at Rosehill, with the colt advancing to an even higher level on Saturday.

Starting a well-supported $1.80 favourite, Farnan was quickly away and soon took the lead but was then pressured on occasions before drawing clear shortly after turning into the straight.

From that point on he was not threatened, winning comfortably by a length and three-quarters from the Blue Diamond Stakes (Gr 1, 1200m) winner Tagaloa (Lord Kanaloa) in the slick time of 1:09.86 on the Soft 7 track.

The TAB now has Farnan as their $5 favourite for the Golden Slipper, with Tagaloa at $6, Hanseatic (Street Boss) $7 and Saturday’s impressive Flemington winner Minhaaj (Exceed And Excel) next at $9.00.

Later on the Randwick programme, the high–class sprinter Nature Strip (Nicconi) returned to peak form at his second run back from a spell when taking out the weight-for-age Challenge Stakes (Gr 2, 1000m), returning outstanding sectionals in the process.

The time for the 1000m journey, 56.87, was very quick on a Soft 6 track, but was still 1.14 seconds outside the track record of Redzel (Snitzel), who finished three lengths back as runner-up on Saturday.

Another to impress on the watch, while not in the same league as Nature Strip, was the Gerald Ryan-trained filly Villami (Foxwedge), who demonstrated her talent with an impressive first-up win in the Fireball Stakes (Listed, 1100m).

Having only her eighth start and her first since October, Villami was quickly away from her outside barrier (seven), went straight to the front after travelling nicely at a solid tempo, and then dashed clear at the 300 metres before going on to score quite comfortably by a length and a quarter.

In fact, Villami’s time was only 0.59 seconds outside the track record.

Especially noteworthy was Villami recording four successive 200-metre sections of sub-11 seconds, which is rarely achieved, resulting in her clocking a brilliant 42.61 for that 800-metre mid-race section.

The runner-up was the Peter and Paul Snowden-trained colt Cosmic Force (Deep Field) and his performance was extremely good.

Having his first start since early November and conceding five kilograms to the winner, Cosmic Force settled back in fourth place and kept making ground under his top weight (59 kilograms) to finish second, beaten a length and a quarter.

A winner of three with a further four placings from nine starts, Cosmic Force showed his talent with a seven and a quarter length victory in last year’s Pago Pago Stakes (Gr 3, 1200m), prior to racing below his best when finishing eighth as favourite for the Golden Slipper a week later.

Saturday’s Flemington meeting featured the Newmarket Handicap (Gr 1, 1200m) and, in a high–class renewal of the famous sprint, the Godolphin-raced colt Bivouac (Exceed And Excel) staged an outstanding performance in victory.

Always close to the pace, Glen Boss dashed the colt clear on passing the 200 metres before Bivouac went on to easily defeat the classy filly Loving Gaby (I Am Invincible) by two and a half lengths in a time of 1:09.21 on the Soft 5 track.

Meanwhile, in the opening event at Flemington, the aforementioned Minhaaj, leapt to the fourth line of betting for Saturday week’s Golden Slipper after her highly impressive victory in the Thoroughbred Breeders Stakes (Gr 3, 1200m) for two-year-old fillies.

The Lindsay Park-trained and Shadwell-raced filly, who was advancing in class after her easy win on debut in a two-year-old maiden (1000m) at Bendigo on February 15, raced close to the speed before moving away to an easy four and a half length victory.