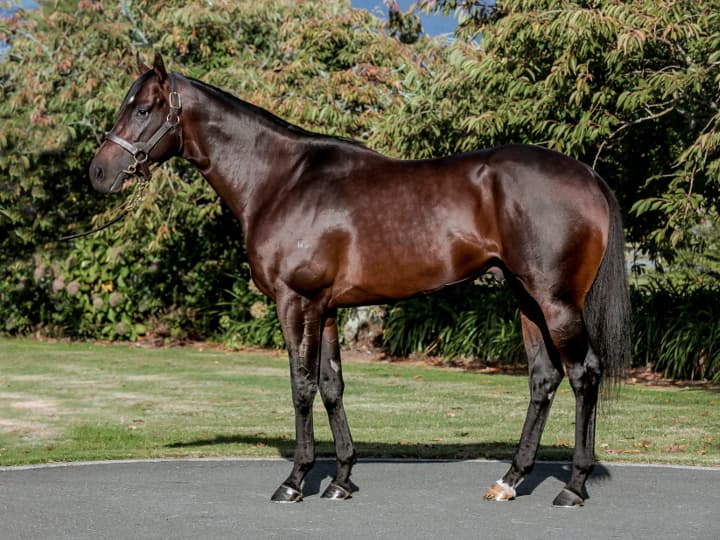 Ardrossan – Codigo (2 g ex Sophia Magia by Per Incanto) provided Waikato Stud’s first-season sire Ardrossan (Redoute’s Choice) with a first individual winner from three starters when scoring on debut in a two-year-old maiden (1000m) at Matamata. Bred by Dame Lowell Goddard and raced in partnership with Waikato Stud, Codigo held off a challenge from favourite She Turns Heads (Headwater) by a head. “He was brave as he was marginally slow from the barrier and then he got headed in the straight, but fought back like a good horse,” winning trainer Stephen Marsh said. “We’ll see how he comes through this but I’d like to take him to Trentham later in the month for the Wellesley Stakes as I think he would be suited to a big, roomy surface like that.” Waikato Stud principal Matt Chittick said: “The whole story is just so good around this guy as Dame Lowell bred him and then we got involved when he was a yearling. The syndicate has worked tirelessly to boost [Ardrossan’s] numbers and I think the wonderful thing is that he appears to have really stamped his first few crops and is leaving consistently good types.” Codigo is the only foal to race out of the winning Per Incanto (High Chaparral) mare Sophia Magia. Ardrossan has seven Book 1 lots catalogued for the New Zealand Bloodstock Karaka Yearling Sale. He stands for a fee of NZ$6,000 (+ GST).

Deep Impact – The Koshiro Take-trained Light Quantum (3 f ex Illuminant by Quality Road) gained a first stakes win when swooping late to take out the Sho Shinzan Kinen (Gr 3, 1600m) at Chukyo, providing the late Deep Impact (Sunday Silence) with a 191st individual stakes winner. The three-year-old filly stayed on best of all down the outside to beat Pace Setting (Showcasing) by a length with the same distance further back to Toho Galleon (Real Steel) in third. Light Quantum is the only foal out of the Grade 1-winning Quality Road (Elusive Quality) filly Illuminant, herself a half-sister to the stakes winner Sparkling Number (Polish Numbers). Deep Impact, who died in July 2019, has had 1709 starters.

Frosted – Ice Dancing (3 f ex Welcome Dance by Henny Hughes) provided Darley stallion Frosted (Tapit) with a 15th individual stakes winner when coming home a convincing victor of the Santa Ynez Stakes (Gr 3, 7f) at Santa Anita. The Richard Mandella-trained three-year-old filly was moved to the outer of the five-runner field turning for home by jockey Flavien Prat and made up ground in stylish fashion before powering away inside the final furlong to beat Satin Doll (Congrats) by three and a quarter lengths with a further head back to long-time leader Fast And Shiny (Bernardini) in third. Ice Dancing is the best of four winners to race out of the stakes-winning Henny Hughes (Hennessy) mare Welcome Dance, herself a half-sister to the stakes winner Dancing To Town (Speightstown). Frosted, who has had 342 starters, stands at Jonabell Farm for a fee of US$10,000 (approx. AU$14,430).

Good Magic – The Bob Baffert-trained Reincarnate (3 c ex Allanah by Scat Daddy) registered a maiden stakes success when scoring in the Sham Stakes (Gr 3, 8f) at Santa Anita, providing Hill ‘N’ Dale Farms stallion Good Magic (Curlin) with a seventh individual stakes winner. Ridden by Juan Hernandez, the three-year-old colt broke well from the barriers and made virtually all in the five-runner field, battling on gamely in the closing stages to deny the persistent challenge of Newgate (Into Mischief) by a neck. Stablemate and odds-on favourite National Treasure (Quality Road) finished third, beaten a length by the winner. A US$775,000 (approx. AU$1.11 million) purchase at the 2021 Keeneland September Yearling Sale, Reincarnate is the most expensive yearling by his sire. A half-brother to winner Astro Pop Kid (Lemon Drop Kid), he is the fourth foal out of the stakes-winning Scat Daddy (Johannesburg) mare Allanah, herself a half-sister to Grade 2-placed winner Over Emphasize (Overanalyze). Good Magic, who has had 65 starters, stands for a fee of US$50,000 (approx. AU$72,140).

Magnus – Sight Success (6 g ex Tarp by Bletchley Park) provided Magnus (Flying Spur) with a 27th individual stakes winner when gaining a deserved victory in the Bauhinia Sprint Trophy (Gr 3, 1000m) at Sha Tin. Ridden by Vagner Borges for John Size, the six-year-old gelding hit the front 150 yards from home before keeping on well to deny Rewarding Together (Pierro) by a neck, going one place better than for his last-start second behind Wellington (All Too Hard) in the Hong Kong Sprint (Gr 1, 1200m). The Caspar Fownes-trained Sky Field (Deep Field) finished a further length behind in third. Out of the winning Bletchley Park (Caerleon) mare Tarp, Sight Success is a half-brother to winners Mr Undercover (Star Witness), Got You Covered (Bel Esprit) and Beneath The Covers (Alfred Nobel). Magnus, who has had 686 starters, stands at Widden Stud for a fee of $16,500 (inc GST).

Maurice – Lagulf (4 c ex Abandonne by Falbrav) provided Shadai Stallion Station sire Maurice (Screen Hero) with an 11th individual stakes winner, when scoring in the Sho Nakayama Kimpai (Gr 3, 2000m) at Nakayama. Ridden by Keita Tosaki for trainer Yoshitada Munakata, the four-year-old entire left it late in the day, but stayed on well to have his head down at the right time to beat Kurino Premium (Orfevre) by a nose, with a further head back to Feengrotten (Black Tide) in third. Lagulf is the first foal out of the Falbrav (Fairy King) mare Abandonne, herself a half-sister to winner Super Akira (Johannesburg). Maurice, who has had 493 starters, stands for a fee of ¥4,000,000 (approx. AU$44,110).

Reset – Mission Phoenix (6 g ex Oh Susannah by Fastnet Rock) provided his sire Reset (Zabeel) with a 36th individual stakes winner from 830 starters when scoring a narrow success in the January Cup (Listed, 2000m) at Rosehill. Ridden by Tyler Schiller for trainer Mark Newnham, the six-year-old gelding made the running throughout the contest and battled gamely when pressured late in the day to beat Aleas (Archipenko) by a head, with a further neck back to Bonny Ezra (Road To Rock) in third. Mission Phoenix is the best of two winners from as many to race out of the Fastnet Rock (Danehill) mare Oh Susannah, herself a daughter of Frank Underwood Cup (Listed, 1900m) winner Lake Susannah (Filante). Reset died in May 2021.

Russian Revolution – Russian Roni (3 g ex Cadet Roni by Colonel John) provided Newgate Farm stallion Russian Revolution (Snitzel) with a third individual stakes winner from 105 starters, when making a successful raid on the Tasmanian Guineas (Listed, 1600m) at Hobart. The three-year-old was sent south by his trainers Gai Waterhouse and Adrian Bott in search of a suitable stakes race and made full use of the opportunity to make virtually all under Winona Costin, battling well at the finish to fend off late challenger Bello Beau (Brazen Beau) by a head. The pair pulled four and three-quarter lengths clear of the third-placed Royal And Tough (Tough Speed). The win marked a third success in a row for the progressive gelding, after he landed contests at Bendigo and Sandown last year. A $150,000 Inglis Premier purchase from the Sun Stud draft for his trainers in conjunction with Kestrel Thoroughbreds, Russian Roni is the best of two winners for stakes-winning import Cadet Roni (Colonel John). Russian Revolution stands for a fee of $71,500 (inc GST).

Savabeel – Cruz Missile (3 g ex Cruz Control by Centaine) became the 129th individual stakes winner for eight-time champion sire Savabeel (Zabeel) when winning the Gingernuts Salver (Listed, 2100m) at Pukekohe. The Stephen Marsh-trained gelding was sent off the $4 favourite in an open edition of the three-year-old restricted race, but came out on top in a three-way finish, defeating Devildom (Almanzor) by a neck, while Bitcoin (Tarzino) was a nose further back in third. Cruz Missile was a $160,000 buy for Bruce Perry Bloodstock from the draft of Little Avondale Stud at the 2021 New Zealand Bloodstock National Yearling Sale. He is the final foal of nine, and four winners, out of deceased mare Cruz Control (Centaine), who produced as her first foal the stakes-placed Silveron Wings (Black Minnaloushe). Cruz Missile’s grandam is the Silver Shadow Stakes winner (Gr 3, 1200m) Soda Springs (Zephyr Bay). Savabeel, who has had 1,186 runners, stands for a fee of NZ$100,000 (plus GST) at Waikato Stud.