Focus on quality the foundation of Khalid Abdullah’s breeding success 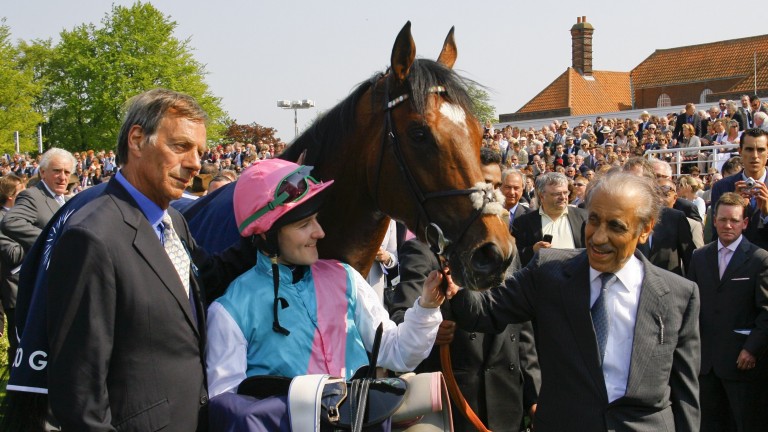 No expense was spared in achieving lofty ambitions for Juddmonte Farms

Khalid Abdullah’s Juddmonte Farms ranks as one of the world’s most prestigious and productive breeding operations. It has few peers, with only perhaps the Aga Khan Studs and Coolmore able to match its strength in depth and achievements.

The seeds of such spectacular success were sown in the 1970s when the young owner, a scion of the Saudi royal family but self-styled with typical humility as ‘Mr’ Khalid Abdullah rather than ‘Prince’, recruited former Newmarket trainer Humphrey Cottrill to act as his agent in order to realise lofty long-term ambitions in racing.

Cottrill bought Abdullah’s first four yearlings at Newmarket in 1977. None proved to be up to scratch on the track, but in the following year he and Jeremy Tree visited Keeneland and purchased a son of In Reality (Intentionally) for US$225,000. That colt, named Known Fact, took the Middle Park Stakes (Gr 1, 6f) and was promoted to first place in the English 2,000 Guineas (Gr 1, 1m) upon the disqualification of Nureyev (Northern Dancer) to become the first Arab-owned Classic winner in Britain.

Charming Native (Princely Native) had become the very first horse to carry the now instantly recognisable ‘green, pink sash and cap, white sleeves’ into a winner’s enclosure when successful at Windsor in 1979. A month later, Abeer (Dewan) landed the Queen Mary Stakes (Gr 2, 5f) to notch the first of many Royal Ascot – and Group race – victories for Abdullah.

Another notable first was provided by Fine Edge in 1982. The son of Sharpen Up (Blade), a future runner-up in the William Hill Sprint Championship (Gr 1, 5f) (now Nunthorpe), was the owner’s debut homebred winner. He hailed from a crop of foals produced by just nine broodmares, five of whom had been sourced from Gerald Leigh.

Abdullah was unstinting in his quest for the best when laying down the foundations of his racing and breeding empire, and during the late 1970s and early 1980s he made many big-money auction acquisitions and judicious private purchases of other breeders’ stock.

“All the credit must go to Prince Khalid, who was prepared to invest very substantial sums in the best bloodstock, wonderful farms and excellent staff,” trainer Guy Harwood once reflected in an interview. “He started with the best, and if the best was available, he’d buy it.”

Under the guidance of James Delahooke, stud and racing manager from 1979 until 1985, future Coronation Cup (Gr 1, 1m 4f) and Prix de l’Arc de Triomphe (Gr 1, 2400m) hero Rainbow Quest (Blushing Groom) was bought as a yearling at Fasig-Tipton for $950,000 in 1982, and the legendary Dancing Brave (Lyphard) was added to the team in the same location two years later for $200,000. The dams of both Rainbow Quest and Dancing Brave were eventually added to the Juddmonte broodmare band.

Another Kentucky yearling purchase of 1982 was the His Majesty (Ribot) filly out of Northern Dancer’s (Nearctic) half-sister Spring Adieu (Buckpasser) at $350,000, while mares were procured from the nurseries of Jock Whitney, Herbert Schnapka and Robert Sangster, with the odd filly in training purchased along the way, including Epsom Oaks (Gr 1, 1m 4f) runner-up Slightly Dangerous (Roberto).

The wisdom of those early acquisitions was borne out not only on the track, but also in the breeding shed. Mated with Known Fact, Slightly Dangerous produced the top-class miler Warning, while the same mare’s liaison with Dancing Brave produced Derby winner Commander In Chief.

Slightly Dangerous, a Roberto (Hail To Reason) half-sister to the dam of Rainbow Quest, was an exceptional broodmare for Juddmonte, also producing US Grade 1 heroine Yashmak ( Danzig), Derby runner-up Dushyantor (Sadler’s Wells) and Irish Derby (Gr 1, 1m 4f) second Deploy (Shirley Heights), who features as damsire of one of the pre-eminent sires of the age in Dubawi (Dubai Millennium).

Dancing Brave experienced modest success as a sire with his early runners and was later sold to stand in Japan, but his third-last crop conceived in Britain included Commander In Chief and another Classic winner for Juddmonte in Wemyss Bight.

Wemyss Bight’s sister Hope, also by Dancing Brave, distinguished herself as a most important mare for Juddmonte by producing Oasis Dream (Green Desert) – a champion two-year-old and sprinter who has developed into a blue-chip sire, supplying 17 Group/Grade 1 winners including the outstanding racemare Midday (Midsummer) – and the Poule d’Essai des Pouliches (Gr 1, 1600m) winner Zenda (Zamindar), who is the dam of the brilliant miler Kingman (Invincible Spirit), an exciting young sire who threw Abdullah’s blisteringly fast Coventry Stakes (Gr 2, 6f) winner Calyx from his first crop of two-year-olds.

The His Majesty filly out of Spring Adieu turned out to be Razyana, who failed to get her head in front in her racing days but produced as her first foal the 2,000 Guineas third and Haydock Sprint Cup (Gr 1, 6f) winner Danehill. The son of Danzig (Northern Dancer) played his part in a rare questionable call made by Juddmonte, as he was sold at the end of his racing career to Coolmore – for the admittedly not insignificant sum of £4 million, according to reports – before setting a record for number of Group/Grade 1 winners, with 84 top-level scorers sired in a stellar dual-hemisphere stallion career. Of course that decision did not preclude Juddmonte sending mares to Danehill, and they did so with remarkable results.

Success in the breeding shed continued to snowball, and Abdullah cemented his status as one of the world’s foremost owner-breeders in the 1990s through the aforementioned Quest For Fame, Commander In Chief, Wemyss Bight, Raintrap and Sunshack, as well as the likes of All At Sea (Riverman), Distant View (Mr. Prospector), Reams Of Verse (Nureyev) and Toulon (Top Ville).

By 1999 Abdullah completed a nap hand of Classics when Wince – a daughter of Selkirk (Sharpen Up) who would subsequently produce the Yorkshire Oaks (Gr 1, 1m 4f) winner Quiff (Sadler’s Wells) at stud – became his first 1,000 Guineas (Gr 1, 1m) winner.

But arguably the iconic Juddmonte horse of the decade was Zafonic, the scintillating two-year-old talent who stormed to a wide-margin victory in the 2,000 Guineas. By Gone West (Mr. Prospector) out of Zaizafon (Mofida) – one of the mares acquired from Sangster – he looked to have got one as good as himself in his first crop in the seven-length Dewhurst (Gr 1, 7f) winner Xaar, although the son disappointed at odds-on in the Newmarket Classic.

Zafonic died in a freak accident in a shuttle trip to Arrowfield Stud in Australia aged only 12, although Juddmonte and other breeders found compensation in the horse’s less talented and more inexpensively priced brother Zamindar, the source of homebred Group 1 winners Timepiece and Zenda and the Aga Khan’s phenomenal filly Zarkava.

As the Juddmonte broodmare band matured, with those high-class fillies and their relations retired to reproduce and the more lowly achievers weeded out, momentum behind the racing operation grew in the new millennium.

Hasili – a French Listed winner by Kahyasi (Ile De Bourbon) out of Kerali, a daughter of another purchase from Sangster, Cheveley Park Stakes (Gr 1, 6f) winner Sookera (Roberto) – gained immortality by producing five individual top-flight 1 winners, not including Dansili (Danehill), who was six-times Group/Grade 1 placed and atoned for that solecism by siring 21 elite winners as a member of the Juddmonte stallion ranks. Dansili and siblings Banks Hill, Cacique, Champs Elysees and Intercontinental were all by the discarded Danehill.

It was a similar foal sharing arrangement with Coolmore that gave Juddmonte access to Sadler’s Wells’ great son Galileo, from whom Abdullah bred his masterpiece, Frankel. The third dam of the unbeaten dual world champion, now admired as one of the world’s leading young stallions, was one of the mares purchased from Jock Whitney, Rockfest (Stage Door Johnny).

Frankel exemplified how quickly Juddmonte bloodlines have taken root and transmitted powerful tendrils. He is out of Kind, a daughter of Danehill, while Kind is out of Rainbow Lake, by Rainbow Quest.

Juddmonte-nurtured names proliferate in the pedigrees of other recent stars for the stud, too. Breeders’ Cup Mile (Gr 1, 1600m) winner Expert Eye is by outside stallion Acclamation (Royal Applause) but his first two dams are by the homebreds Dansili and Distant View; Calyx’s dam is a daughter of Observatory out of a mare by Quest For Fame.

The extraordinary Enable has fewer Juddmonte stallions in her genealogy but her damline is firmly anchored in the stud’s history, with her fourth dam Fleet Girl one of the few Schnapka broodmares still represented in the organisation’s stud book.

The highest tribute that can be paid to Abdullah’s triumph as an owner-breeder is that purchases of young stock have become rare, simply because they are so unnecessary; the home stallion squadron is second to none in strength in depth, containing as it does the proven Oasis Dream and exciting younger names Frankel and Kingman, while the broodmare herd is replete with high-achieving racemares, accomplished producers and relations to both.

The US branch of Juddmonte has gone to market in recent years, and found the champion and record North American-trained prize-money earner Arrogate (Unbridled’s Song), although Abdullah’s colt Tacitus – by Tapit out of homebred multiple Grade 1 winner Close Hatches (First Defence), whose granddam Silver Star is a Zafonic sister to Xaar – shows that the stateside breeding programme functions rather well too.

In its fifth decade of operation Juddmonte has defied repeated rumours of a wholesale dispersal although it has recently made rationalisations, streamlining the mare band to around 200 head and selling Abdullah’s first farm at Wargrave in Berkshire.

It is still very much business as usual for the operation though and the central tenet of that business, authored by Abdullah, has been a laser-like focus on quality: quality racecourse performers, quality bloodlines, quality land for youngstock and quality staff for providing management, advice and stockmanship.

From Dancing Brave and Rainbow Quest through Zafonic and Xaar to Frankel, Kingman and Enable, Juddmonte have proved that quality begets quality.