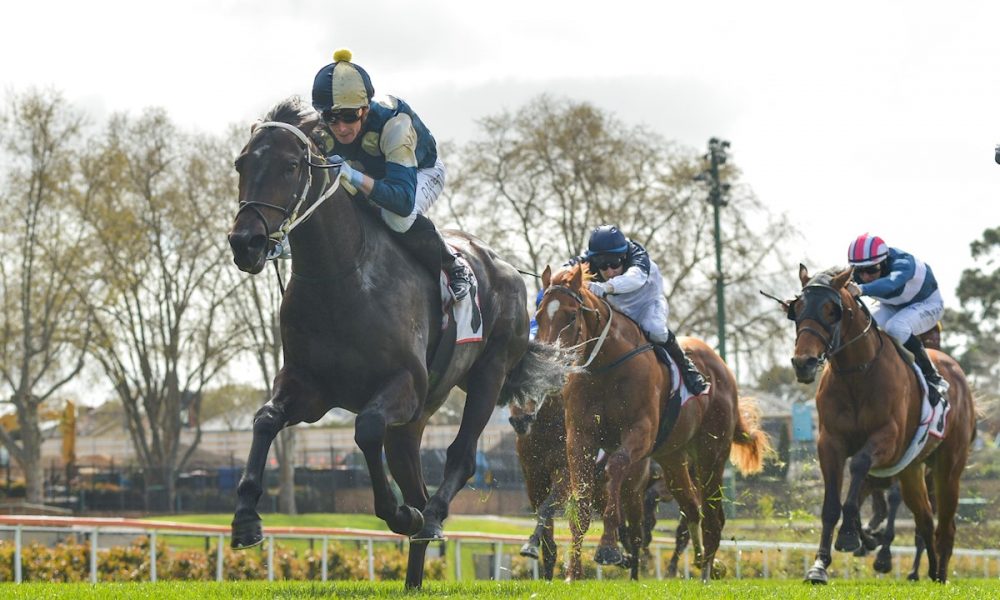 3 c Savabeel – Simply You by O’Reilly

Forgot You (Savabeel) emerged as a candidate for the Victoria Derby (Gr 1, 2500m) at Flemington at the end of next month when he broke through with a maiden win in the PFD Food Services Handicap (1500m) at Moonee Valley on Saturday.

The New Zealand-bred colt appreciated the step up to 1500 metres as he got off the mark at the fifth attempt, having raced over 1400 metres as a juvenile when eighth in both the Sires’ Produce (Gr 2, 1400m) and Schweppervescence (Gr 3, 1400m).

Forgot You had been pencilled in for a Cranbourne maiden two days prior to his win, but co-trainers Trent Busuttin and Natalie Young were rewarded for waiting to take the weekend option. The three-year-old went into his assignment second-up off a close third in a Benchmark 70 at Flemington a month earlier and benefited from a solid tempo.

Jockey Daniel Moor was already at work as the field took the turn but Forgot You kept on to beat the hat-trick-seeking Sandy Prince (Pride Of Dubai) by three-quarters of a length in a manner that suggested he could relish a stiffer test of stamina, although Young had expected to see her charge travel with more ease through the run.

“But he had amazing acceleration,” she said post-race. “We’ve got him nommed for the Guineas and the Derby so where we go from here, we’ll weigh it up. He could go to the Derby Trial, or we could bring him back and go for the Guineas Prelude, so we’ll just see what Daniel seems to think, but obviously he got the job done nicely today. He’s a really nice horse going forward.”

Busuttin Racing paid $330,000 to secure Forgot You at the 2020 Inglis Ready 2 Race Sale, having been offered by Jamie Beatson’s Ohukia Lodge operation. The youngster had been entered and withdrawn from the Waikato Stud draft at both the Inglis Easter Yearling Sale and the Karaka National Yearling Sale.

Forgot You is the second winner from three foals to race out of the 1100-metre winner Simply You (O’Reilly), a three-quarter sister to the stakes winners Escadaire and Bonny O’Reilly, as well as Group 2 winner Rare Insight, who herself is the dam of Coolmore Classic (Gr 1, 1500m)  winner Steps In Time (Danehill Dancer).

Simply You is a daughter of dual Group 1 winner Glamour Puss (Tale Of The Cat) and a half-sister to Doncaster Handicap (Gr 1, 1600m) and George Ryder Stakes (Gr 1, 1500m) winner Vision And Power (Carnegie).

Simply You missed in 2019 and her filly foal by Savabeel (Zabeel) died. She was covered by Super Seth (Dundeel) last spring.

New Zealand’s champion sire Savabeel stands at Waikato Stud at a fee of NZ$100,000 (Plus GST).