Four for Shinn as Hayes provides but challenges remain 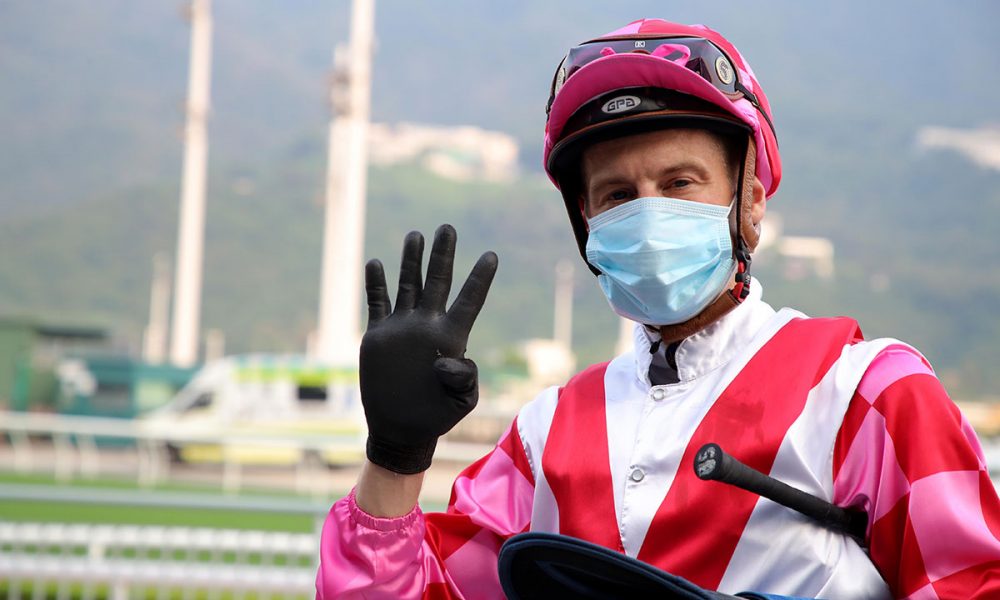 The afternoon after he rode his way to four wins at Sha Tin, Blake Shinn pondered the possible implications for the season ahead as he took time to allow his body to recover from the rigours of riding at the very base of what might be deemed – in the context of being a jockey, at least – a workable bodyweight.

Shinn’s four-timer on Sunday, aided by the burgeoning David Hayes stable, could prove to be a pivotal event in his Hong Kong experience, perhaps the springboard that will propel him to a secure position in the higher reaches of the premiership standings. But the Australian’s reflections on his quartet that had been two years of struggle in the making led him to a sage observation.

“Now we’re back to reality,” Shinn told Asia Bloodstock News. “I only have two rides this week, one on Wednesday and one on Sunday. The great thing is, being here for a couple of years, I’ve kind of got used to the rollercoaster that Hong Kong presents itself as.”

The Melbourne Cup- (Gr 1, 3200m) winning rider – he has a Golden Slipper (Gr 1, 1200m) among his haul too – has found it difficult to make his mark in Hong Kong since he arrived two years ago. The misguided assumption from some quarters back in Australia that Shinn would be a championship contender in his first season was deflated when he plugged on through an initial campaign that yielded only 15 wins; last season, he fought on to 24 wins and earned plaudits for a couple of feature race victories.

“I had 40-odd seconds in my first season as well and that was probably very detrimental, to be honest, because this place is all about winning,” he observed. “If a third of those had been winners, then the second season would have been completely different.”

A best finish of fourth from only four rides through the opening two fixtures of this season had suggested the grind would continue. But the third meeting brought a book of nine rides: in winning four of those he climbed into a top four berth, and left the track with his earnings swelled from $62,400 to $3,029,750.

“I knew those rides were coming, so I was just being patient and just thought that this was my day to hopefully hit the board,” he continued. “You’re just hoping for that breakthrough day that can set you up and you never actually know when it’s going to happen in Hong Kong.”

Shinn has been riding out for the powerhouse stable of John Size, as well as Hayes. Like Shinn, the latter endured a tough beginning – albeit to his second stint in Hong Kong – after relocating from Australia last year amid much fanfare, but a good start this time has him at the head of the premiership with six wins.

Hayes’ gallopers made up half of Shinn’s quartet – 23 per cent of his rides last term came from Hayes – with Shinn vying with the likes of Chad Schofield and Keith Yeung for the bits Zac Purton leaves behind, while doing the same with rides Joao Moreira does not take for Size.

“I’d say Blake’s on a path to ride a lot more winners than he has the last few years,” Hayes opined. “He’s very balanced, he’s got a great seat on a horse and he works hard.

“Zac rides a lot for me but you can only get him when you’ve got a horse with good form, the top two get a lot of opportunities simply because of their ability. Blake will do a lot of riding for me.”

That is a welcome situation for Shinn, given that the Hong Kong racing scene’s past is littered with successful jockeys who arrived with big hopes, failed to come to grips with the complexities of the ultra-competitive scene and left. A young Damian Lane, Willie Pike, Mark Zahra and any number of European and South African hoops found the going too tough to linger: Shinn could have been one of those.

“It’s a challenge to try and compete at the level (of Moreira and Purton) week-in, week-out because they set such a high benchmark, but I enjoy the challenge because I’m bettering myself every day, you’re learning something new every day and it’s part of evolving.

“A lot of people walk away from a challenge but, to be the best in the world, you’ve got to test yourself and I want to test myself against these guys and prove to myself and everyone that I can be good enough with the right chances. It’s challenging but it’s a great experience.”

That he is still in the mix and fighting to live out a boyhood dream is in part down to his determination and in part due to the unusual circumstances of the Covid-19 pandemic: in years past, with jockeys on the outside keen to get in, Shinn’s contract likely would not have been renewed after season one, but the headache of international movement and the HKJC’s difficulties in recruiting outside riders has meant little change to the jockey ranks during Shinn’s time in the city.

A welcome mat from their peers has never awaited any new jockey’s arrival for trackwork at Sha Tin, instead they might expect anything from guarded politeness to aggressive, mind-game needling. Shinn encountered both. And what came across as his aloof demeanour hampered his initial attempts to forge bonds with trainers and owners that are so essential to success in the absence of jockeys’ agents.

“I think I’m an introvert by nature and quite quiet, probably a bit of a recluse, to be honest, and that certainly can be a detriment to me, especially when people are a bit unsure about you until they get to know you on a bit more personal level,” he said.

“It was much harder than I anticipated: you’re living in a foreign country, a completely different culture, there are so many elements to Hong Kong racing to get your head around and I suppose the only people that can talk about that are the people that are here and have experienced it.

“It’s not just the riding you’ve got to get your head around, it’s the day-to-day life, the politics of the Hong Kong racing environment, and gaining acceptance is really tough. I hope there’ll be a bit more acceptance but, yeah, that’s been a really tough thing because you just turn up and have your head down day-in and day-out and you can feel isolated a lot of the time, especially if you’re not winning.”

Shinn’s weight is an obvious hindrance, too. The Hong Kong premiership has traditionally had a second, heavier-weighted expat rider ensconced in the top five, the likes of Darren Beadman, Nash Rawiller or Neil Callan, with Purton being the number one in the category.

The Hong Kong system allows a “plus two pounds” for riders who get down to 120 pounds or below, meaning a jockey whose minimum is 120 pounds can ride horses allotted 118 pounds in the handicap by putting up an allowable two pounds over-weight. That overweight allowance is removed at 121 pounds and up, therefore limiting a jockey’s opportunities. Shinn will not go below 121 pounds.

“If I could ride at 120 it would open up so many more doors but I have to look after myself, that’s my number one priority, to look after my body. It is what it is and I’ve just got to accept it and do the best with what I’m getting,” he said.

“I’ve got a great dietician/nutritionist back in Australia that I constantly liaise with and the Club provides Dr John O’Reilly who is there for all of us jockeys, which is fantastic, so I’m doing everything I can.”

The mental wellbeing of athletes has been to the fore in recent times and Moreira highlighted the HKJC’s failings on that front in this publication recently. Prior to his time in Hong Kong, Shinn went on record to detail his own struggle. Nowadays, he said, he seeks positivity.

“I suppose as an athlete it’s about trying to stay in a positive and clear frame of mind. I like looking at all the great sportsmen, reading what they’ve said, their stories, and that drives me to get where I want to go. You’re always trying to have good people around you and I’m very lucky that I’ve got a lot of positive people around me in my life that I feed off for that energy,” he said.

Shinn left Australia at a time when he was on a roll after returning from a serious neck injury. He said he took the punt on relocating so as to test himself, to ride against his “idol” Moreira and perform on the circuit he had watched with awe as a child. It may be that his career gamble, which brings the near-constant drain of riding at his lightest, often in sapping humidity, is now starting to pay out.

“All us jockeys need, sometimes, is someone to throw us a good chance and believe in us,” he added.