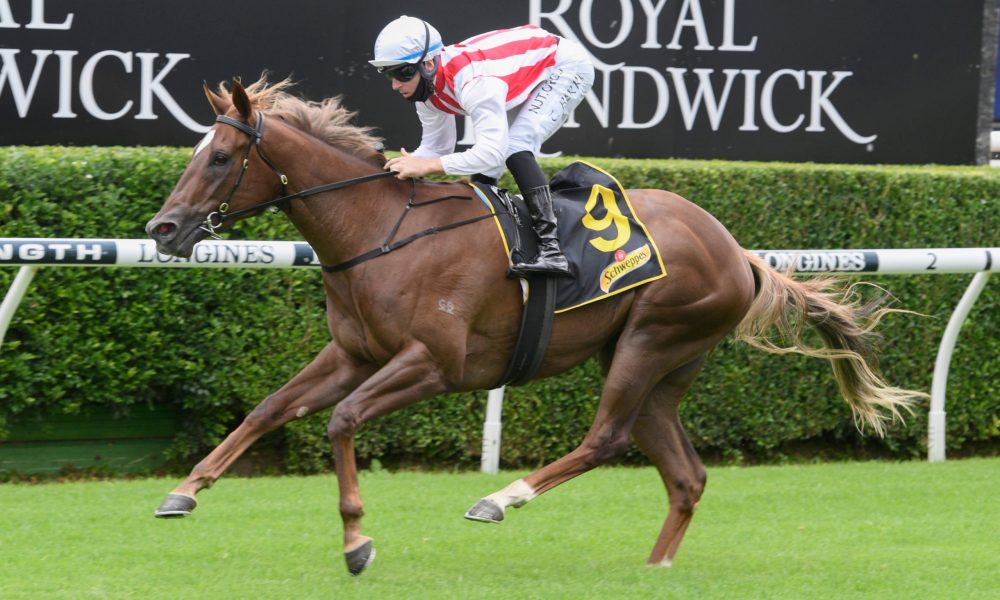 The win of Four Moves Ahead (Snitzel) on Randwick’s Kensington track turned plenty of heads, with the two-year-old already on the third line of betting for the Golden Slipper Stakes (Gr 1, 1200m) at $15.

Raced by Jonathan Munz’s Pinecliff Racing and bred by Munz’s G S A Bloodstock, she was sent out a drifting $2.70 favourite in Saturday’s 1150-metre handicap, with money coming for Godolphin filly Laurelin (Lonhro), a sister to Kementari.

However, the John Sargent-trained Four Moves Ahead quite simply dominated under Tommy Berry, racing handy before striding right away to score by two and three-quarter lengths over Ruby Kisses (Flying Artie) with a further half-length to Morioka (Maurice) in third.

“She’s been a lovely filly from day one. It was good to get one away today and it showed she has potential,” said Sargent.

“I was hoping to get some cover but it did not work out. But she got a clear run and a good turn of foot. But the best thing she has is her attitude, she is a really laid-back filly, she just eats and sleeps and she’s probably the perfect racehorse.

“I know it was wet today and the breed like it and so did her half-sister (Emeralds), but on top of the ground she will not mind that either.

“She is going the right way now, we will give her a few easy weeks and we will look at the Widden Stakes in about a month’s time,” he said.

According to prominent form analyst Daniel O’Sullivan, Four Moves Ahead produced the fifth-best rating among the two-year-olds seen so far – significant given ten of the last 11 Golden Slipper winners had already made their first appearance before Christmas.

It figures, then, that a bright future awaits Four Moves Ahead, who remained in Munz’s ownership after she was passed in at last year’s Magic Millions Gold Coast Yearling Sale.

Four Moves Ahead is the second named foal out of unraced American-bred mare Doulmera. Bred by the Aga Khan, she was sold to Badgers Bloodstock for €180,000 (approx. AUD$285,000) at the 2014 Arqana December Breeding Stock Sale and arrived in Australia a month later.

Served by Widden Stud’s Sebring (More Than Ready) in her first season down under, the resulting foal was Emeralds, winner of the Angst Stakes (Gr 3, 1600m) this season. Like Four Moves Ahead, Emeralds was also passed in, not reaching her $150,000 reserve at the 2018 Inglis Australian Easter Yearling Sale.

Doulmera produced a Pierro (Lonhro) colt in 2019, slipped to Dundeel (High Chaparral) that year and then was served by Snitzel (Redoute’s Choice) in November.