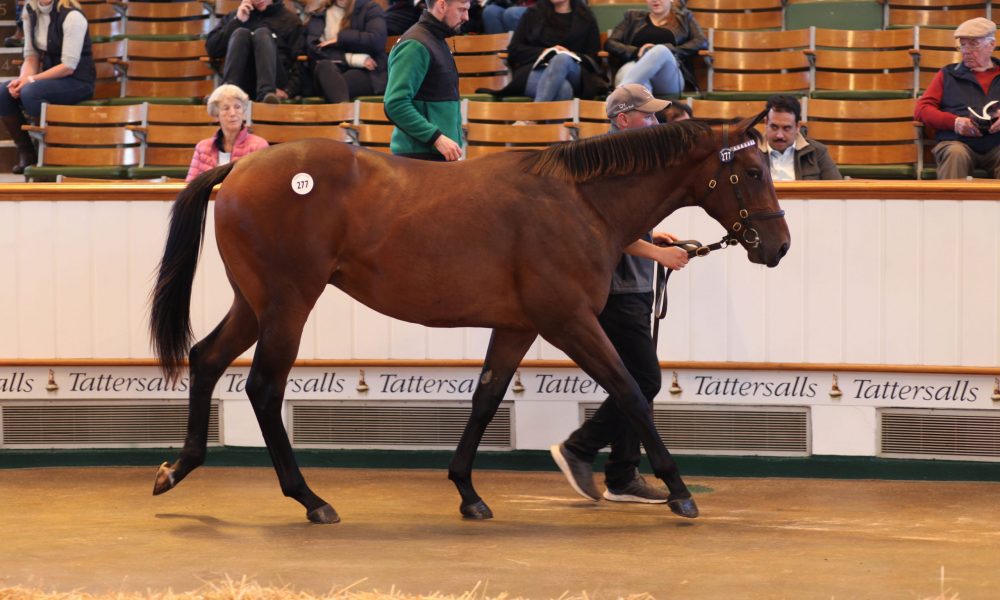 Frankel’s (Galileo) burgeoning appeal Down Under has translated into sales ring demand from southern hemisphere buyers at Book 1 of the Tattersalls October Yearling Sale, as the champion racehorse and champion European sire elect saw a second son destined for Australia in as many days.

Jeremy Brummitt and Danny O’Brien went to 160,000 guineas (approx. AU$300,000) to secure the colt yesterday, who is out of juvenile Group 3 winner Sea Of Grace (Born To Sea), with that purchase adding to Mick Price and Michael Kent Jnr’s outlay of 110,000 guineas (approx. AU$205,000) on a colt by the Juddmonte Stud-based sire early in Tuesday’s opening session.

The last year has not only represented a landmark success for Frankel in his native northern hemisphere, in a season which will see the stallion wrest champion sire accolade from his imperious sire Galileo (Sadler’s Wells), with five Group 1 winners, including Derby (Gr 1, 1m 4f) victor Adayar.

Brummitt and O’Brien have sourced notable success from the Tattersalls yearling sales in the past. The trainer famously produced Tattersalls graduate Russian Camelot (Camelot) to become the first northern hemisphere-bred colt to win a derby after victory in the South Australian edition in 2019, adding the Underwood Stakes (Gr 1, 1800m) a year later.

This colt, catalogued as Lot 258, is the second foal from Group 3-winning two-year-old Sea Of Grace, who also placed second in the Poule d’Essai des Pouliches (French 1,000 Guineas) (Gr 1, 1600m) during her three-year-old year career, in which she won the Dick Hern Stakes (Listed, 1m) by four and a half lengths.

Furthermore, being out of a mare by Born To Sea (Invincible Spirit), she is bred 3×3 to blue hen Urban Sea (Miswaki), the dam of four Group 1 winners, including Galileo and Sea The Stars (Cape Cross).

Mick Price has no doubt a son of Frankel (Galileo) will make it big time in Australia and when he believes, when the time comes, the colt’s owners will be able to cash in as studs clamour to buy him for stallion duties.

The forthright Melbourne trainer was active at the opening session of the Tattersalls October Book 1 Yearling Sale on Tuesday, purchasing a colt by the star Juddmonte Stud stallion for 110,000 guineas (approx. AU$205,000).

Catalogued as Lot 6 and offered by Highclere Stud, the colt is out of Exceed And Excel (Danehill) mare Eminently and was signed for on behalf of Price and his training partner Mick Kent Jnr by agent Dermot Farrington.

The winner, Get In The Spirit (Spirit Of Boom), is trained by Price and Kent Jnr.

“We felt that there was a brilliant opportunity to secure a quality colt at value because it was a foal share and foal shares often walking through the ring are relatively unprotected, so the price was certainly not indicative of what we thought of that colt,” Price told ANZ Bloodstock News yesterday of his Frankel colt.

“It makes me feel pretty good that we bought one from Juddmonte. I watched Moody’s horse go down the straight as a baby the other day (Rampant Lion) and I thought he was an impressive colt and there is no doubt that Frankel in this country will get a topline colt who will be worth a fortune.

Farrington has compiled a shortlist of yearlings deemed suitable for Australian conditions from the Tattersalls catalogue and that list has been heavily scrutinised by Price. He was, however, immediately taken with the Frankel colt who is a half-brother to European juvenile winner Luxor (Oasis Dream).

“Frankel is the modern day Danehill. What other stallion gets close to 18 per cent of stakes winners (to runners)? I think a Frankel colt in this country is worth the risk and if you do strike it, it is going to be gold,” Price said.

“All the photos and videos get put in front of me with their pedigrees. Dermot gives me a short list and I say ‘yay or nay’, then we vet them, then we bid. Dermot is our eyes over there, so he is key.

“Mind you, if I don’t like them and I think they are too European for Australian conditions, I don’t buy them (regardless of what Dermot thinks).”

And too European is?

“My personal dislike is the European types which are light-boned, have small feet and are lightly framed,” he said.

“It might work over there, but I don’t like looking at that type of horse every morning. I can just tell you what works in an Australian stable properly and what doesn’t work and I don’t want to be looking at a light-boned, small feet, lightly framed, narrow headed type of horse.”

The European-bred yearlings purchased by Price and Kent Jnr will be sent to Australia almost immediately where they will be broken in, unlike the US-bred yearlings they have purchased in recent years including a War Front (Danzig) filly at the recent Keeneland September Yearling Sale in Kentucky.

The US-bred yearlings are broken-in in the US before coming to Australia to be trained. One of the trainers early US forays netted four-year-old gelding French War (Declaration Of War), a first-start winner at Benalla on September 26.

“French War is one of our American Declaration Of Wars we’ve got. We bought some nice distance types of American horses and so far we are very happy with them,” he said.

“They are obviously six months behind everything else and they are only babies, but what it does do, I think, is it reminds me about (the importance of) recruiting properly.

“It gives our buyers and our clients a different way of buying a horse and I think we’re tapping into some amazing bloodlines and some amazing heritage with Juddmonte (through the Frankel colt).

“Ninety-nine per cent of the horses I buy I spec and this one was no different, but as we speak, he has already been taken up by stable clients. People recognise value.”

Tuesday’s opening session saw strong figures, without providing a headline horse to break seven figures, but a 27 per cent increase in the median price to 152,500 guineas (approx. AU$293,000) indicated vibrant trade on the sales floor.

A Frankel colt also held position as the sale’s top lot for a period of time yesterday, as the MV Magnier-purchased Lot 227 fetched 925,000 guineas (approx. AU$1,730,420), however that was bettered by the flagship sale’s first million guineas yearling of 2021, as a colt by Sea The Stars (Cape Cross) realised 1.2 million (approx. AU$2,244,870) guineas later in the session.

Catalogued as Lot 277 and offered by Watership Down, the colt is the second foal out of Group 1 winner So Mi Dar (Dubawi), a sister to Darley shuttler Too Darn Hot and two other stakes winners, herself being a daughter of Group 1 winner Da Re Mi (Singspiel).

Buyer Charlie Gordon-Watson, who signed for the colt on behalf of Bill Farish’s Woodford Racing in the US, revealed it was a last-minute decision to purchase him.

“Bill Farish rang me just an hour ago and said, ‘What about this horse? What do you think?’ I told him that I thought he was the best horse I have seen at the sale.

“I know the family backwards, as Bill does, and he is a great friend of Simon’s (Marsh, general manager Watership Down Stud) but he did not want Simon to know anything about it, Simon had no idea.”

Gordon-Watson added: “It all happened in the last hour and a half. I think I got the valuation right as I told Bill that I thought he’d make between 800,000gns and 1.2 million.

“I have been involved in the family all the way through, I bought (third dam) Darara and this colt is very typical of the family, perhaps a bit bigger because they are all slightly smallish, Darara was quite small. He is a very athletic horse, I have been going on about Lot 277 for a long time.”