Fung off to fast start 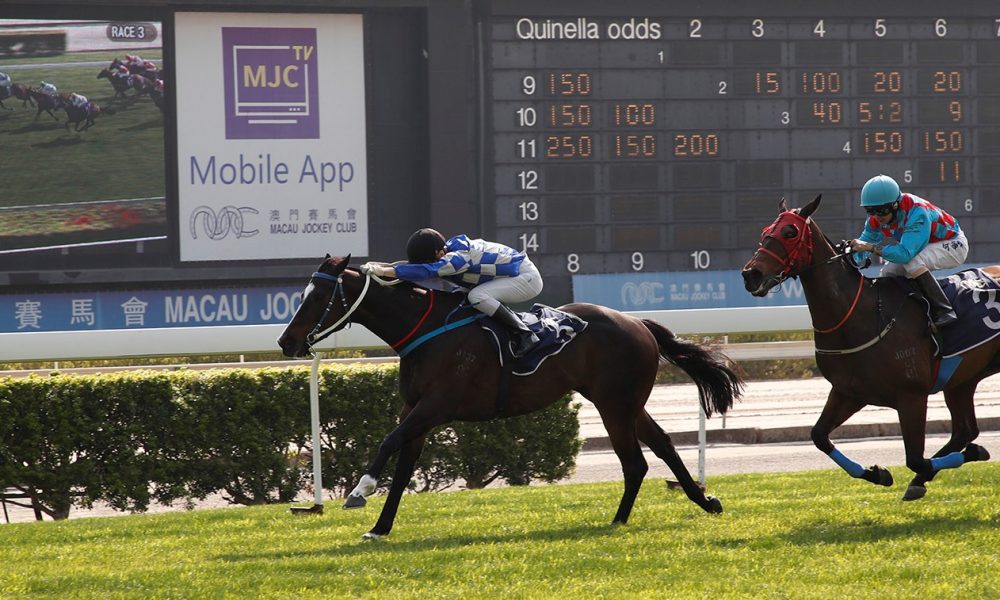 Tony Fung got his year off to a flying start by picking up Saturday’s feature, the Good Fortune Handicap (1500m), with six-year-old turf champion Lover Paradise (Canford Cliffs), and The Good Year Handicap (1350m) with his latest sand star Hostwin Aurora (Red Element).

On Macau Jockey Club’s first raceday for the Chinese New Year, Fung saddled up both Lover Paradise and Kelowna Star (Sufficient) in the Class 1 Good Fortune Handicap, his first runners for the year.

Lover Paradise was handled to perfection by Japanese rider Massa Tanaka, who gave Fung the perfect start with a brilliant win, while nine-year-old Kelowna Star ran on strongly
under Luis Corrales for fourth place.

Lover Paradise, who has often had a tendency to over-race in the 1500-metre contests, settled nicely under Tanaka and was always traveling kindly on the back of the leader Oneofthegreats (Snitzel). Once in the straight, Tanaka raced clear and had plenty in hand to hold off favourite Pearl Green (Fastnet Rock), with Top Mountainlegend (Manhattan Rain) in third.

The victory was the first leg of a double for Massa Tanaka, who won the next event, the
Happiness Handicap (1500m), on Money Link (Red Jazz) for trainer Stanley Chin.

Hostwin Aurora, meanwhile, is emerging as Tony Fung’s latest sand star, after he destroyed his
opposition in the 1350-metre Class 3 over under Luis Corrales, winning by an eased-down four lengths.

An Australian import who raced there under the same name, Hostwin Aurora was well beaten in his three runs at Doomben, the Gold Coast and Kembla, but the four-year-old appears to have found his niche on the Macau sand, with two wins and two seconds from his five starts on the surface.

Geoff Allendorf was another who cheered in the Year Of The Ox with a double for the
afternoon.

Allendorf won the opener, The Prosperity Handicap Division One (1500m), with Turquoise Success (All Too Hard), who was given a lovely front-running ride by Shogo Nakano.

Turquoise Success had been a beaten favourite on numerous occasions in his 12 runs prior to
Saturday, all over the sprint distances of 1200 metres on the turf and 1050 metres on the
sand. In a bold move, Allendorf stepped the four-year-old up to 1500 metres and he reaped the rewards.

“I’ve been wanting to run him at 1500 for a while, but each time I put him in he got balloted
out. I’ve always thought it would suit him with his breeding,” said Allendorf. “He works like a Class 3 horse in the morning and I’m surprised he has not won a race until today.

“I was a little concerned that he might go a bit hard, that’s what he has been doing in the
1200-metre races, so I put Shogo (Nakano) on him; no one here rides a front runner better
than he does. He just gets them to relax so well; we’ve seen it time and time again.

“The horse shows so much potential in his work, so I’m hoping he can relax in these middle-distance races and go on from here.”

Turquoise Success recorded 1.28.6s for the 1500 metres, which was two seconds
faster than the Second Division taken out by Luen On Success (Lord Kanaloa), also prepared by Allendorf. It was win number three in Macau for Luen On Success and also provided
the first leg of a treble for jockey Luis Corrales.

“It’s a great start to the year for not only myself but for my owners Mr Tang, who owns
Turquoise Success and also has a half share in Luen On Success with Mr Thomas Lau,” said Corrales. “They have both been good supporters of the stable.

“I definitely think Luen On Success can also go on to better things. His runs since we gelded
him have been an improvement, and Luis (Corrales) gave him a lovely ride. The time wasn’t
flash but he won with a bit in hand.”

Luis Corrales was the star of the afternoon, booting home three winners to take him three clear in the riders’ standings on 25 victories, with Eric Cheung second on 22 winners and Peter Ho third on 21.

As well as Luen On Success and Hostwin Aurora, Corrales was successful on the Alan Tam-trained Premier Choice (Hidden Dragon) in the Lai See handicap (1050m).

It was win number seven for Premier Choice, all of which have come on the all-weather
surface.