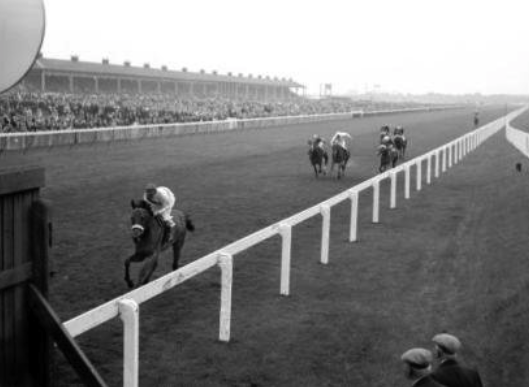 Garnet “Garnie” Bougoure (3 March 1923 – 22 November 2008) is a glaring omission from Australian racing’s Hall of Fame. Even more surprising is that he is yet to be inducted, alongside his brother-in-law George Moore, into his home state Queensland’s Hall of Fame.

Indeed, there is an argument his extended family should have a place in the latter – with his cousin Doug Bougoure having trained the internationally successful 1983 Cox Plate winner Strawberry Road and Doug’s son Dan preparing Falvelon to win the second and third editions of Hong Kong’s International Sprint in 2000 and 2001.

Garnet Bougoure rode eight Classic winners in England and Ireland and won 14 races, in those countries, which now have Group 1 status and therefore is certainly not excluded from our list of “Incomparables” (the Australian jockeys who had sustained and remarkable success in England, Ireland and France from the 1900s to 1970s).

Bougoure, like many of his compatriots, was lured to the UK, Ireland and Europe via Singapore, Malaya and India by the grand lifestyle and opportunity to earn considerably more than he could in Australia at that time.

He left Australia in the early 1950s – a decision you’d imagine was probably also influenced by the success of Australian jockeys Rae “Togo” Johnsone, Edgar Britt, Arthur “Scobie” Breasley and Bernard “Brownie” Carslake (another notable HOF omission) through the 1930s and 1940s.

His Australian resume was not as impressive as theirs – his best wins being the 1949 Australian Cup on New Cashmere and the 1950 William Reid Stakes on Filipino, both for Flemington trainer Phil Burke – but Australian jockeys were incredibly popular overseas and he comfortably joined their ranks.

In October 1951 it was reported that he would leave for India next month after receiving an offer from the Maharajah of Ramrad. He also rode, with limited success, in France in 1952 but returned to Australia in December to resume duties as number one jockey for the Flemington trainer Phil Burke.

He’d been retained by prominent French owner Monsieur Strassburger who released Bougoure from his contract towards the end of the season. He’d ridden either 14 or 25 winners (sources vary) in France with one newspaper noting he’d “a lot of bad luck lately and fallen three times”. Earlier in the season, the press had reported that “Bougoure has greatly impressed race experts although none of his wins have been important races”.

It was in June, that year, that newspapers reported that “Mrs. Margaret Bougoure, wife of the Australian jockey Garnet Bougoure, will fly to Paris to warn her husband not to associate with an Englishman who had attached himself to the jockey. The man concerned is the same man against whom Truth warned Australian jockeys planning overseas trips.”

In 1954, he again rode in France before moving to ride in Singapore and Malaya where he often returned and scored many feature race wins including the 1954 and 1958 Sultan Gold Vase, the 1955 Singapore Gold Cup, the 1958 Perak Derby. He would later win the Singapore Derby in 1968 and 1969 and then train numerous feature race winners on the circuit including the 1978 Lion City Cup with Gentle Jim who was, notably, ridden by Lester Piggott.

Late in 1954 it was reported that Bougoure had ridden 44 winners in Malaya, for the season, and was “only six wins” behind fellow Australian Athol Mulley in the jockeys’ premiership.

Bougoure returned to race in Europe in the late 1950s and his association with illustrious Irish trainers Vincent O’Brien and Paddy Prendergast led to many celebrated successes with the latter training five of his Classic winners and O’Brien two.

He had an instant impact in Ireland. In July 1959, the following was reported: “Garnet Bougoure, who rode a double at Leopardstown, has now won on eight out of his last eleven mounts, while Vincent O’Brien has saddled eight winners out of the last nine races in which he has had runners.”

He was champion jockey of Ireland in 1960 and while it’s been widely reported that he was the first Australian to do so but I believe that distinction may sit with Jack Thompson ten years earlier. Pat Glennon claimed the title in 1962.

Early on, his major success was confined to England but that changed. Don Cox, in the Daily Herald in June 1962, wrote: “Garnet Bougoure has played second fiddle to the other Australians riding in Europe, but in winning the Ribblesdale Stakes on Tender Annie, he showed he can more than hold his own.”

And Bougoure’s success in 1963 certainly assisted Prendergast becoming the first Irish-based trainer to ever win the British trainers’ title.

Two years earlier, Bougoure was denied 1,000 Guineas success by his compatriot Bill Williamson who won on Abermaid from Bougoure’s mount Display. It was Williamson’s first Classic success abroad and the race caused quite a stir as was reported at the time: –

“Australian jockeys jockeys Bill Williamson and Garnet Bougoure had to wait twenty minutes at Newmarket yesterday to learn which of them had ridden the winner of the 1000 Guineas. Williamson was first…. but the stewards objected to the winner for interference before overruling the objection after studying a film of the race.

“Many critics thought that Bougoure should have won on Display. They argued that he did not make up his mind whether he was going to ride a waiting race or not.”

Noblesse (Mossborough) and Ragusa (Ribot) were both foaled in Ireland in 1960 and trained by Prendergast and Bougoure was blessed to be in the right place at the right time.

Noblesse won the Oaks by ten lengths after having won the Musidora Stakes by six lengths – a race, incidentally, which Prendergast and Bougoure would combine to win again in each of the next two years.

“Noblesse was the easiest winner of the Oaks that I have ever seen,” wrote Julian Wilson in “The Great Racehorses”.

Noblesse was made ante-post favourite for the King George and Queen Elizabeth Stakes….but she injured a hock and was withdrawn. Instead, Prendergast ran his vastly improved Irish Derby winner Ragusa (with Bougoure aboard) who won comfortably.

‘Garnie’ Bougoure was certainly among the very best of the Australian jockeys who plied their trade internationally during the 1950s 1960s and what an era it was as the following report, from July 1966, illustrates:

“Australian jockey Garnet Bougoure had two wins at Goodwood yesterday. However, fellow Australians Scobie Breasley, Ron Hutchinson, Russ Maddock, Des Lake and Bill Williamson could raise only two second places and a third between them. Bougoure took the Craven Stakes, over a mile, three furlongs and 200 yards, on Fair Proportion.”

Bougoure eventually returned to Singapore where he rode until 1969 and then trained until 1995 before he retired and returned to live close to his family in Melbourne. He died in 2008.