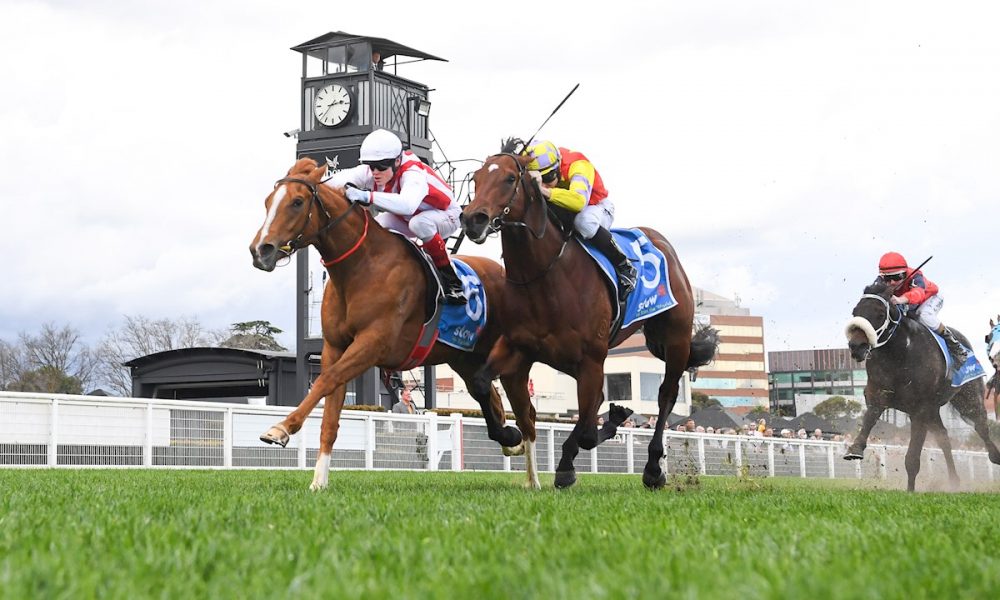 A bit like 1980s ad man Victor Kiam, the literally smooth American who so loved his electric razor he bought the company, Jonathan Munz liked his mare Rekindled Applause so much he also acquired the source – her mum.

The idea was to send the mares to one of the hottest young stallions around – Redoute’s Choice (Danehill) – with the Rasmussen-esque twist of in-breeding him to a strong female ancestor. This would be 1950s American mare Stolen Hour (Mr. Busher), dam of the great broodmare Best In Show (Traffic Judge).

Then his one-year-younger full brother, Rekindled Alliance, placed thrice at G2 and once on the rung below. A third full sibling, Rekindled Glory, was Sydney-placed among her only three runs.

The Rekindled Affair story ended there, the mare meeting an early demise at 14 in 2009, but it also had earlier, enthralling chapters elsewhere. She’d left six named foals back home. The first was a 2000 drop called Where We Left Off (Dr Devious), who won seven races in the US including a Group 3 at Monmouth and a Listed at Suffolk Downs in 2004. Rekindled Interest’s deeds several years later would give Rekindled Affair the rare distinction – richer considering her relatively short life – of throwing stakes winners in both hemispheres.

For the daughter who blazed the family trail to Australia, Rekindled Applause – who was almost another northern hemisphere stakes-winner for her dam, being Listed-placed four times while winning four of 19 in Italy – the going here was tougher. Her first three named foals – all fillies – gained one win between them: Popular Acclaim (Exceed And Excel) at Echuca.

Whilst in-foal with her, Rekindled Applause was put into the Inglis Easter Broodmare Sale of 2009. She was passed in, fortunately for Munz and GSA.

Perhaps spurred by the mating of her mother to Redoute’s Choice, which had produced Rekindled Interest to win on debut at Bendigo in early 2010, Rekindled Applause was deployed to a run of five straight covers by the great son of Danehill, which brought a lift in fortunes.

Rekindled Power won at Bendigo only but was Group 2 placed in the Arrowfield [now Vinery Stud] Stakes (Gr 2, 2000m) of 2015 at Randwick. Rekindled Effort won one race at Pakenham then five more in Hong Kong, as Victory Machine. Rekindled Force – his dam’s sales-topper as a $320,000 yearling buy for Astute Bloodstock – won at Newcastle and Muswellbrook. Then the fifth one, Shuffle Up, a $150,000 purchase for Richard Freedman, was a city winner of three races who was a neck second to Ringerdingding (Sebring) in Randwick’s Carbine Club Stakes (Gr 3, 1600m) of 2019.

Other events would better display the class of this female line, particularly when paired with Redoute’s Choice. Rekindled Applause’s first foal, Lago Ovation (Encosta De Lago), had just one (poor) run in the bush. But at stud, her third mating with Redoute’s Choice hit a jackpot in the form of Alabama Express, winner of the 2020 Orr Stakes (Gr 1, 1400m) at Caulfield.

But now, finally, 16 years after arriving in Australia, and having been retired from breeding aged 20 last spring, Rekindled Applause has a stakes-winner of her own, and an exciting one at that: Giga Kick (Scissor Kick), who made it three from three by taking the Vain Stakes (Gr 3, 1100m) at Caulfield on Saturday. And what delicious symmetry has gone into his making. Like Giga Kick, Scissor Kick was bred by GSA, after Munz acquired his dam, Back Pass (Quest For Fame) from Britain in 2002 via Rob Roulston – the same bloodstock agent who arranged the purchase of the Rekindled dam and daughter duo.

“All three mares were bought for Jonathan Munz and GSA because it was thought they’d go well with Redoute’s Choice,” Roulston told It’s In The Blood. “So they’ve generally been mated with that line, but now it’s amazing how he combines the two separate bloodlines and comes up with a star in Giga Kick.”

The Juddmonte-bred Back Pass, who won once at Lingfield, was bought mostly because she was a decent mare and not overly large, Roulston says. And she went well at stud here, through nine named foals. Five were by Redoute’s, with the first being Listed-winner Sharkbite, and the fourth being Scissor Kick. He won a Listed and a Group 3 at Randwick – the Rosebud (Listed, 1100m) and the Up and Coming Stakes (Gr 3, 1300m)  at starts three and four, before a neck second in Hallowed Crown’s 2014 Golden Rose (Gr 1, 1400m).

He’d win another Group 3 in Rosehill’s Eskimo Prince Stakes (Gr 3, 1200m) before retiring to stud in 2016, where, to be fair, he’s done precious little. After four seasons of shuttling between Arrowfield Stud – long-time GSA associates – and France, he’s been left in that country since 2019, where he stands for 5,000 euros (approx. AU$7,320) and is one of only two Australian stallions there, the other being Elvstroem, who’s stud fortunes are reflected in a service fee of 2,000 euros (approx. AU$2,930) .

Scissor Kick has had 69 winners from 143 runners – including 49 from 94 in Australia, and 17 from 37 in France. Giga Kick is his second stakes winner, after Dzsenifer, who won a Gold Coast Listed, also this year.

But a little like Epaulette – who’s had a sea-change to Turkey, only to hear the kids back home, like Blue Diamond (Gr 1, 1200m) winner Daumier, have begun to do well – Scissor Kick might have left behind a pearl in Giga Kick.

He may have had considerable help in the melding of pedigrees that came from his covering Rekindled Applause, giving Giga Kick a 7Sx7Dx6D cross to Stolen Hour, importantly through two different daughters of hers.

She comes through Scissor Kick as Redoute’s Choice’s fifth dam, through Best In Show. And she’s doubled-up through Rekindled Applause – via Best In Show in Royal Applause’s sireline, and through Stolen Date (Sadair), more powerfully straight along the bottom line as Giga Kick’s sixth dam.

“It’s sort of a Ramussen factor, though a long way back,” Roulston says. “And we’re talking about two different branches of the same (Stolen Hour) family.

“Now Jonathan has combined the Back Pass line with those mares and it has produced a good one, which is great.”

Giga Kick was entered for the Scone yearling sale last year but, echoing his dam’s passed-in effort of 2009, he was withdrawn late on the advice of GSA bloodstock manager Dean Hawthorne. It was a possible masterstroke for Pinecliff Racing, who’ve had a string of stars including Anthony Freedman-trained pair Shoals (Fastnet Rock) and Super Seth (Dundeel), and now another unbeaten potential star in the Grahame Begg-prepared mare Passive Aggressive (Fastnet Rock).

“Dean saw him and said he liked what he’d seen, spoke to Jonathan and it was decided we’d keep him,” says Rod “Rocket” Douglas, who’s Munz’s racing manager, but also trained a little in the past, including Rekindled Interest at the start of his career.

The other key move was to withdraw a couple of other things. With a few entire members of the family having had soundness issues connected with their ample size, Giga Kick went for the snip.

“We gelded him as a young horse so he wouldn’t get too heavy,” says Douglas. “We felt he probably wouldn’t have much stallion appeal anyway, being by Scissor Kick, who’d been a failure at stud.”

The identity of the sire also contributed to Douglas’s role in selecting a trainer, his nephew Clayton Douglas, who began training in 2020.

“I said to Jonathan that not many of our other trainers, like the Freedmans or Begg, would want a Scissor Kick, so why not give him to my nephew and if he’s any good, we might get to trade him,” Rod Douglas says.

The trade calls have of course come in, mostly from Hong Kong and plenty since Saturday, but Giga Kick is definitely not for sale, no doubt much to Clayton Douglas’s relief.

With 44 horses on his books, the Mornington-based conditioner is making a strong fist of things, with eight winners from his past 21 starters, and it looks like he’s happened on a good one in Giga Kick, who, Rod Douglas says, will next start in the Danehill Stakes (Gr 2, 1200m) at Flemington on October 1, with an eye to the Coolmore (Gr 1, 1200m) on Derby Day.

Rekindled Applause also has on the ground Giga Kick’s full older sister Miss Gaga, who’s had one unplaced run at Murray Bridge, and a yearling colt by another son of Redoute’s Choice, Pariah.