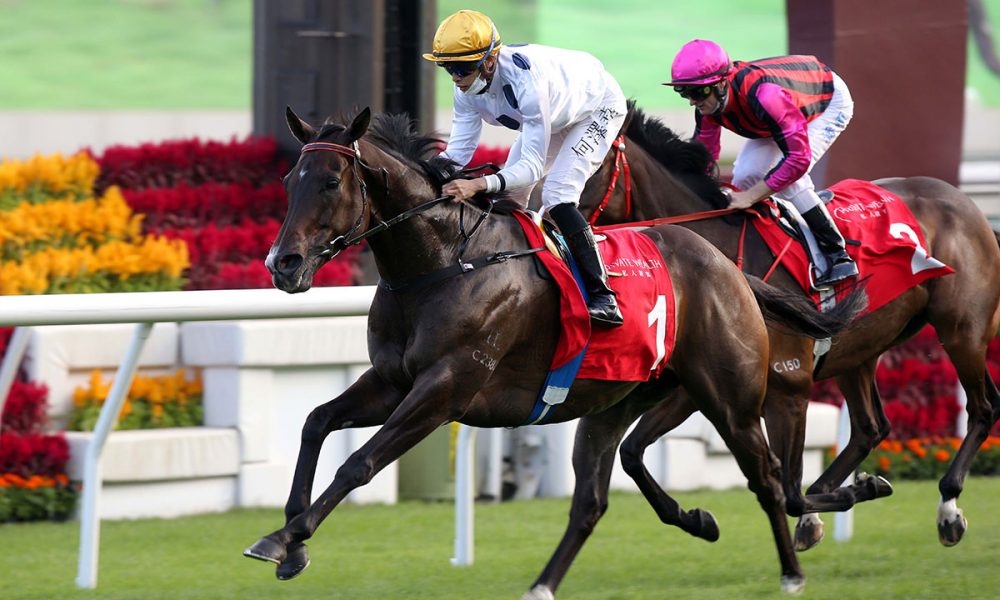 Golden Sixty’s (Medaglia D’Oro) latest demolition of the best milers Hong Kong can scrape together has left the gelding’s trainer Francis Lui hoping that a serious challenger will enter the Hong Kong Jockey Club’s ‘racing bubble’ to take on his stable’s champion when he bids for a second Hong Kong Mile (Gr 1, 1600m) victory at Sha Tin in two and a half weeks’ time.

The six-year-old – victorious in 18 of his 19 races – is one of a handful of contenders holding a solid claim to be hailed this year’s ‘world’s best’ miler, a group that includes the likes of Europe’s unbeaten three-year-old Baaeed (Sea The Stars) and Japan’s standout mare Gran Alegria (Deep Impact). Gran Alegria holds a Hong Kong Mile entry but was retired after winning her second Mile Championship (Gr 1, 1600m) at Hanshin on Sunday.

The International Federation of Horseracing Authorities’ (IFHA) rankings – one way of attempting to measure merit – at its latest November 7 ratings staging post, had the British four-year-old Palace Pier (Kingman) ranked the world’s ‘best’ miler at 124, with his Ascot conqueror Baaeed rated 123, with Gran Alegria at a miserly 121 and Golden Sixty on 120.

“I can’t say he’s the best in the world,” Lui told Asia Bloodstock News. “He looks like he could be but sometimes you need to compete against those other outstanding horses and then you can see the difference.”

With real deal champions from Europe rarely making the trek to Hong Kong at the year’s back end, Lui is hoping for a solid tie-in to the Japanese form to give his charge a further kudos boost and an international ratings hike, assuming he can win with daylight back to any well-rated invader in the placings. The trainer could yet get his wish, with running plans for Hong Kong still to be made public regarding the Mile Championship second Schnell Meister (Kingman), third Danon The Kid (Just A Way), fourth Indy Champ (Stay Gold) and sixth Salios (Heart’s Cry), all of whom still hold tickets for the Hong Kong Mile, along with Gran Alegria’s Yasuda Kinen (Gr 1, 1600m) conqueror Danon Kingly (Deep Impact) who sidestepped Sunday’s contest.

“He’s outstanding in Hong Kong,” Lui continued. “Of course, the new challenge is to test him and show how good he is. He was only against local horses, and I appreciate that fact, so I’ll be happy for him to be racing against some other outstanding horses. I’m not sure which horses will come but we can be sure that the Japanese horses are strong.”

The trainer reported that “everything is fine” with Golden Sixty since the race and that he and Ho are pleased with his development this season. In his younger days, the Australian-bred would be keen in his races and at times unsettled post-race.

“Vincent felt that the horse is more mature and more relaxed than last season and more sensible,” Lui added, and confirmed that he and owner Stanley Chan are still hoping to target the Yasuda Kinen at Tokyo in June. “If we can go outside of Hong Kong, the first choice is still Japan because it’s closest to us and the horses there are strong.”

Such is Golden Sixty’s domestic superiority, Caspar Fownes is giving serious consideration to switching Sky Darci’s focus from the Hong Kong Mile to the Hong Kong Cup (Gr 1, 2000m) next month to avoid another clash with the champion.

“I have to give it some thought but if I keep him at a mile, he’d probably run a similar race, he’d run third, fourth or fifth. So, do we go to 2000 metres where he probably could do something there? I’ve got to give it some serious thought and see what’s coming from overseas in the 2000-metre race,” Fownes said.

“He’s not going to beat the first or second horses from Sunday because they beat him fair and square. He just had his chance at the weekend, one out, one back, and he wasn’t good enough.”

And the champion trainer believes any horse entering Golden Sixty’s home patch will face a mountainous task to beat the champion if he turns up in his prime.

“Gran Alegria was the only one that would mix it with him and she’s retired. He’s a quality horse, he is the real deal,” Fownes continued.

“Vincent rides that horse really well and the horse himself is something else: to run his last 800 metres the other day in 43.2 seconds, with a 21.69 and 21.51, that’s unbelievable. He’s just a machine and it doesn’t look like there’s anything that will come close to him, the way he’s going.”

Fownes and Lui, meanwhile, were both pleased with their sprinters, with the latter’s Lucky Patch (El Roca) winning the weekend’s Jockey Club Sprint (Gr 2, 1200m) ahead of the former’s Sky Field (Deep Field) in third. Both head to a wide-open edition of the Hong Kong Sprint (Gr 1, 1200m).

“Sky Field is the one I think is still a winning chance on the big day,” Fownes said. “We’ll be trying a change of equipment with him next time and that could be the making of the horse. He’ll get some headgear on, either blinkers or cheekpieces, something like that. We’ll see how he is and how he reacts to that, and, if he relaxes with them, then he’d be a good chance to really perform well.”

Lui is moving ahead with confidence, too, thanks to Lucky Patch’s emergence as a serious player this autumn. “He has improved a lot,” he observed. “When he first came to Hong Kong he was quite keen but this season he is more relaxed and races under control, so he is improving. The sprint is an open race.”

The pedestrian Jockey Club Cup (Gr 2, 2000m) on Sunday saw the 107-rated Reliable Team (Reliable Man) win from the front in a Class 5-standard time and Fownes is not writing off Columbus County’s (Redwood) chances of making the frame in either the Cup or the Vase next time, despite placing only fifth in the field of seven.

“At this stage we’re looking at the Vase but Joao (Moreira) has been asking about if he’ll be going in the Cup so I’ve said to just let me look at the race and see what’s going and then make a decision. But in my heart, I want to go 2400 metres because I think that will suit him best.”

Moreira is booked to ride Japan’s Glory Vase (Deep Impact) in the Hong Kong Vase – the pair triumphed in 2019 – and there could be Vase clues in Sunday’s Japan Cup (Gr 1, 2400m) at Tokyo with five contenders also holding entries to the Sha Tin stayers’ feature, including the Irish-trained duo Japan (Galileo) and Broome (Australia), and the Japanese gallopers Uberleben (Gold Ship), Mozu Bello (Deep Brillante) and Authority (Orfevre). Japan’s Breeders’ Cup Filly & Mare Turf (Gr 1, 11f) heroine Loves Only You (Deep Impact) holds a Vase entry – as well as the Cup – as does Curren Bouquetd’or (Deep Impact) who is reportedly out of the Japan Cup due to heat in a leg.

“The Japanese are just a notch above us, more so this year than last year and last year they still got the two wins. This year our challenge seems to be weaker and then we’ll have one or two from Europe coming in as well,” Fownes noted.

One old favourite who will not race on the second Sunday in December is the Bon Ho-owned Southern Legend (Not A Single Doubt), who bows out with a fifth-place behind Golden Sixty last Sunday. The Fownes stable stalwart has competed at the Hong Kong International Races each year since 2017 when he won a Class 1 handicap on the undercard. He afterwards placed third and then second in the Hong Kong Mile and eighth in the Hong Kong Vase, while his big-race wins include the Champions Mile and two editions of the Kranji Mile (Listed, 1600m) in Singapore.

“We’re retiring the old guy,” Fownes revealed. “He looked really well at the weekend but Bon asked, ‘What do you think, should we retire?’ and I said, ‘Yes, it’s time now’. We had him really well prepared to run a cheeky race but he showed us that he’s had enough. He deserves his retirement, he’s won a few grand short of $60 million and he’s been a wonderful horse. We’ll find him a really good home to go back to in Australia.”

With another proven Group 1 performer exiting Hong Kong’s already depleted top tier, a Golden Sixty victory against the kind of serious incoming opposition that has been lacking in recent times would be a timely tonic.