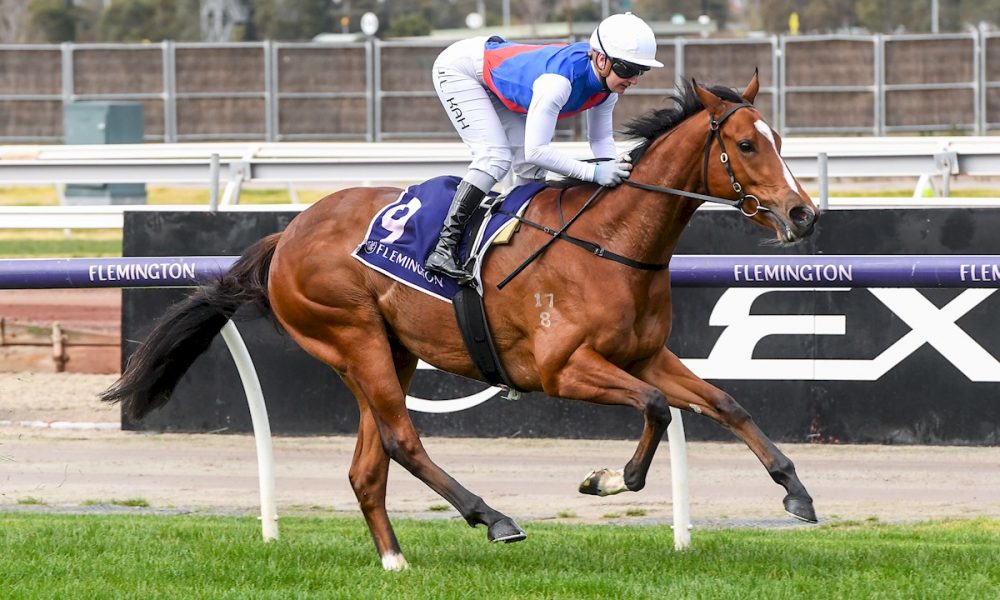 When Gonnadancealot won the 1800m first race at Flemington last Saturday, it heralded the start of not just one but perhaps two exciting Australian careers – that of the two-year-old filly, and her sire Sir Prancealot.

The Irish-bred 11-year-old is a stallion who, in a way, may have slipped through some cracks on his way to landing in some fertile fields. Australian – and American – breeders are poised to be the beneficiaries.

The son of Tamayuz was given only six starts before being bundled off to stud, the last of those runs, significantly, being a success in the Flying Childers Stakes (Gr 2, 1000m) at Doncaster in 2012.

Sir Prancealot stood for just a handful of seasons at Tally Ho Stud in Ireland before a shuttling agreement to Australia morphed into the cementing of a new Southern Hemisphere base.

He has ended up finding his home away from the traditional hotbeds of Australian breeding – in South Australia – at the Hayes dynasty’s Cornerstone Stud, and like another famous product of the Barossa Valley, seems to be growing better with age.

Sir Prancealot may not have quite been a stud sensation in his home country, but did put runs on the board. The David Elsworth-trained Sir Dancealot has been the main flagbearer, with four G2 wins, all over 1400m. Miss Amulet won last year’s G2 Lowther Stakes (1200m) at York, while Sir Busker was a Royal Ascot winner, also last year, in the Royal Hunt Cup Handicap (1600m), before running third there this year in the G1 Queen Anne Stakes over a mile.

But fairly early on, some canny judges twigged that Sir Prancealot’s offspring may be very well suited to firmer tracks a long way from home.

The mare Beau Recall won one of two starts in Ireland before being shipped to the US, where she has so far run second at G1 level five times and won four G2s.

Lady Prancealot won one of five in England before also crossing the Atlantic, where two G3 victories were followed by a G1 triumph in the 2000m American Oaks at Santa Anita in December, 2019.

And Madam Dancealot won two of six in England, including at G3 level, before also being tried in America, where three narrow G1 placings were mixed with a pair of G2 victories.

Now, from his first Australian crop of just 42 live foals, Sir Prancealot has had six runners for two winners, in quick succession. Belle Of Yorkes took out a $100,000 two-year-old Saturday race at Murray Bridge, two weeks before Gonnadancealot stamped herself a live Oaks contender last Saturday.

The Rob Griffiths and Matthew de Kock-trained Gonnadancealot has as an owner someone who went the opposite way to the filly’s sire. Australian-born, England-based trainer Jane Chapple-Hyam paid $30,000 for her at last year’s Magic Millions Perth Yearling Sale, perhaps with a view to breeding from her later back in Britain. That price wasn’t high, but the purchase may have spoken volumes in regard to what Chapple-Hyam saw of her sire in Britain and Ireland.

“I’d say her purchase was a consequence of how well the Sir Prancealots have done up there (in the Northern Hemisphere), in that Jane felt there might’ve been some value down here,” says Sam Pritchard-Gordon, one of two Sams running operations at Cornerstone Stud, along with managing director Sam Hayes, grandson of the legendary Colin Hayes.

Gonnadancealot’s commanding 2.75-length win on Saturday has Sir Prancealot sitting in 17th place on the Australian first season sires’ list, despite his limited opportunities. It also has those running Cornerstone – the old Linsday Park Stud – counting their blessings to have acquired the stallion, who the stud now shuttles each year to the San Miguel Stud in California.

“He was standing at Tally Ho in Ireland and in his third season the opportunity arose for us to lease him for his Southern Hemisphere rights, which we did,” Pritchard-Gordon tells It’s In The Blood. “Then after two years we were given the opportunity to buy out Tally Ho. We jumped at the chance, and hopefully it’s landed on the right foot.

“His eldest are two-year-olds down here, but in the interim while we were waiting for his stock to hit the ground and grow out to what they are now some of his fillies in Europe were sold to America, with some great results. There was a real groundswell of Americans chasing them for their ability to train on, to run ten furlongs, to handle tight tracks, to handle the heat, and perhaps most importantly to handle firm tracks as well. So I think we’ve been the beneficiaries of that really, and I’d like to think it’s starting to play out like that now down here.”

After serving small numbers in his first season in South Australia, Sir Prancelot has covered books of 100-plus in the subsequent two years, partly a consequence, Pritchard-Gordon says, of the promise his offspring have shown various trainers early on. He will stand for a mere $9,000 again this season, while his fee is $US15,000 at San Miguel, where he has covered two books of 120-plus.

“For the first time in a very long time San Miguel have said they’ve had mares travel from Kentucky to California to visit him,” Pritchard-Gordon says. “That’s a reflection of a breeding mindset that this stallion can do it, so that’s one feather in his cap.”

Another is that Sir Prancealot appears to have got the best out of Gonnadancealot’s dam Tresillian. A Danehill mare who won once – at Morphettville – from 17 starts, the now 20-year-old Tresillian had five named foals from five different sires before Gonnadancealot, all of whom did precious little.

The key here appears to be the blend of the Danehill-free Sir Prancealot – who’s from the less-travelled Mr Prospector sire line of Gulch (USA)-Nayef (USA)-Tamayuz (GB) – with Danehill line mares.

“That sireline, when placed over a Danehill line mare, has produced a stakes performer at a rate of 25 per cent, which is just terrific,” Pritchard-Gordon says.

“He’s had two winners to date in Australia, which has really fulfilled what we wanted to see. Belle Of Yorkes is out of a Redoute’s Choice (Danehill) mare, and Gonnadancealot is out of a Danehill line mare.”

“There was a slight concern when we first launched him that he was an out-and-out speed horse, but I think he’s more than that. He’s very rounded. His offspring are running distances and they’re training on.”