Good, but how good? 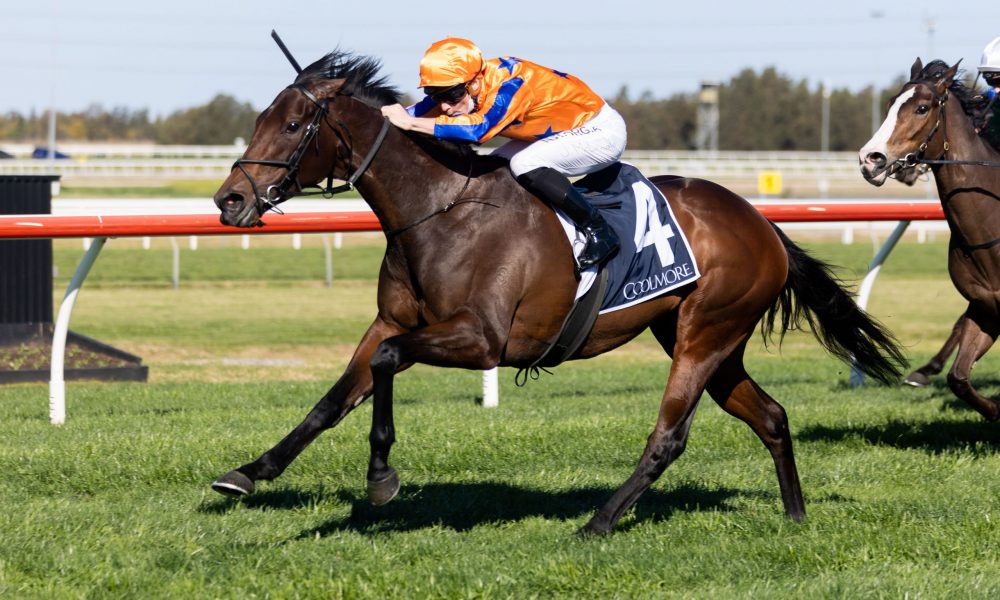 We knew she was good and, although her highly anticipated return to top-line racing was delayed slightly, Entriviere (Tavistock) lived up to all expectations with a powerful performance in the Sheraco Stakes (Gr 2, 1200m) at Kembla Grange on Saturday.

Her record is impressive, just eight starts for six victories and two seconds, her career beginning less than twelve months ago.

A late November foal, she didn’t trial until September of 2019 and didn’t win a trial until August the following year as a four-year-old.

She won her maiden on debut at Matamata, recording a smart 1:10.73 for the 1200 metres, then three weeks later she was too good at Tauranga over 1300 metres. Her first defeat, finishing second over 1400 metres, took place at Avondale.

On Karaka Millions night in late January, again at Ellerslie, she was dominant in the Concorde Handicap (Gr 3, 1200m) against some handy sprinters, making her first start in stakes class.

Given her opportunity in Sydney the following month in the Sapphire Stakes (Gr 2, 1200m), she was a gallant second, chasing hard but beaten a head.

Saturday’s superb performance saw her join in at the 200 metres and power clear. We in New Zealand knew. However, it’s gratifying that her quality is now on display in front of an Australian audience, signalling a spring to look forward to.

Bred by Manawatu trainer Kevin Gray and Kevin’s wife Kathleen, Entriviere was never entered for sale and was sold privately.

Her dam, Marcey’s Belt (Golan) was purchased from the Monovale Farm draft of New Zealand Bloodstock’s Carnival Yearling Sale in 2007, knocked down for $35,000 to respected agent Gary Carvill on behalf of the Grays, then trained by Kevin. She won three up to 1400 metres including at Awapuni.

Kiwi Chronicles caught up with Gray for some background. “Marcey’s Belt was a lovely filly and a lovely mare. At the yearling sale, I found the filly and even though Gary Carville signed for her, I paid the bill,” Gray said.

“She had plenty of speed and should have won two or three more. I like to give my apprentices their chance but with experienced riders she might have won more.”

Entriviere is one of her four winners. To Power (Oasis Dream) she also foaled Listed placed, three-race winner Satin Belt.

Gray added: “Marcey’s Belt has a three-year-old filly by Burgundy named Gucci Belt. She’s had a couple of quiet trials and goes along nicely. She’s not far away from racing once we get some better tracks.

“We have a yearling sister to Gucci Belt going to the Karaka sale in January. She’s a nice filly too. I can’t seem to breed any colts so she will go to Karaka. The mare is at Cambridge Stud and is to be mated with their new stallion Hello Youmzain,” ended Gray.

Neither Entriviere’s grandam, Stray (Tale Of The Cat), nor her third dam, Shynzi (Danzig), made it to the races but both have proven to be very good producers.

Stray has produced ten winners for three stakes performers. They include the lightly-raced Adrift (Zabeel), winner of the Light Fingers Stakes (Gr 2, 1200m).

Shynzi’s dam, Shywing (Wing Out) was a runner and provides another link to Entriviere’s sprinting ability. Shywing won eight times up to a mile for five Listed wins: three at Hollywood Park and two at Santa Anita. Among Shywing’s nine stakes placings were a Group 1 second, placing in the La Canada Stakes (9f) at Santa Anita.

Beyond a mile (on paper)

Except for Shywing, in some ways, Entriviere’s bloodlines appear stouter than the sprinting ability she obviously has.

The gene descending from Shywing must be strong because, not all, but most of the sires in her pedigree show a preference for distances beyond a mile.

In the “not all” category is her sire Tavistock (Montjeu), who had a sharp turn of foot. His stock, however, largely shine at distances beyond a mile which is not all that surprising given that his sire Montjeu (Sadler’s Wells) was a dual Derby winner who won four Group 1 races at the mile and a half distance.

Marcey’s Belt’s sire Golan (Spectrum) succeeded at the Guineas distance of a mile but was also placed in two Derbies and later scored over 12 furlongs at Group 1 level. Golan is from a mare by dual Derby winner Generous (Caerleon).

The last sire in the third generation is Group 2 sprinter Tale Of The Cat (Storm Cat).

Clearly, the mix has worked brilliantly in Entriviere’s case but on paper she wouldn’t look out of place in the Cox Plate.

The Kiwis took out just one of the 12 black-type races run at Kembla Grange, Flemington and Belmont, but being that Entriviere is a mare, it was fitting that five of the remaining eleven are out of mares bred in New Zealand.

Bobbie Lewis Stakes (Gr 2, 1200m) winner Splintex is from the Group 2-placed, seven-time winner Acquired, a daughter of O’Reilly (Last Tycoon). Splintex took his earnings beyond the million with his seventh win which includes three Group victories. His grandam is by Centaine (Century).

Crystal Bound (Not A Single Doubt) is from the Melbourne winner Crystalized, a daughter of Zabeel (Sir Tristram) and half-sister to South Australian Derby (Gr 1, 2500m) winner Zarita (Pentire) plus two other stakes winners.

Palace Rock was foaled in New Zealand but conceived in Australia, as was the dam of Poseidon Stakes (Listed, 1100m) winner Ranch Hand (Fastnet Rock). His dam Mezulla (Shamardal) is from Vamparella (Kashani) who raced here and was a Group 2-placed Ellerslie winner.

Incentivise (Shamus Award) proved he was up to the hype with a tough victory in Saturday’s Makybe Diva Stakes (Gr 1, 1600m). Stringing together seven on the trot and fresh up from a Queensland campaign, Incentivise was given no favours after taking the lead at the 1200 metres of the Flemington feature.

Hounded by quality mare Tofane (Ocean Park) at the 200-metre mark, he refused to let her pass, but once he fought her off he still had to withstand late challenges from Mo’unga (Savabeel) and last year’s Cox Plate (Gr 1, 2040m) winner Sir Dragonet (Camelot).

Yet prevail he did, sending a huge message to his peers. This guy is real.

His half-brother, Ardrossan (Redoute’s Choice), has just begun his third season at Waikato Stud and it would interesting to learn whether Incentivise’s recent efforts, and especially the big win on Saturday, has created any uptick in Ardossan’s bookings.

In a limited race career Ardrossan showed any amount of ability and it is now clear that their dam is a top-class producer, with four stakes winners and eight winners from eight to the races.

Officially a half-brother, Ardrossan is bred on the same pattern as his sibling. Incentivise’s sire Shamus Award (Snitzel) is a grandson of Redoute’s Choice (Danehill), Ardrossan’s sire.

It may be advertising but the statistic is still powerful.

The reference is to the St James’s Palace Stakes (Gr 1, 1m) and its strong record as a sire making race.

Given the sire records of many of the race’s winners and placegetters, both studs have every reason to feel confident about each sire’s future.

Coolmore is all about stallions and they stand three winners of the race under discussion. That total was four until recently but their Mastercraftsman (Danehill Dancer) died last month.

Credit must go to their marketing department and Richard Henry for uncovering the following:

The 2002 victor, Rock Of Gibraltar (Danehill) chimes in with 137 while next, with 83, is Mastercraftsman.

Frankel is particularly noteworthy. Frankel’s win in the great race was ten years ago and his 78 stakes winners from just six crops is staggering. Appropriately, Frankel sired the 2018 winner Without Parole.

A history of sire success

Prior to 2000, the race is littered with successful sires, some of whom found their way to Australia or New Zealand.

Two years before Faux Tirage, Tudor Minstrel (Owen Tudor) won the race and the year after, Palestine (Fair Trial). Both sires were successful and influential.

Through the remainder of the 1950s and 60s saw Tamerlane (Persian Gulf), Silly Season (Tom Fool), Reform (Pall Mall) and Petingo (Petition) put their names on the trophy. Each made a significant contribution to international bloodlines and pedigrees.

Champion Brigadier Gerard (Queen’s Hussar), Thatch (Forli) and Kris (Sharpen Up), sire of 75 stakes winners, took out the race during the 1970s.

When European pattern racing was instituted in 1971, the St James’s Palace Stakes was accorded Group 2 status and in 1988 promoted to Group 1.

Placings are okay too

Luigi Muollo, owner of Novara Park, can take heart that second place in the Royal Ascot feature can be a plus. His King of Comedy took it to Circus Maximus in game fashion in the 2019 running.

Zoffany (Dansili) had the misfortune of being foaled the same year as Frankel and was second to him in the 2011 race. Zoffany has sired 46 stakes winners including current star three-year-old filly Mother Earth.

Following Excellent Art home in 2007 was Duke Of Marmalade (Danehill) who has sired 46 stakes winners.

In 2010 Siyouni (Pivotal) finished only fourth behind Canford Cliffs (Tagula) but is currently the leading sire in France, sire of champions St Mark’s Basilica, Sottsass, Laurens and 50 further stakes winners.

Recent results feed upon themselves

Dawn Approach (New Approach) was successful in 2013 and has sired 15 stakes winners including this year’s winner Poetic Flare. Second that year was Toronado (High Chaparral), an up and coming sire who is making a big impression internationally.

Of the most recent runnings, 2014 winner Kingman sired the 2020 winner Palace Pier. Night Of Thunder (Dubawi) was second to Kingman and is performing well as a sire.

The 2015 edition went to Gleneagles (Galileo) who has 16 stakes winners in just three crops and 2016 winner Galileo Gold (Paco Boy) has three stakes winners in his first crop for the current season. Coolmore’s The Gurkha (Galileo), who was second to Galileo Gold, has made a promising start to his stud career.

Breeders have more than performance, pedigree and type to consider. Performance in the St James’s Palace Stakes is a significant factor.