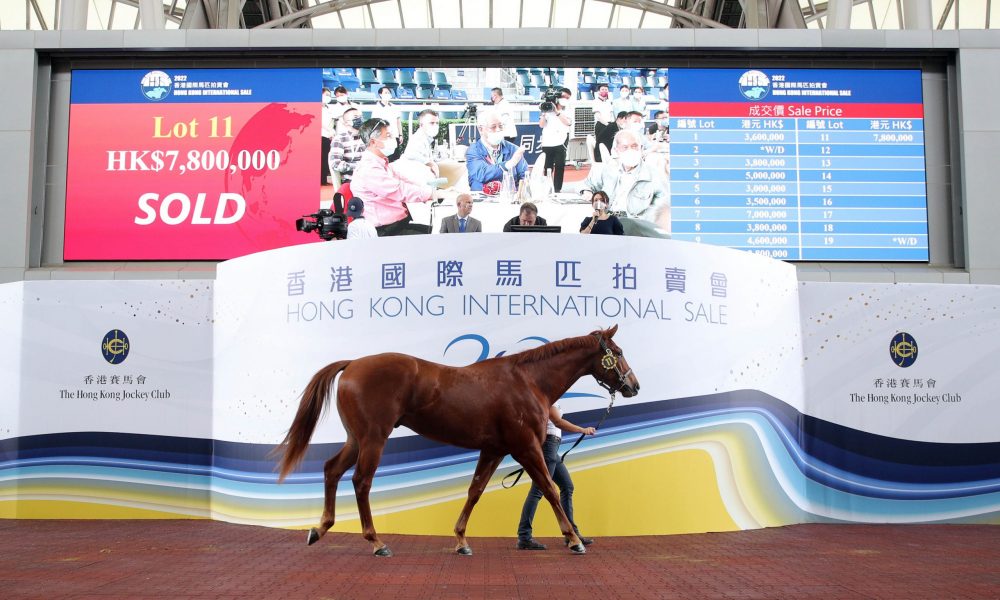 Tasmanian nursery Grenville Stud celebrated a new milestone last weekend when one of its graduates led the way as the sales topper at the 2022 Hong Kong International Sale at Sha Tin.

The two-year-old gelding, by record-breaking sire Deep Field (Northern Meteor) out of former Darley mare Bousquet (More Than Ready), entered the makeshift sales ring in the Sha Tin paddock as the tenth of 17 horses. After a spirited bidding war, he emerged as the leader of the pack, being knocked down to the successful bid of owner Yue Yun Hing for HKD$7.8 million.

It was a significant upgrade on the $550,000 paid by Boomer Bloodstock’s Craig Rounsefell on behalf of the Hong Kong Jockey Club at last year’s Inglis Premier Yearling Sale. At the time, Rounsefell said that he was the best Deep Field he’d seen all sales season and, with Deep Field’s continued success in Hong Kong, he was long touted as the likely sales topper at Sha Tin’s annual sale.

He was one of four lots to top HK$5 million (approx. AUD$950,000), along with a HK$7 million Starspangledbanner (Choisir) gelding originally purchased from the Goffs Orby Yearling Sale, a Snitzel (Redoute’s Choice) gelding sourced at the 2020 Inglis Australian Easter Yearling Sale that sold for HK$5.8 million and a Fastnet Rock (Danehill) three-year-old purchased from that same sale that sold for HK$5 million.

The McCulloch family has produced plenty of leading lights in its almost five decades at the helm at Grenville Stud, led by Caulfield Cup (Gr 1, 2400m) and Australian Derby (Gr 1, 2400m) winner Mongolian Khan (Holy Roman Emperor), but the Deep Field gelding could represent a new foray into Asia for the Tasmanian stud.

Bart McCulloch, who operates Grenville Stud – located just outside Launceston – in conjunction with his father Graeme, said that when they purchased Bousquet in 2019 in foal to Deep Field, they hoped that she would produce a nice foal but that their expectations had been well and truly exceeded.

“Bousquet was purchased at the 2019 Sydney broodmare sale for $40,000,” McCulloch told Asia Bloodstock News. “At the time it appeared to be a good purchase as Deep Field was on the rise and his service fee had already increased to $40,000. She was a nice mare and we were confident she would leave a good type.

“In hindsight, it was a very shrewd purchase and we never imagined the colt would realise $550,000 as a yearling let alone over $1.4 million just over 12 months later. I think it will be a while before we get such a good return on our investment again!

“He was always a nice, strong, forward colt but he developed so well and thrived throughout his yearling prep and he developed into a really lovely horse with a great temperament.

“It was a proud day when we sold the colt for $550,000 as a yearling and it is great to see him continuing to progress so well and to achieve a result like that in Hong Kong is pretty amazing. We really look forward to seeing him make his mark on the race track as we get no greater thrill than seeing horses we breed do well on the track.”

McCulloch reported that Bousquet had yet to produce a follow-up foal to Saturday’s sales topper but is set to foal down to Shamus Award (Snitzel) later this year as part of a mammoth upcoming breeding season for the nursery.

“Unfortunately, Bousquet has not been a simple breeder since, losing her next foal while foaling and then slipping the following year,” he said. “However, she is back in foal to Shamus Award currently.

“We have a nice draft of weanlings that are progressing well and we will be offering in Tasmania and also interstate at the yearling sales next year. It is going to be a busy breeding season with approximately 40 mares due to foal down, among them Bousquet, along with the duties of our three resident stallions Stratosphere, Zululand and Mawingo.”

Unsurprisingly, it was announced last night that Danny Shum would train the Deep Field gelding, given he has prepared most of the owner’s horses.

And Yue’s penchant for naming horses with the suffix -field looks certain to continue given his new acquisition is by the incredibly successful Deep Field, who has already claimed the record for the most successful Hong Kong season by a sire with earnings of HK$55,392,670 with two meetings left in the term. The previous benchmark was HK$53,849,500, set by Medaglia D’Oro (El Prado) last year after the incredible season of his son Golden Sixty

Commenting on the sale, which averaged HK$4.1 million, up from $HK2.95 million in 2021, the HKJC’s newly appointed executive Manager, international sale/owners advisory services Danny Rolston said: “With significant increases in average and gross turnover, the Club is overall really happy with the outcome of the sale – the strong results are a reflection of the Hong Kong Jockey Club members’ confidence in the horses that have been selected for the sale, the results of the graduates that have come out of the sale but most importantly the confidence and strength of Hong Kong racing and this is a reflection of the significant increases in prize money for next season.

“I think the two top lots were fairly obviously going to be the highlight horses, they breezed particularly well and they’re both by stallions that are very popular. Beyond that it’s really hard to predict what the horses are going to sell for and just how much the turnover will be but we’re very happy to see such a significant increase in gross turnover.

“While we sold 17 horses here today, that was just the select group of horses that was decided were completely well suited to the environment in Hong Kong to be offered at the sale. “There’s still 12 that didn’t come to the sale and that is a reflection of the standard that we have before we even bring them through for the auction.”