Heading for the sun 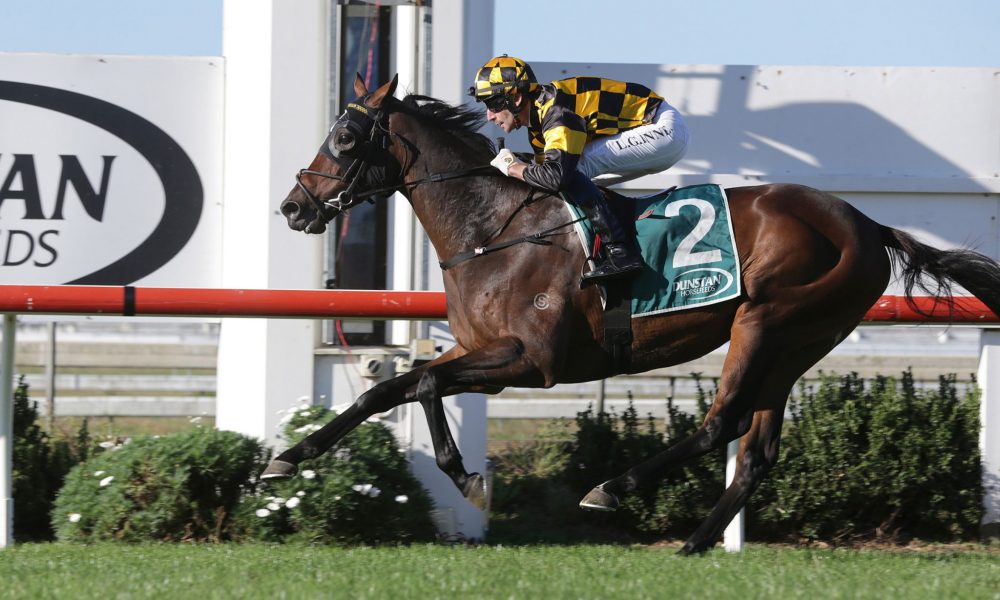 Queensland sunshine beckons for two of the three stakes winners from Pukekohe’s Saturday meeting, while the third made a huge impression.

Although we have not seen the New Zealand Derby (Gr 1, 2400m) winner, Asterix (Tavistock), since that race on March 5, another son of the much missed stallion Tavistock (Montjeu) has all the makings of a future top class career in Pinarello.

The gelding’s last-start victory in the Championship Stakes (Gr 2, 2100m) on Saturday was his career third and confirms the promise shown on Avondale Guineas day when an impressive winner over the same distance.

His run in the Derby saw him hampered around the 800-metre mark and he ran on for fifth when the race was all but over, then trekked to Awapuni for the Manawatu Classic (Gr 3, 2000m), only to be scratched at the barrier due to a bleeding tooth.

Despite being given the run of the race by Leith Innes, Pinarello was not without his problems at Pukekohe, losing a hind plate during the race, yet dealt with his opponents by booting clear before the 200 metres. At the line he was cruising, Innes easing him well short of the post. As an indicator prior to a Queensland foray, the Queensland Derby (Gr 1, 2400m) being a possible target, it could not have been better.

“Leith rode him nicely and he travelled very well in the run and you saw his class when he extended away like he did,” said trainer Roger James. “As long as he pulls up well, then he will be in serious consideration for a trip to Brisbane for the Queensland Derby.”

The Rough Habit Plate (Gr 3, 2000m), scheduled for May 14 at Doomben, may be the three-year-old’s next start prior to the Derby tilt two weeks later at Eagle Farm.

And what a wonderful job his dam Zonza (Zabeel) is doing. She was talented enough to take out a Group 3 race at Caulfield, one of her five wins, before embarking on a stud career which has so far resulted in three stakes winners from just four foals to race.

Pinarello was catalogued for sale in Book 1 of the 2020 Karaka Yearling Sales but Brendan and Jo Lindsay of Cambridge Stud thought it sufficient to retain him after being passed in with a $300,000 reserve.

Zonza’s 2017 filly foal, Vernazza (More Than Ready), succeeded in the Matamata Breeders’ Stakes (Gr 2, 1200m) and was a length second in Ellerslie’s Diamond Stakes (Gr 1, 1200m) behind Cool Aza Beel (Savabeel). She was retired this past February.

Zonza produced a sister to Pinarello in 2019, a filly by Almanzor in 2020, missed in 2021 and visited Bivouac (Exceed And Excel) last spring.

Westbury Stud’s Redwood (High Chaparral) is quietly working away and looks to have a more than promising sort, Sharp ‘N’ Smart, ready to give the stallion some overdue recognition.

On debut at Ruakaka last month, the gelding ran about more than once in the run home yet still somehow managed to run second.

In Saturday’s Champagne Stakes (Listed, 1600m) at Pukekohe he gave the leaders a big start from the top of the straight, still showed some greenness, but once balanced powered down the centre of the track to nab the leader on the line.

“I really think a lot of this horse, he is the type that gets you up in the morning,” said co-trainer Graeme Rogerson. “He has a tremendous amount of raw ability and is still very green, but you saw a touch of what we think he is capable of in that performance today.”

Rogerson added: “We are going to wait and see how he comes through the race, but if he pulls up well then, I think he will be on a plane to Queensland.”

The 2019 edition of the Champagne Stakes provided Quick Thinker (So You Think) with a launching pad to his career which included the Australian Derby (Gr 1, 2400m).

Rogerson purchased Sharp ‘N’ Smart from Westbury Stud out of Book 2 at the 2021 NZB Karaka Yearling Sale for $55,000 and attempted to pinhook him in last November’s Ready To Run Sale. However, he was passed in with a reserve of $90,000 and Team Rogerson have justified their reason in retaining him.

Redwood also sired the formerly New Zealand-trained Tokorangi, the 2021 Waikato Guineas (Gr 2, 2000m) winner, to a return to winning form in the Benchmark 78 at Caulfield on Saturday.

Transferred from Pam Gerrard in Matamata to Mike Moroney in Victoria last year, the mare flew down the outer from second last in what was an impressive performance, her third career win in 11 starts.

The four-year-old was backing up from scoring the Woodville-Pahiatua Cup (1600m) just six days previously and employed the exact same tactics, going straight to the front and defying his opponents to run him down. It was his fourth win and maiden stakes win in 12 starts.

He is the fourth winner and second stakes winner from his unraced Lonhro (Octagonal) dam, Shanro, the other black type scorer being Listed winner Windsor (Alamosa).

Aptly named (after an ultra-hot pepper) Carolina Reaper (Vespa) made a huge impression with her hot finish in the Easter Handicap (Gr 3, 1600m) at Ellerslie on Saturday.

She began fairly but soon drifted back through the field to settle third-to-last at the 1200 metres. At the 800 metres her situation had not improved and rounding into the straight she had just one behind her. Moving widest she took time to balance, was bumped off stride at the 300 metres, collected herself again then powered home to grab the lead inside the 50 metres. At the line she was doing better than anything else, increasing her three-quarter-length margin with each stride.

“She did us proud and I think she is a very good horse in the making,” said co-trainer Graham Richardson. “I had always thought she was a stakes winner in waiting, but to do it at her 14th start is a lot quicker than I thought it would be.”

As a three-year-old, Carolina Reaper was tried against some of the country’s better fillies, including in the 2021 New Zealand Oaks (Gr 1, 2400m), but at four she seems to have found her niche at 1600 metres, the distance of all four of her wins, three taking place in her last five starts.

Richardson found the mare at Karaka in Book 2 of the 2019 yearling sales series, taking her home for the bargain price of $12,000.

Her sire, Vespa (Elusive City), the champion New Zealand Two-Year-Old of his year, is flying somewhat under the radar and from diminishing opportunities has sired four stakes winners and 21 individual winners.

His oldest progeny are four, however it is going to be quite a hill to climb for the stallion as he attracted just 22 mares last spring.

Judging from the sires along her bottom line, Carolina Reaper has some nice bloodlines, being from a Fastnet Rock (Danehill) mare while her granddam is by Montjeu (Sadler’s Wells) and her third dam is by Riverman (Never Bend).

Another stallion who is enjoying his best season yet is White Robe Lodge’s Ghibellines (Shamardal). He sired his fifth individual stakes winner and fourth this season through three-year-old filly Burgie in the Warstep Stakes (Listed, 2000m) at Riccarton on Saturday.

Burgie settled back of midfield and then improved from the 800 metres to be handy yet five-deep rounding into the straight. She moved into second and soon after shot to the front near the 200 metres. To the line she had their measure to hold on strongly by a half-length for her second career win at start seven.

“She won really well today, that was a big performance,” said co-trainer Shane Anderton. “She deserved a bit of black type after some big efforts in her last few starts.”

Regarding her previous start in the NZB Insurance Stakes (Listed, 1600m), Anderton added: “She could have won that race if she’d had any luck at all that day, but the way she found the line certainly gave us a bit of confidence for the step up to 2000 metres this afternoon.”

From a pure White Robe Lodge family, Burgie is the only named foal from Norah (Gallant Guru), a six-time winner as well as a half-sister to two stakes winners including Requisite (Yamanin Vital), whose five wins featured an Eclipse Stakes (Gr 3, 1800m) at Sandown in Melbourne.

Her granddam is a Random Chance (Three Legs) half-sister to Renee (Cautious Style), winner of the Stewards’ Stakes (Gr 3, 1200m) at Riccarton. Norah produced a sister to Burgie in 2019, missed in 2020 and foaled a colt by Jon Snow (Iffraaj) last spring.

Prise De Fer (Savabeel) was simply too strong and too classy in bagging his third Group victory and ninth career win in Saturday’s Canterbury Gold Cup (Gr 3, 2000m), running out the distance in a very smart 2:00.03.

He began well but Jason Laking allowed him to ease and settle midfield (rails) past the 1600 metres. He held his position to the 1000 metres, moved away from the fence at the 600 metres and was a handy fourth starting the run home. He moved up to be second, led at the 200 metres, fought off one brief challenge then came away for a decisive win.

“It was a lovely ride by Jason Laking, who continues to serve the stable very well when called upon,” said trainer Mark Walker. “He presented the horse at the right time and it was a confident display.”

Walker believes that the six-year-old has more wins in him.

“I still think he’s capable of another really good season as a seven-year-old. He’s been well looked after,” he said.

The Savabeel (Zabeel) gelding took his earnings to $537,525 and has raced in the best of company for the last three seasons, having also secured a win in the Rich Hill Mile (Gr 2, 1600m) as well as four Group 1 placings.

Wannabe ‘N’ Paris (Reliable Man) is one tough mare, a claim that can be substantiated after her all-the-way win in last Monday’s delayed Riverton Cup (Listed, 2147m).

The five-year-old mare’s maiden stakes success and seventh career win at start 41 tells only part of her story as the mare did not race as either a two or three-year-old, although she did trial twice as a late two-year-old and had a further five trials at three.

The daughter of Reliable Man (Dalakhani) was sent from the North to the South Island and made her debut as a four-year-old in late October 2020, finishing second over 1200 metres.

She took nine starts to break her maiden, a year ago at Riverton, then promptly won her next start two days later, racing on to rack up 18 starts for the season but without further success, her last race at four took place on July 25.

There was no let-up, as she started the current season at Riccarton over 1800 metres on August 7, adding win number three (career start 23) at the same track five weeks later. Win four occurred at start 31, a win in the Cromwell Cup (2030m) on November 28th.

Two starts on, win five (start 33), was at Timaru and at start 40 she scored at Invercargill on April 2.

In Monday’s delayed Riverton Cup, she led all the way and defied her opponents to run her down, holding on gamely by a head, on what was an incredible 23rd start for the season. She was down to run in Saturday’s Canterbury Gold Cup (Gr 3, 2000m) just five days after her Riverton Cup triumph but was scratched.

The tough racemare has effectively been in training for 19 months for 41 starts without a break.

Wannabe ‘N’ Paris’s dam, Wannabe Queen (Bernstein) was bred in the USA and was imported to Australia as a foal at foot of her dam, Irish-bred Royale Wannabe (Sadler’s Wells). Both found their way to New Zealand in 2008. Wannabe Queen won twice in New Zealand then produced four foals of which three are winners. The mare has ceased breeding.

All five of Royale Wannabe’s foals are winners and her dam is a half-sister to two American Group winners, namely Dance Master (Gone West) and Naninja (Alysheba).