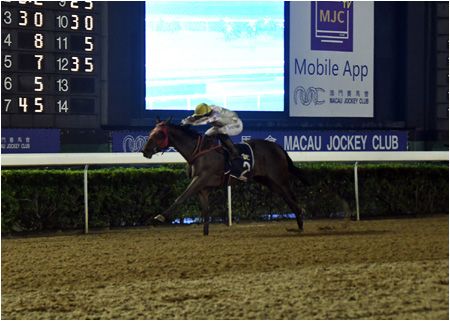 Brazilian Fausto Henrique and Frenchman Jean-Baptiste Hamel have emerged as serious contenders for the title of Macau’s Champion Jockey after both kicked home doubles on the weekend.

Both riders have been in superb form in recent weeks with Henrique in third spot in the rider’s standings on 22 wins, and Hamel in fourth position on 21 victories. Roger Yu still leads the way on 24 winners after booting home one winner on the weekend, with four-time champion Luis Corrales in second spot on 23 wins.

Henrique struck first on Friday night when he scored on Stanley Chin’s Win Win Hooray (Bel Esprit) by virtue of a lovely rails-hugging ride in the Class 3 & 4 over 1050 metres.

On a night where some riders were content to skirt a bit deep away from the rails, Henrique summed the track up perfectly after the rain came with the rail riding slick all night.

Henrique then produced a gem of a ride on the Tony Fung-prepared Mr Fortune (Jet Spur) in the last of the night, the Class 4 & 5 over 1510 metres.

Mr Fortune, the race favourite, was drawn out in gate 11 and, with just 110 metres to the first turn, Henrique did a brilliant job to position the favorite in fourth spot on the rail. From then on the three-year-old enjoyed the run of the race off the speed before darting between runners at the top of the straight and powering away for a strong win.

Hamel’s joy came on Saturday’s turf card when he got off to a flying start on the Nick Moore-trained Hostwin Euphoria (Street Boss) in the Class 4 & 5 over 1200 metres. Hostwin Euphoria is a nice neat-looking three-year-old that was a $150,000 purchase at the 2018 Magic Millions Adelaide Yearling Sale.

Hostwin Euphoria was well-schooled having won barrier trials at both Rosehill and Warwick Farm prior to being sent to Macau, and judging by Saturday’s win, he is going to develop into a handy commodity that will get over more ground.

Nick Moore also provided Hamel with his second winner in Hostwin Shadow (Longhorn) in the Class 2 & 3 over 1200 metres. The grey enjoyed a cosy run off the leader Thehorseiswithme (I Am Invincible) before ripping away for an easy win. His runtime of 1:10.9 was only two ticks quicker then Hostwin Euphoria’s early win in the lower grade, which bodes well for the younger Hostwin Euphoria.

The Hostwin double continued the wonderful start for Moore to his training career, giving him five winners from only 23 runners to date. Hostwin Euphoria and Hostwin Shadow were his only runners on Saturday.

With five months of the season remaining, the jockeys’ championship is shaping up to be an intriguing battle. Henrique is in his third season in Macau and now well established with owners and trainers. Hamel only arrived for the final three months of last season, but has quickly garnered support to put himself in the top bracket in the enclave.

Chin is eyeing the four-year-old classics as a prelude to the Derby for his highly-talented galloper King Of Glamour (Eurozone), who scored a nice win in the Class 1 & 2 over 1500 metres.

Stable apprentice Eric Cheung did a fine job on the gelding, getting across from gate nine to find the rail in seventh spot after 300 metres. His mount enjoyed a nice run well off the pace before improving approaching the home turn. With a line of four battling it out at the furlong, King Of Glamour swooped on them quickly and sprinted away with a winning break.

Luen On Poseidon (Pierro), who was runner-up to Bring Me Speed (Sebring) in last year’s Macau Guineas (Listed, 1500m), was coming on strongly late under Dayversom Barros after having to squeeze through a tight gap on the rail, and ran King Of Glamour to a short head on the wire; Trillion King (Myboycharlie) was a distant third.

King Of Glamour has put together a fine record with five wins and three seconds from his nine starts. Saturday’s win came off an unlucky neck second to Oneofthegreats (Snitzel) over 1500 metres on February 22.

Cliffy Lai took the prize for the most daring ride of the day when he led most of the way on the New Zealand import Qian Gua (Cape Blanco) to win the Class 2 over 1800 metres.

Lai, who has only just returned to riding after a four-month break, drove the five-year-old out of the gates to lead the field out of the straight the first time, setting up a good tempo. On the back, the gelding was momentarily headed by The Moon’s Back (Hussonet) before Lai again upped the ante to take charge again.

Qian Gua was let loose by Lai from the 600 metres and put a gap in the field to straighten up with a six-length margin over the rest; he gave nothing a chance from there on to win easily.

Prepared in Macau by K H Leong, Qian Gua was friendless in the betting going out at more than 50-1. The victory was even more surprising given that Qian Gua had only had one run prior for a 12th of 14, beaten 16 lengths over 1050 metres on the sand.

Japanese rider Masa Tanaka is off and running in Macau with a double over the weekend to add to his breakthrough win in the enclave a fortnight back.

Tanaka again teamed up with trainer Geoff Allendorf – who provided him with his first winner Luen On Success (Lord Kanaloa) – only on this occasion it was Luen On Prosperity (Written Tycoon) in Friday night’s Class 4 & 5 over 1200 metres on the turf.

Luen On Prosperity made it win number two from his five runs to date and continued the good run of success for the Allendorf stable, and gave him win number 22 for the season. Tanaka then backed up again on Saturday to win the Class 5 & 6 over 1800 metres on the Alan Tam-prepared So Yummy (Kuroshio).

Tanaka is Macau’s newest jockey having arrived in January. He has ridden at 10 racedays to date and is now just starting to establish himself locally.

Shogo Nakano, Macau’s other Japanese rider is into his second year with the club, and the likeable jockey booted home win number six for the season with a nice ride on Ventures Elite (Battle Paint) from the Leong yard in the Class 6 over 1350 metres on Friday night.

Ventures Elite was rated perfectly on the lead by Nakano before racing well clear in the straight to defeat Numberone Mingxuan (Bullbars) and Eric Cheung, with Filial Piety (Highly Recommended) and Stephane Ladjadj in third.