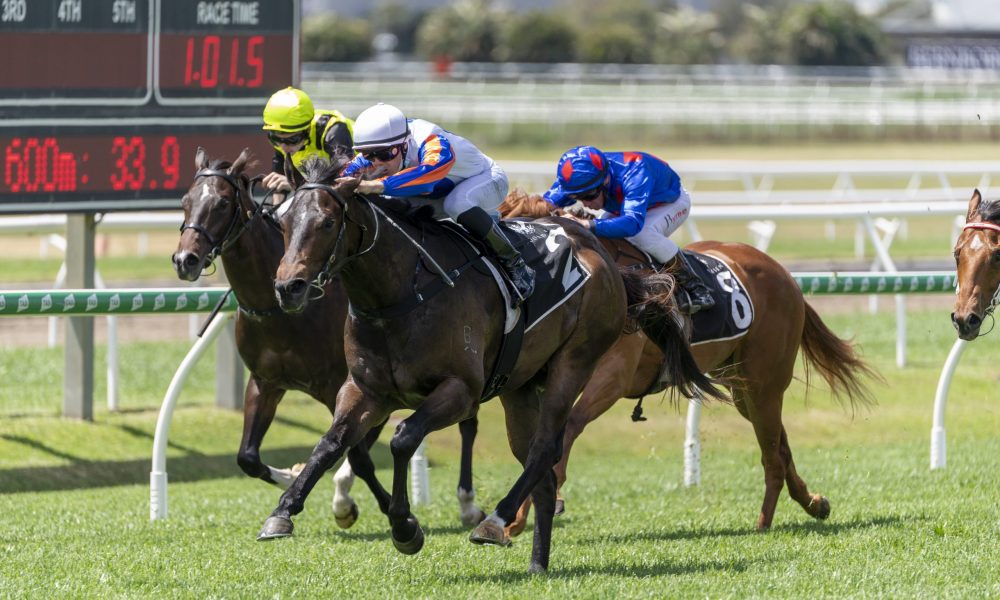 Sometimes racecourse victories mean more than others and cannot be measured simply by a race’s status or the prize-money it carried and one result in particular last weekend was an example of that for the tight-knit Nolan family and their Queensland farm Raheen Stud.

As any studmaster will attest, a first crop stallion achieving his maiden racetrack winner often comes as a relief more than anything, even for the most experienced and hardened of industry professionals, so Raheen Stud’s Basil Nolan Snr had every reason to be overjoyed by the stud’s young stallion Heroic Valour (Fastnet Rock) doing just that at Doomben about midday on Saturday.

Heroic Valour’s two-year-old son Heroic Son, trained in Brisbane by Peter and Will Hulbert, overcame a wide barrier (nine of ten) to win the Pierata at Aquis 2YO Plate (1050m) by one and a quarter lengths in a manner which demonstrated his obvious talent and ability to power away from his equally inexperienced rivals.

“It is always nice to get the first one up, I can tell you,” Nolan Snr reflected yesterday.

“There’s plenty of times when you can have them trialling well and doing something well and then they go shin sore, so it is very nice to win the first race and to win it like he did.

“It always worries you when they draw out wide over the 1050 at Doomben. It is an horrendous alley as they’re turning all the time, so for him to get outside the leader was a good effort.

Heroic Valour also had Mike Crooks’ homebred gelding Mishani Persuasion, who is trained by Les Ross, finish fifth in the race, coming from last at the 400 metres, just two and three-quarter lengths behind Heroic Son.

“The other one ran fifth and it was probably a bigger run, really, as it came to the turn and was three lengths from them and then came down the straight like a drunken sailor and flashed to the line to run the fifth,” said Nolan.

“They are the only two that have started but there has been a lot of talk about how other trainers have got them going.

“We’ve got a few (mare) bookings through trainers who have bought them and that is always a good sign.”

Raheen Stud, a farm established in 1957, has a long history of standing stallions, New Zealand Diamond Stakes (Gr 1, 1200m) winner Heroic Valour just the latest on the roster and judging by Saturday’s result he could continue the Queensland stallion resurgence in recent years through the deeds of Spirit Of Boom (Sequalo), Better Than Ready (More Than Ready) and the late Spill The Beans (Snitzel).

“Golden Archer was the last one and we also stood Dodge. We’ve always stood a stallion, put it that way, but we haven’t ever had one who has (sired the) winner of the first two-year-old race in Brisbane, though,” Nolan Snr said.

“There was a bit of cheering about the furlong pole (when Heroic Son hit the lead) and we certainly had a celebration that night. It was (grandson) Basil’s 18th birthday the next day, so it made for quite a good celebration.”

Bred by Kellie and Cameron Bond, who own a breeding right in Heroic Valour, Heroic Son was sold for $50,000 through the couple’s Kenmore Lodge draft to the Hulberts in Book 2 of the Magic Millions Gold Coast Yearling Sale in January.

He is the first foal out of Pirelli Princess (Show A Heart), a sister to the stakes-placed Show A Prince, which makes the juvenile a grandson of Listed winner Princess Margaret (Spectrum).

The McAlpines of Eureka Stud and Crooks’ Mishani Enterprises are also among the small group of shareholders in Heroic Valour, a Coolmore-bred stallion who was unbeaten at two for Te Akau trainers Stephen Autridge and Jamie Richards.

It was the Coolmore connection which led to the late Basil Nolan Jnr negotiating to buy the horse in 2018 from the Te Akau syndicate who raced the NZ$400,000 yearling.

“Coolmore had retained part of him and we did a deal after they told us about him. Basil Jnr was in the negotiations with them at a (Magic Millions) June sale when we were looking for a new sire,” he said.

“We’ve been offered heaps of horses and this fellow fitted the bill. His mother’s a pretty good mare who has thrown two Group 1 winners (Heroic Valour and Doncaster Mile winner Triple Honour) and then he is by Fastnet who is a fabulous sire and just thought he fitted the bill.”

“As you can understand, it’s always a tricky time to get mares for a horse (in their fourth season), but he’s been pretty popular all through because he throws such a good type and he’s a Group 1-winning son of Fastnet who was unbeaten as a two-year-old.

“He suits Queensland and he suits Australia, really, and he is a very fertile horse, which in this day and age is very important.”