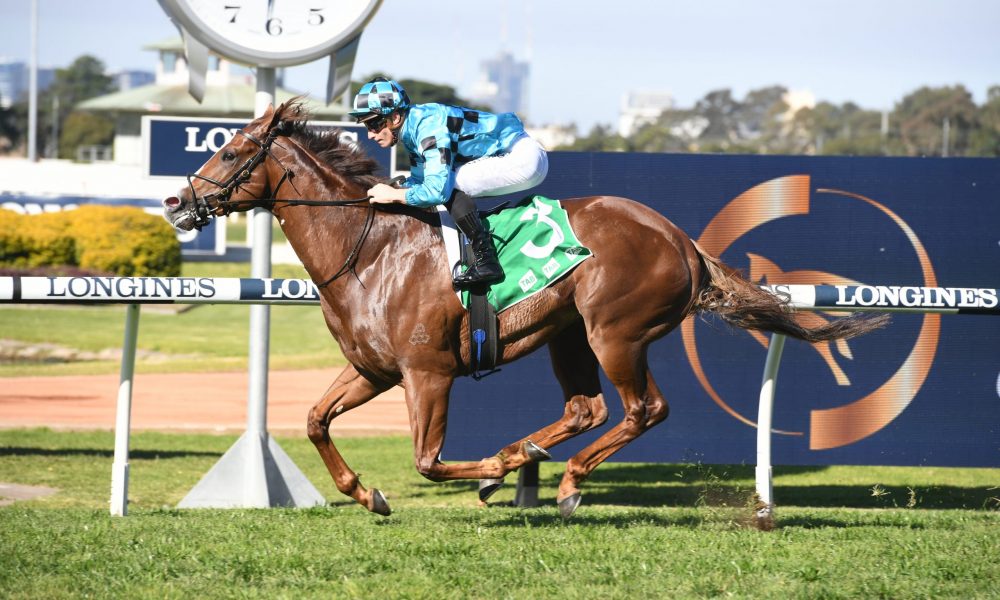 Widden Stud has secured a controlling interest in high-balling speed machine Anders (Not A Single Doubt), the short-priced favourite to add a Group 1 to his record next week, in the latest move by Aquis Farm to cash in on its plethora of stakes-winning colts.

The dominance of that performance, in which the colt showed blistering speed to lead and win by three and a quarter lengths, backed up the demolition of his rivals in The Rosebud (Listed, 1100m) first-up when scoring by four and three-quarter lengths.

Thompson last night declared that Anders’ profile was one that had served Widden Stud well for decades and was pleased to be able to partner with Aquis to stand the colt at the famous Hunter Valley farm.

“He’s a very fast horse and a lovely physical and he’s got a super pedigree and a horse we can really do a lot with. I think he’ll be a great addition and we’re really excited about him,” Thompson told ANZ Bloodstock News.

“He’s certainly done enough at this stage to earn his spot at Widden and everything’s a bonus from here, but his figures and what he’s shown so far gives us the indication that he’s pretty special.

“We’re happy to be involved with him through the rest of his racing career and then certainly his stud career. We’ve seen enough to know he’s going to be a really exciting prospect and has what it takes to be a good stallion.”

The colt’s spring campaign could culminate in the Coolmore Stud Stakes (Gr 1, 1200m) at Flemington on October 31 if he continues to maintain his stellar form which has stretched to four straight wins, two either side of a spell.

“He’s been a special colt for us from the time we saw him (as a yearling). We always thought he was top drawer and he’s proven that now,” Aquis Farm’s managing director Shane McGrath told ANZ Bloodstock News.

“He’s going to Widden and there’s no more iconic stallion farm in Australia and for Aquis and all the other owners associated with them, it’s a privilege and we’re really looking forward to the journey.”

Interest had already been shown in Anders for a slot in The Everest from multiple parties, but Aquis could hold the ace hand if connections decided the colt should take on older horses in the $15 million race at Randwick on October 17.

McGrath revealed: “Prior to negotiations with Widden and a number of other major farms, we had three independent approaches in relation to the slot.

“As it is now, it’s a job for Antony Thompson and Widden as they are the managing owners and we’ll respect their decision and I’m sure he will make the best decision not only for Anders but the entire ownership group.”

A trip overseas for the King’s Stand Stakes (Gr 1, 5f) and Diamond Jubilee Stakes (Gr 1, 6f) at Royal Ascot next year could also be on the cards if Anders’ form holds up.

“All those things are on the table. He’s effective on all sorts of ground, he’s got a very high cruising speed, so they do look like nice options for him in time, but we will work with Ciaron and David and map out a plan from there,” Thompson said.

“At this stage, we’ll look to the Moir and weigh up our options after that.”

In recent months, Aquis Farm has sold down its holding in this year’s star juvenile, the Golden Slipper Stakes (Gr 1, 1200m) winner Farnan (Not A Single Doubt), and parted with Pago Pago Stakes (Gr 3, 1200m) winner Prague (Redoute’s Choice) in another significant transaction.

Both colts, who were also part-owned by Phoenix Thoroughbreds, were purchased by Kia Ora Stud.

Aquis also has Holyfield (I Am Invincible), who won the Ming Dynasty (Gr 3, 1400m) at his most recent start, and Saturday’s Dulcify Quality (Listed, 1500m) winner Mo’unga (Savabeel) racing under its banner. Both could be headed to Group 1 three-year-old races this campaign which would further boost their appeal as stallion prospects.

When questioned as to the reasoning for Aquis’ decision to sell a controlling interest in another high-class colt – one of a number of an enviable crop selected at the 2019 yearling sales – McGrath said that it fitted owner Tony Fung’s brief.

“The whole business mantra has always been to go and select well-bred colts with the potential to be stallion prospects and we’ve been fortunate that not only have we had Farnan and Prague but Anders as well,” he said.

“The market has identified that the selection process and the systems we have in place is producing these horses. For the longevity of the market, they’ve got to be appreciative of what we’ve done and what we’re trying to do.”

Selected by McGrath and purchased in partnership with Ciaron Maher Racing for $670,000 at the Magic Millions Gold Coast Yearling Sale when offered by Arrowfield Stud, Anders is a half-brother to the stakes-placed sprinter Battleground (Snitzel).

Not A Single Doubt, who was pensioned earlier this year for health reasons, is the sire of 73 stakes winners and has three sire sons, Aquis’ Dubious, Newgate Farm’s Blue Diamond Stakes (Gr 1, 1200m) and Moir Stakes winner Extreme Choice and Squamosa who stands at Sun Stud in Victoria.