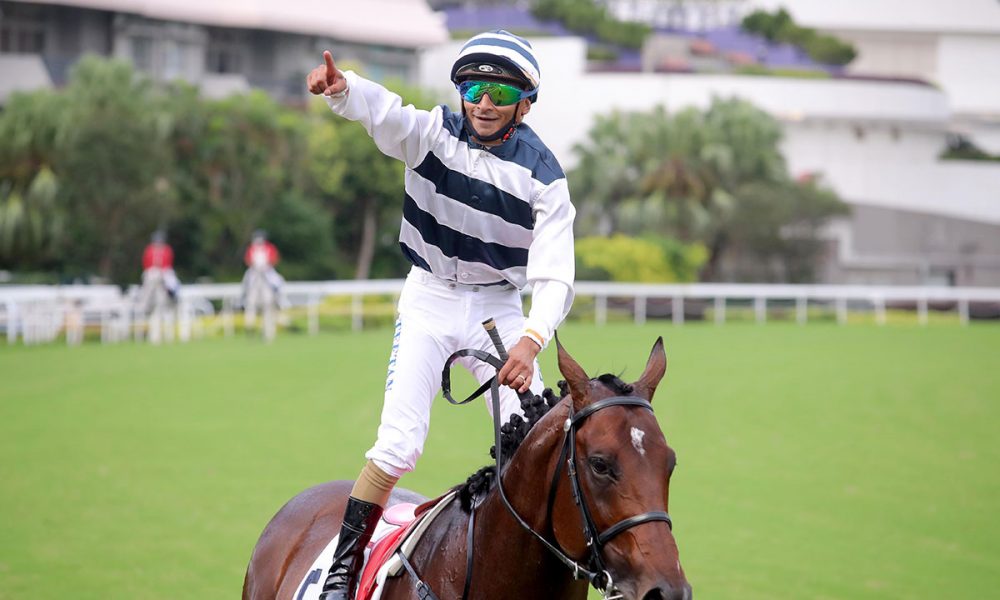 It was a case of more questions than answers after the Group 2 action at Sha Tin on Sunday. Lucky Patch’s (El Roca) win in the Premier Bowl Handicap (Gr 2, 1200m) seemed to scotch the notion that the sprint division’s elite echelon is on the cusp of reinvigoration, while the stamina-laden stallion prospect Panfield (Lookin’ At Lucky) defied a muddling pace to slap down the ‘best-of-the-rest’ milers in the Sha Tin Trophy Handicap (Gr 2, 1600m).

Lucky Patch went into the Premier Bowl under Zac Purton as a solid performer rather than a star-in-the-making, thanks to a 13-race Hong Kong career that had reached a new peak two and half weeks earlier, when runner-up in the National Day Cup (Gr 3, 1000m). The glamour contenders were, without doubt, the John Size-trained Courier Wonder (Sacred Falls), hitherto unbeaten, and the David Hayes stable’s hype horse Naboo Attack (Warhead).

Courier Wonder, if taken at face value, was only moderate in fifth, while the rail-running Naboo Attack (Warhead) was in all sorts of trouble after a sluggish start and finished ninth, beaten five-and-a-quarter lengths. So much for the young guns galloping in to save the depleted sprinting ranks.

“I think it’s really hard to get a line through the form out of that race,” Purton told Asia Bloodstock News. “The favourites were disappointing, they got stuck in positions that didn’t really suit them and then ended up on the worst part of the track.”

But Hong Kong experience teaches that it is wise to forgive – once, at least – an up-and-coming horse for what appears to be a bad run, while Purton’s allusion to the conditions on the day demand consideration.

“Not only was the inside of the track off,” Purton expanded, “but there was a really strong tailwind down the back straight as well, more so when you were coming around the corner from the 1000-metre mark to the 400-metre mark, the wind hitting the horses side-on that were on the fence, they were just getting sapped of all their energy, it was blowing a gale. The horses that were one-off the fence or three-wide were being shielded from that strong wind but were then also getting onto the better part of the track in the straight.”

The four-time champion jockey and current premiership leader has Naboo Attack – as well as Lucky Patch – on his shortlist of possible Hong Kong Sprint (Gr 1, 1200m) rides come December and he admitted to being uncertain about the strapping five-year-old’s latest performance, even with those mitigating factors.

“It’s a hard one to measure,” he said, noting that the gelding over-raced under Alexis Badel after his slow start. “He looked very plain in the straight, it was an uncharacteristic performance from him because he’s been so good in Hong Kong so far. I think we just need to put a line through the race.

“Courier Wonder’s been exceptionally good all the way through and then he looked plain yesterday as well. It just makes me question the result in that race. It wasn’t a surprise to me that we won, it was more of a surprise how some of the more fancied runners went. So, how much emphasis do you put on the track condition or did they just underperform?”

Either way, the result left Richard Gibson feeling positive about his stable star Wellington (All Too Hard). The Chairman’s Sprint Prize (Gr 1, 1200m) winner missed the Premier Bowl due to what was listed on his veterinary record at hkjc.com as lameness in his off-hind.

“When vets start talking about soft tissue damage in the Sacroiliac region, they’ve lost me,” Gibson said of the five-year-old’s setback, which kept him out of work for ten days.

In layman’s speak, that translates as being a problem around a joint in Wellington’s lower back, in the pelvic area, which affects a horse’s propulsion of power from its hind quarters.

“That seems to be the point of concern,” he said. “We’re prepping for the November race (the Jockey Club Sprint). Get him sound and we’re in good shape.”

Meanwhile, Panfield earned champion stayer honours in Hong Kong last season for his Champions & Chater Cup (Gr 1, 2400m) victory and was first-up on Sunday for a campaign which is pointing towards December and either the Hong Kong Vase (Gr 1, 2400m) or Hong Kong Cup (Gr 1, 2000m).

But, instead of running an expected promising race for a place first-up against the specialist milers, the Chilean import quickened off a slow pace to seal a win that must have given the absent Golden Sixty’s (Medaglia D’Oro) connections a nice confidence booster ahead of their all-conquering star’s return in next month’s Jockey Club Mile (Gr 2, 1600m).

“It was good to win but it does put a little bit of a spotlight on the milers. He’s not a miler but he gave them weight and still gave them a beating, so it raises a question about them,” Panfield’s trainer Tony Millard opined.

“There’s no way any of these horses should even get close to Golden Sixty. Unless the Japanese bring a horse or a European horse comes over, he’ll have the Hong Kong Mile at his mercy.”

Millard and Panfield’s owner Yue Hun Hing find themselves in the unusual position of having a smart stallion prospect on their hands. Colts and entires are few and far between around Sha Tin.

“Over the years, I think (John) Moore and (Tony) Cruz had one or two colts, and Richard Gibson had Akeed Mofeed, but the general policy nowadays seems to be to geld them as soon as they get off the float from the sales,” Millard said. “Panfield looked like he didn’t need to be gelded so I didn’t worry. He’s a very big horse and when he first came in, he’d been travelling quite a bit, so he was a little bit on the light side.”

Gibson prepared Akeed Mofeed (Dubawi) to win the Hong Kong Derby (Listed, 2000m) and Hong Kong Cup for Pan Sutong, who paid a handsome sum to prize him out of John Oxx’s stable in Ireland with a view to standing him as a stallion. Ordinarily, Hong Kong is seen as being a far from ideal home for entire horses.

“The daily practicality is a claustrophobic equine environment,” Gibson said. “It is a cliché but I genuinely mean it, that it’s to Akeed Mofeed’s credit that he could handle the environment in Hong Kong. In our daily training, horses are very close to each other a lot: walking through tight alleyways and things, it’s very different to training colts in Europe where, for a start, you have the colts’ yards and the fillies’ yards. A colt needs a lot of mental strength to handle these conditions. It is very tough and that’s why there are so few colts here.”

The Hong Kong Jockey Club’s CEO Winfried Engelbrecht-Bresges has ambitions for Hong Kong’s majors to be stallion-making races. The great Lord Kanaloa (King Kamehameha) and Shadai’s Arrowfield shuttler Maurice (Screen Hero) have come out of such races and succeeded on that score but while their Hong Kong wins did expose them to a global audience, their achievements at home in Japan were enough already to have earned stallion status, while similar can be said about the likes of Coolmore’s first season sire Highland Reel (Galileo). Hong Kong, with its proliferation of geldings, has not produced a stallion of note.

Akeed Mofeed started at his owner’s Goldin Stud – formerly Lindsay Park Stud – where from 253 foals of racing age, he produced 81 individual winners of 184 races and only two stakes winners, both at Listed level in Australia. The 12-year-old then stood at Swettenham Stud in 2019 where he covered his biggest book of 135 mares but, as if mirroring Pan’s wider business difficulties, that number dropped markedly to 34 in 2020.

Yue has no plans yet with regard to where Panfield might stand should he seal a berth at stud but the latest Hong Kong stallion prospect does have in his favour the added string to his bow of also being a triple Group 1 winner in South America. That could prove to be a viable post-racing destination, given the success of his sire Lookin’ At Lucky (Smart Strike), who shuttles between Haras Don Alberto in Chile, where he has sired multiple champions among 34 individual stakes winners, and Coolmore in the US, where he has produced 25 individual stakes winners.

“All we’re worrying about at the moment is racing,” said Millard, who along with Yue pulled the plug on a Melbourne Cup tilt due to the difficulties of Covid-affected travel for his staff and the added stringent veterinary requirements this year for overseas horses. The flirtation with an Australian campaign has raised the prospect that Panfield might yet venture overseas, and perhaps enhance his stallion potential, but again, travel restrictions would be a factor.

“We’re just all looking at the international races in December and, what happens after that, we’ll take it as it comes. It will be interesting to see who wants to come in: who’s prepared to travel to Hong Kong?” Millard added.

Whether or not those incomers find a Hong Kong team with fresh talent on an upward trajectory remains to be seen. With the weekend’s races doing nothing but muddy the waters, reputations will be on the line in November’s lead-up races when any excuses for the ‘rising stars’ would be less easy to swallow.