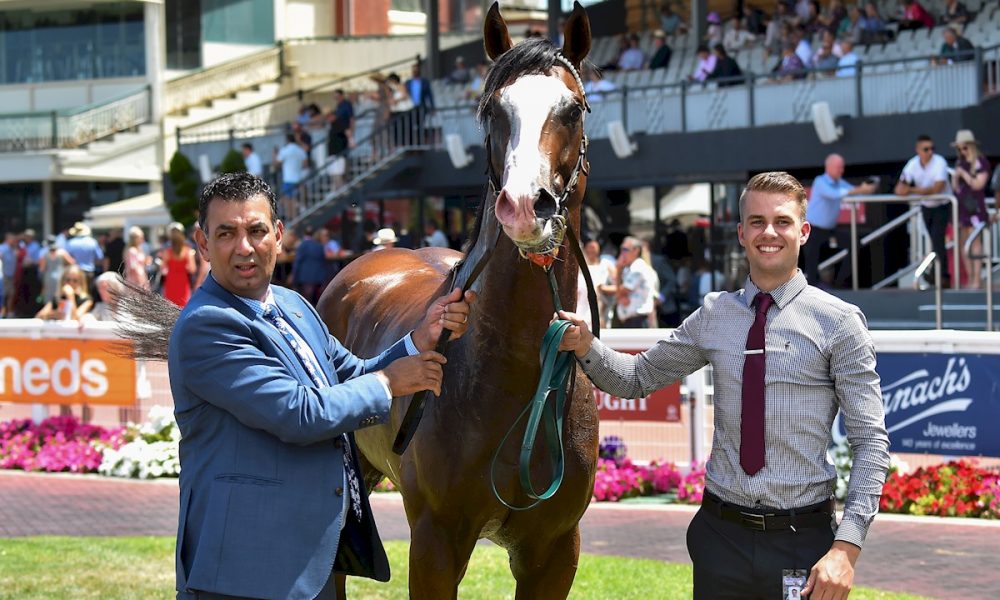 The Cranbourne training ranks have swollen in quantity and quality in the past 12 months, with the arrival of leviathan outfits and household names relocating from Caulfield.

Despite the recent influx, long standing Cranbourne horsemen Enver Jusufovic and Julius Sandhu have been the flagbearers for south-east Melbourne’s excellent training facility over the past two weeks.

While neither are yet household names or leviathan in stature, both Jusufovic, born in Footscray of Bosnian and Slovenian heritage, and Sandhu, from Bangalore in India, have been ensconced at Cranbourne since well before the moves of Maher-Eustace, Price-Kent and Grahame Begg et al, and their training talents have been handsomely advertised in the past fortnight by the unbeaten Pinstriped and Lofty Strike respectively.

Meanwhile, Robbie Griffiths – as local to the area as you can possibly be – is enjoying a resurgence in partnership with a young man from South Africa, Mathew de Kock.

Griffiths and Jusufovic have long been connected, while the latter also has some connection with the relative newcomer, kindly offering boxes to Sandhu at one stage of his fledgling training career in his adopted home. The two also excel in other sporting domains with Jusufovic a very good, if temperamental, golfer while Sandhu is more than highly proficient with billiard cue in hand.

Pinstriped’s win in last Saturday’s Group 3 C S Hayes Stakes was remarkable given his trainer’s level of metropolitan success, while it was a first stakes win for the man universally known as EJ. Even his phone message says ‘you’ve called EJ’.

This makes me laugh as I recall a mutual friend berating – in good humour – EJ for listing his website as enverjusofovic.racing. “Nobody will be able to google that. Why didn’t you go EJ Racing?,” the friend said.

“I think we’ve had to stand up,” Jusufovic says in reference to the changing face of Cranbourne, his recent success and that of Sandhu.

Other longer term tenants, including Griffiths (and de Kock) and Trent Busuttin and Natalie Young, who settled at Cranbourne in 2016, have also enjoyed good recent form.

“The competition’s pretty intense here now,” he says before adding, in typically deadpan EJ fashion, “and it’s busier. Like bloody Bourke Street but it’s all good. It’s a magnificent centre which is only going to get better, I think, with more voices and more prominent voices having their input.

“It’s an exciting time for me leading into a Group 1, as it is for Julius, who’s got some good stock and who’s doing a very good job with them.

“It’s busy but far from overcrowded,” says Griffiths, who’s spent his life in Cranbourne and surrounds.

“It’s been carefully managed. We’ve known for five years about the closure of Caulfield and some long-standing trainers here who retired were not replaced. It’s all positive. The influx of trainers brings a whole new world of growth, potential clients and opportunity.”

Griffiths, not without autumn aspirations himself as King Magnus prepares for the All-Star Mile and Halvorsen the Newmarket, jokes that Cranbourne ‘can take over the world.’

“It’s a very strong training centre now with a couple of the most powerful stables in the country and depth across the board,” he says.

“It’s great to see EJ with a good horse and Julius (Sandhu) has given his horse a really good prep and hopefully he can go close in the Diamond.”

Jusufovic pre-trains for Griffiths and de Kock and their ‘new’ stables are adjacent in what was phase one of the redeveloped training centre.

“We’re next door neighbours by design. That was the plan from the start with Cranbourne CEO Neil Bainbridge wisely allowing us ownership of the design of the stables,” Griffiths says.

Pinstriped’s success has been timely after a difficult 12 months for Jusufovic with on-going staff issues, a problem common to many smaller stables, and the loss of several promising horses. Stakes-performed mare Miss Albania and promising filly Jenniferenti have been taken from his care to other trainers.

Worse were the deaths of Leilani Final winner Lindhout and promising gelding Roebling.

Jusufovic says: “I lost them in the space of a week. Lindhout developed colic and then septicemia after a wind op. I thought she was a Group 3 horse. She had an amazing will to win. Roebling had a paddock accident. Something penetrated the hoof and coffin joints. It was quite sinister.”

The difficulties of attracting staff to a smaller operation exacerbated by Covid-enforced absenteeism, and no international arrivals of potential workers, have also presented challenges.

“Last Wednesday, for example, I had 28 horses to work, including some pre-trainers for Robbie and Mat with just me, two other staff and one track rider. We finished at 11.30. We’re under a fair bit of pressure most of the time but the horses still get maximum attention,” he says.

It’s that pressure, he says, which has adversely affected his golf when I ask if the description of him as ‘temperamental’ on the golf course was fair?

“Only of late,” he concedes. “I’ve walked off a few times recently. Probably only managed nine holes in my last five rounds. With the pressure we’re under I probably just haven’t been in the right space for it (golf).”

The pressure valve had only a very slight release after last Saturday’s win.

He continues: “I was relieved but very tired. Think I had half a glass of beer after the presentation, went home and had a couple of fried eggs and a glass of milk before an early bedtime.”

You fancy it might be a touch more exuberant should Pinstriped claim the Guineas.

Jusufovic acknowledges it’s some challenge for his horse to progress from a debut, heavy track Moe maiden win to Group 1 success at just his fourth start but remains optimistic after the Street Boss gelding resolutely overhauled the Busuttin and Young-trained front-runner Pascero last Saturday with the Snowden’s Caulfield Guineas runner-up Captivant and Pascero’s stablemate Forgot You closing late to finish third and fourth respectively.

“He’s done everything right and he came through Saturday’s race very well. Captivant and Forgot You will meet him better at the weights but, in my view, weights don’t mean everything. You’d be more concerned that a horse like Captivant is peaking on (Australian) Guineas day but hopefully we’re doing the same,” he says.

Jusufovic had not laid a hand on a horse before beginning his racing journey with fellow Cranbourne trainer Greg Eurell. Some years later, it was exactly the same story when now leading West Australian trainer Simon Miller approached Griffiths.

Griffiths, too, has had some challenges especially after surgery for a brain aneurysm in 2019.

“The business took a hit after that. We had plenty of loyal clients but obviously some investors are likely to be timid if the boss is out of action but we’ve been reinvigorated on many fronts, not the least of which was Mathew (de Kock) coming on board,” he says.

“Clients are now keen to invest in the future we’re building together. Three years of good buying – we’re only one down with Mat on board – will have us very excited about our niche in the market place and we’ve got a really good cross section of two-year-olds this year who can provide a platform for future success.”

They include last Saturday’s debut winner Fission and last-start Moonee Valley winner Berry Bubbly along with Yaki Ishi, a colt by Maurice and half brother to Griffiths’ ill-fated 2015 Blue Diamond Preview winner Burnstone, who debuts at Pakenham on Thursday night.

Sandhu followed his brother, who incidentally went to school with Hong Kong trainer Caspar Fownes, into racing and learned his craft with legendary Indian trainer Aris David before moving on to Dubai with Kiaran McLaughlin and working with Mick Kent when he first arrived at Cranbourne.

Jusufovic and Sandhu probably remain Cranbourne’s best-kept secret with betting markets still largely not reacting to the quality of their horses or their capability. That will change soon enough, I suspect.

Pinstriped was a ‘silly’ $5.50 last Saturday after a herculean lead-up win at Moonee Valley. Lofty Strike is a similar quote to win the Blue Diamond after winning the Prelude at $10.

“He’d be 6-4 favourite for the Diamond if he were trained by Godolphin or us or one of the other big stables,” rival trainer Wayne Hawkes said last week. Not to jinx Julius, I trust.

Sandhu has won three races, at good odds, with promising stayer The Awesome Son who was winless in campaigns for Chris Waller and Annabel Neasham. With the backing of owner Paul Lofitis, he is beginning to make quite an impact.

I think he knows how to get a quid. He certainly knows his angles.

“I got to a reasonably good level, won a few state championships,” he told Matt Stewart and I in a recent radio interview in reference to his snooker and billiards skills.

He proceeded to tell the story of winning two or three competitions, each worth $700 in the space of a few weeks, in a Box Hill pool hall soon after arriving in Melbourne.

“That was until it was made quite clear I wasn’t particularly welcome to come back,” he said.

Sandhu is hopeful Lofty Strike won’t be snookered by drawing 13 in Saturday’s Diamond.

“The barrier draw is the barrier draw and we’ll deal with it and I’ll back (jockey) Jamie (Mott) in. Hopefully he can get a similar run to the Prelude, although he may have to get rolling sooner given the bigger field and be there to accelerate from the 400 (metres),” he says.

“He’s a big-striding horse so drawing out is probably better than drawing one or two. He’ll lap up the 1200 (metres), he’s mentally strong and his will to win is probably his greatest asset.”

Perhaps those prickly pool players can get their money back this weekend?