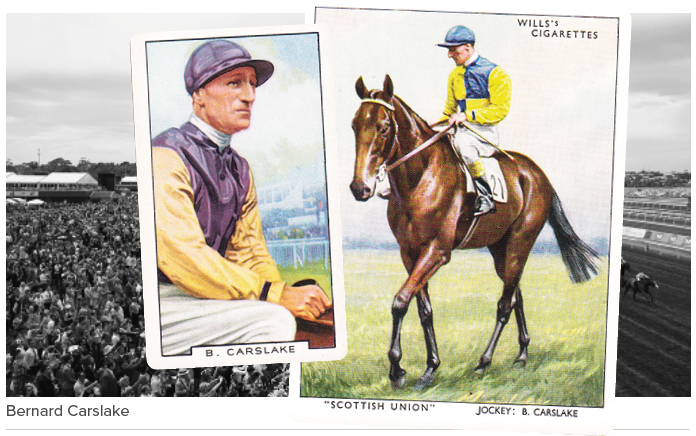 ANZ Bloodstock News’ ongoing research reveals the impact of the group we’ve dubbed ‘The Incomparables’ was even greater than first thought.

This remarkable group of Australian jockeys travelled to the British Isles and Europe through the 20th century and amassed a huge tally of Classic and major race wins – especially through to the 1970s.

While the focus is very much on those who excelled up to that time, the subsequent deeds of the much-underrated Gary Moore, our adopted Brent Thomson and the ever-underestimated Kerrin McEvoy should not be discounted.

Interestingly, it all began with Frank Bullock winning the Dewhurst Stakes in 1904 and, exactly 100 years later, McEvoy ventured to England – promptly won the St Leger, which was among seven wins in races which now have Group 1 status in England and France; notched a Royal Ascot treble and twice won the Grosser Preis Von Baden in Germany.

That’s a race also on Thomson’s CV, along with the Ascot Gold Cup and Haydock Sprint Cup plus the St James’s Palace, Golden Jubilee, Nunthorpe and Queen Elizabeth II Stakes.

Moore complemented his 1981 Prix de l’Arc de Triomphe win with Group 1 success in England in the 1000 Guineas and Cheveley Park Stakes plus nine other Group 1 wins in France, as well as the Italian 1000 and 2000 Guineas and Oaks treble in 1990.

In all, I have 36 individual Australian jockeys winning 239 races of current Group 1 status in England, Ireland and France since Bullock’s breakthrough. You can add 12 German and Italian Classics and even this list may not be finite given the lack of historical records for many races.

This tally includes often forgotten Group 1 cameos from Paul Jarman, Alan Simpson and Ron Quinton who each won the Irish St Leger, along with Russ Maddock who twice won Group 1 races in England.

However, it’s the band of men who rode for kings, queens, chancellors and maharajahs before the era of mobile phones and laptops who carry the incomparable tag.

These intrepid men who (generally) travelled by sea; who fought in wars; who escaped same in perilous circumstances; one of whom was interned in German and Italian prison camps; another who was incarcerated in peace time and one who was killed on the track (more on that when we continue our series of individual profiles).

A recap of the success of The Incomparables is in order.

They won very nearly all of the staggering 110 Classic races in England, Ireland and France (including 53 in England alone) claimed by Australian jockeys.

They won the Prix de l’Arc de Triomphe 11 times (Moore made it 12); the Epsom Derby eight times; seven Ascot Gold Cups (Thomson made it eight in total); and the Sussex, Middle Park and Dewhurst Stakes on ten or more occasions.

Six of them were named in the Racing Post’s list of the top 50 jockeys of last century. They were Frank Bullock, Frank Wootton, Bernard “Brownie” Carslake, Edgar Britt, Scobie  Breasley and Bill Williamson (all British and Irish jockeys were considered for the list plus foreign jockeys, provided they were based there for at least five years).

Many made an immediate impact. Ron Hutchinson and Billy Pyers each won the 2000 Guineas at their first rides in England. George Moore, Wally Sibritt, Russ Maddock and Billy Cook did likewise although not in a classic race.

The Incomparables list demands the inclusion of those jockeys who won either the Epsom Derby or the Arc, probably still regarded as the two most important races in the world and they were certainly so tagged during most of the last century, and those who won multiple classics in England, Ireland and France.

Rae “Togo” Johnstone (the subject of our next profile) is entitled to first mention given his 29 Classic wins (some sources say 30 but I believe it to be 29) and two victories in the Prix de l’Arc de Triomphe. Johnstone rode 48 Group 1 winners in England, Ireland and France.

In all, I fancy the group’s record is unrivalled. True, New Zealand jockeys have done exceptionally well in Australia; Brazil has exported champions Joao Moreira, Silvestre de Sousa and Jorge Ricardo; South Africans have fared very well around the modern racing world and Latin and South American jockeys have excelled in North America.

However, most of the aforementioned Australians were household names in a time when racing was a household sport; travelled farther when travel was cumbersome and went to the then-mecca of horse racing.

They were every bit as successful as Australia’s legendary cricketers and tennis players through an era when the racing world was arguably broader than the sporting world.

Australian jockeys won the Derby eight times between 1948 and 1967 and the Prix de l’Arc de Triomphe on the same number of occasions from 1945 to 1969 (another was added in 1981, courtesy of Gary Moore, while Bullock – twice – and Sibritt had earlier won France’s greatest race).

Those successful in that span from 1948 were Johnstone (5 wins in the two races); Breasley (3); Williamson, Moore and Glennon (2) along with Pyers and Sellwood with one apiece.

We’ve covered, individually, in this series the remarkable deeds of Wootton, Carslake and Bullock. From next week we’ll begin a focus on the following legendary figures:

Bill Williamson – despite a career interrupted by WWII military service, he was described by Lester Piggott as “the best big-race jockey in the world”.

Rae “Togo” Johnstone – the most successful in terms of Classic and major race wins after a shaky career start with multiple bans from riding and a more than colourful life which purportedly included escape from Italian and German prison camps.

George Thomas Donald Moore – champion jockey and trainer who was named the BBC’s “Overseas Sports Person of the Year” in 1967.

William “Billy” Pyers – jailed after a car accident in France, he rode the great Dahlia. “I never had a better jockey than Billy Pyers,” said trainer Colin Hayes.

Pat Glennon – champion jockey in Ireland but best known for his partnership with Derby and Arc winner Sea Bird who won seven of his eight starts. Glennon was aboard in the seven wins but not when he was once beaten.

Neville Sellwood – won the Derby in 1962 before being killed, a few months later, in a race fall at Maisons-Laffitte.

Garnie Bougoure – trail-blazed around the world and arguably, and unfairly, the least heralded of this illustrious group.

Ron Hutchinson – arguably robbed of a Derby win (which went to his great mate Breasley) but enjoyed great success in England and Ireland.

Edgar Britt – dominated the racing world in India and elsewhere. Lived to 103 and was awarded the Medal of the Order of Australia.

Add the little-known Wally Sibritt and the three-time Melbourne Cup winner Jack Purtell, who was successful in his international cameos, and you have The Incomparables.