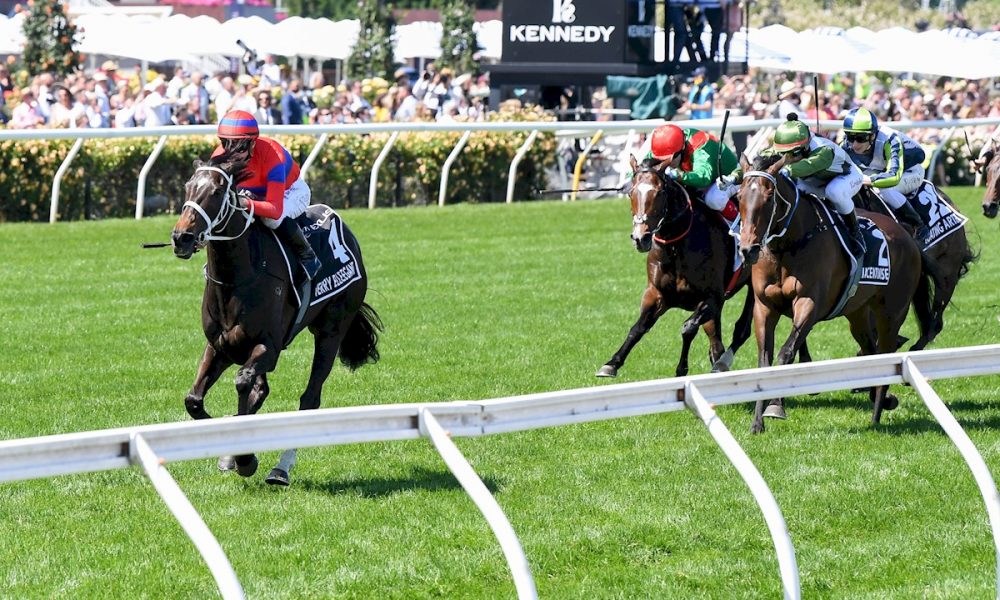 Dare we say Australasian bred? I think not. Verry Elleegant (Zed) is a product of New Zealand.

The fourth NZ-bred winner since 2000. Remarkably, given the overall dominance of northern hemisphere-trained horses and the harbingers of antipodean breeding doom, that’s more individual winners than any other country has produced in that time.

Verry Elleegant won her tenth Group 1 which have now ranged from 1400 to 3200 metres and added the famous Cup to her Caulfield Cup success last year but, more importantly, elevated herself to eminently memorable, if not champion, status.

She’s now been propelled from the tag of very good racehorse of her time to one whose deeds will be recalled for all time.

She won with the near top weight of 57 kilograms in a race where the class rose to the top and in a race which should not be considered greatly inferior to those of recent years.

The Cup is no longer a race for the longshots. Verry Elleegant beat the freakishly talented Incentivise and a quality European staying horse Spanish Mission. Each shared the second top weight of 57 kilograms and absolutely gapped all their rivals bar Floating Artist.

Covid-19 travel complications and stringent veterinary protocols were not enough, in my view, to condemn this race and Melbourne’s spring carnival to demise.

In fact, I’d argue, it was quite the contrary.

The Irish claimed the Cox Plate with State Of Rest – by Australian stallion Starspangledbanner – and yesterday’s three visitors, debuting in Australia, was precisely the right number to test the ten Australasian-bred runners headed by Incentivise and Verry Elleegant.

They were also the right ilk of horse – the defending champion Twilight Payment, the proven Spanish Mission – rather than the unexposed horse looking to beat the handicapper – and the three-year-old Sir Lucan.

One swallow doth not make the summer but an Australian-bred and Australian-trained quinella offers some hope – along with the events of last Saturday; the stunning Derby win of Hitotsu and the Golden Eagle win of I’m Thunderstruck.

Northern hemisphere-bred and trained horses have nine Cup wins since Vintage Crop turned up in 1993 but, hey, now “we” have two of the past three.

We needed a fillip after the visitors filled the first three placings last year and in 2017 and 2018 and finished second, third and fourth – each within a half-length of the local winner Vow And Declare – in 2019.

Back in 1993 there were just two overseas-trained runners in the Melbourne Cup, and just four – two of which were trained by Dermot Weld – the following year.

I’m sure that’s the way it was supposed to be.

And it is hard to imagine any horse from England or Ireland, accurately handicapped, who would’ve overturned Verry Elleegant yesterday, given the dominant manner of her win.

And while debate has raged over the merit of this year’s Cox Plate, it proved a spectacularly exciting race and one from which the form – in my opinion – will absolutely stand-up.

One progressive visitor State Of Rest and one high-class local three-year-old Anamoe were key ingredients to a dynamic race and I’ll be shocked if both do not reach greater heights, assuming they continue to race.

State Of Rest has a dynamic turn of foot and was carefully moulded to progress to middle distances at which he’s now unbeaten.

Consider, too, that he conceded seven kilograms to Anamoe on the basis that he’s circa six months older than the southern hemisphere three-year-old. However, he received just 1 kilogram from the local four-year-olds who are only six months older.

With that in mind, the northern hemisphere three-year-olds are almost certainly beating the handicapper with 52 kilograms or less in the Melbourne Cup.

Not that it mattered yesterday with Sir Lucan. But it is a dangerous game, I think, to allow these horses to qualify with a Group 3 placing against their own age whereas a 2500 metres open Quality Handicap win at Flemington does not qualify the locally-trained Tooradin.

I digress. Sure, State Of Rest was astutely placed here to avoid the best of Europe’s middle distance horses but he is untapped.

Lys Gracieux similarly dodged the likes of Almond Eye when she came here to win the 2019 Cox Plate but then returned to Japan to win the Group 1 Arima Kinen by five lengths with Almond Eye among those in her wake. It will be no shock if State Of Rest returns to Europe and is similarly successful.

As to Anamoe, the subsequent record of recent three-year-olds who perform exceptionally well in a Cox Plate is palpably good via Shamus Award and the champions So You Think and Octagonal.

The most recent three-year-old to run second in a Cox Plate and continue racing was All Too Hard who, the following autumn, claimed the Group 1 treble of the Orr, Futurity and All-Aged Stakes.

This spring has also given us another potentially outstanding three-year-old in Profondo.

We have a good deal to look forward to next autumn.