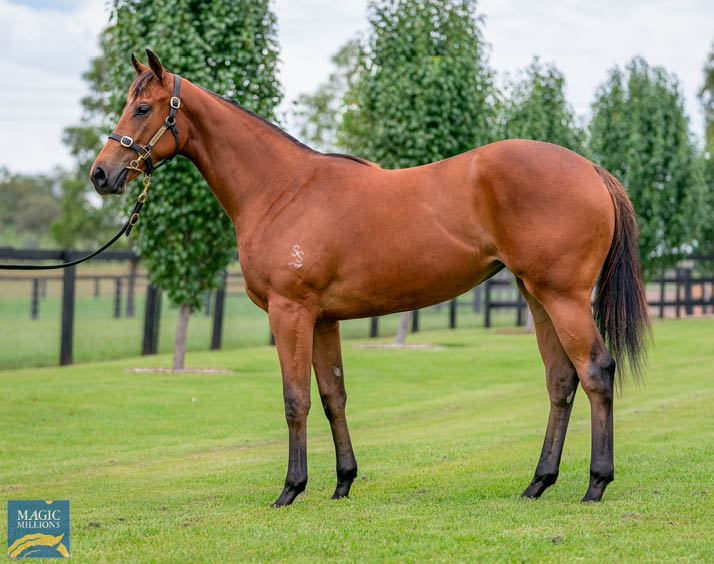 2 f I Am Invincible – Eloping by Choisir

The James Cummings-trained In Secret (I Am Invincible) put in an eye-catching performance on debut when she won the maiden plate over 1100 metres at Hawkesbury on Wednesday.

Slowly away from the gates, the two-year-old was then settled towards the rear of the nine-runner field by James McDonald before finding a gap nearly 200 metres from home.

Drawing away inside the final 100 metres, the filly scored by one and a quarter lengths over Deep Expectation (Deep Field) with a further one and three-quarter lengths back to Sweet Mercy (Capitalist) in third.

In Secret was a $900,000 purchase for Godolphin at last year’s Magic Millions Gold Coast Yearling Sale out of Segenhoe Stud, who bred the filly in conjunction with Michael Christian’s Longwood Thoroughbred Farm.

One of two winners out of the Group 3-winning Choisir (Danehill Dancer) mare Eloping, In Secret is a half-sister to Goulburn winner King Of Hearts (Sebring).

Eloping is herself a three-quarter sister to Group 3 scorer Of The Brave (Starspangledbanner), and last year the mare produced a filly by Snitzel (Redoute’s Choice) while most recently she was covered once again by Yarraman Park-based sire I Am Invincible (Invincible Spirit).