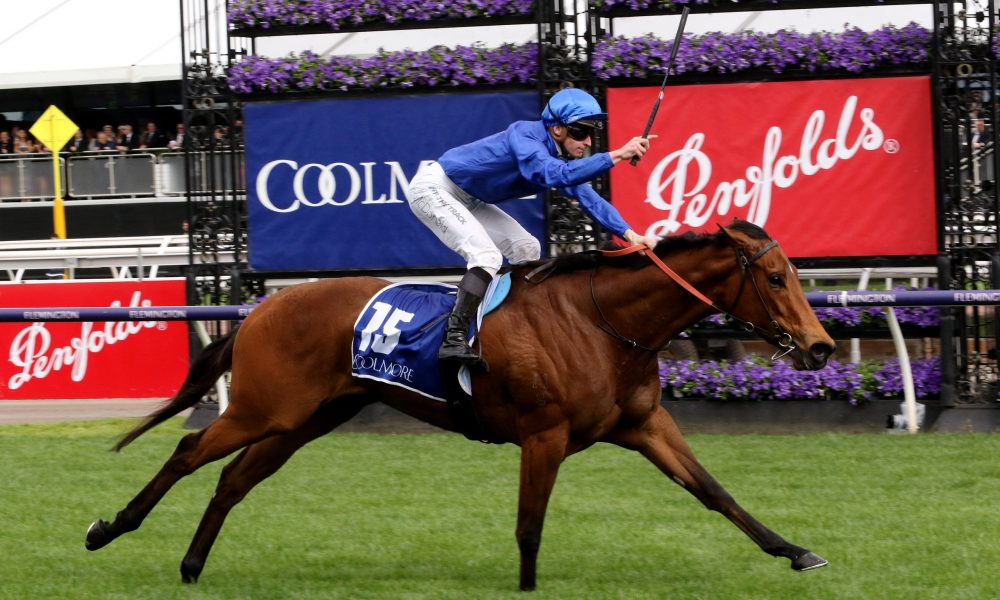 As an AFL footballer, he was a member of the Collingwood side that in 1990 finally ended the giant club’s long wait for a premiership, one prolonged through 32 years and countless heartbreaks – even a drawn grand final and lost replay in 1977.

After branching into breeding horses almost two decades ago, he’d begun to wonder if he’d ever claim a Group 1 success.

“We’d bred some really nice horses, but we’d had 11 Group 1 placings without winning one,” Christian tells It’s In The Blood. “We’d come really close, but you start to think, ‘Maybe it’s just not meant to be’.”

But for Christian and wife Siobhan, the wait has been finally ended – in some emphatic style. Like the proverbial public bus, they waited 15 years for one to turn up, and now two have come along in eight days.

First Bella Nippotina (Pride Of Dubai) put behind her a string of top-level near misses – three placings and three fifths – with her storming victory in the Manikato Stakes (Gr 1, 2040m) on Cox Plate day.

Then In Secret (I Am Invincible), a filly who’s not had to do a lot of waiting herself, brained the opposition in the Coolmore Stud Stakes (Gr 1, 1200m) on Derby Day at Flemington, taking a Group 1 at her sixth start after being nosed out of the Golden Rose (Gr 1, 1400m) in her fifth.

After Christian earned a Diploma of Horse Breeding in 2003, he and Siobhan launched their own operation in 2007 with a 40-acre farm at Whittlesea, just north of Melbourne. They expanded north in 2018 to the heart of Victorian breeding country, near Euroa, teaming with Christian’s brother Brad and his wife Pauline to buy the 500-acre Longwood. It now offers a full breeding and sales service, and is in the midst of foaling down around 110 mares.

With his breeding operation named Saconi Thoroughbreds after his and Siobhan’s first four children – Sasha, Saskia, Coco and Nicky (youngest Max was just a little too late to the party) – Christian has lived and felt a different sporting emotion than that from his glittering 131-game career with Collingwood.

“When you’re playing footy, you feel like you’re in the moment and you’re focused on what your role is. You’re not watching from the outside, you’re on the inside, so you do have a measure of control,” he said.

“But with racing and breeding, it’s different in that you don’t have any control. You build these scenarios up in your head, and you’ve got time to think about them – and stress about them! ‘What if this happens?’ ‘What if that happens?’”

Bella Nipotina’s ascension to Group 1-winner felt particularly cruel and unusual. Aside from all those near misses, she was primed and fancied for the Manikato on Cox Plate eve, before all of its storm-related dramas: put back an hour, finally given the go-ahead, then – with the horses on the track – called off again after a lightning strike, and rescheduled as the last race on Cox Plate Day.

“With all that anticipation, and hoping this would finally be her race, by the time we got home on the Friday night I was emotionally drained,” Christian says. “It actually felt like playing a drawn footy game. You felt like you’d half-lost.

“Then, on the Saturday, you have to wait until race 11 to see her run. Then (jockey) Craig Williams told us near the fence was off and he’d want to avoid it, and of course she was drawn in gate one. But in the end, she kicked up along the inside and bolted in.

“And then to have In Secret come along and win another Group 1 just a week later, it’s pretty surreal,” says Christian, who bred the star Godolphin filly with half-owners Segenhoe Stud.

“I won’t say winning a grand final or a Group 1 is better than the other. They’re different feelings, but both fantastic.”

The Bella Nipotina story started for Christian when he and trainer Peter Morgan bought a Beautiful Crown (Chief’s Crown) filly from a Rory’s Jester (Crown Jester) mare for $190,000 at the Magic Millions Gold Coast sale of 2004. Bella Inez, a full sister to Caulfield Guineas winner In Top Swing, debuted with a fourth at Flemington, but was part of the controversial 2005 Blue Diamond Preview (Gr 3, 1000m) that was declared a no-race.

Caught up in the barrier stall malfunction at the root of the episode, Bella Inez damaged a knee and never raced again, but after Christian bought out his co-owners, she would start a rich Saconi-bred family. First arrival was the Starcraft filly Hallowell Belle, whose two black–type wins included the VRC Gilgai Stakes (Gr 2, 1200m) of 2012. Second out came Fuddle Dee Duddle (Red Ransom), who took a Group 3 in Perth, while her fourth foal was Bella Orfana (Star Witness) – named from the Italian for “orphan”, since Bella Inez died four months after her birth.

Bella Orfana was unplaced from six runs, but for a first mating Christan sent her to Pride Of Dubai (Street Cry), and the result was Bella Nipotina. With the Christian brothers retaining 50 per cent, the big-hearted sprinter has now reaped $3.2 million and the breakthrough Group 1, so important to Saconi and Longwood – and the potential of another this Saturday in Flemington’s Darley Champions Sprint (Gr 1, 1200m).

In 2006, Christian went back a favourite well, paying $10,000 for another Rory’s Jester mare, Runaway Jesse. She’d raced twice in South Australia, ignominiously, but Christian was “a big fan of the speed element of Rory’s Jester”. The move proved astute, with another family begun.

She was sent to Choisir (Danehill Dancer)  for three of her first four matings, and over time this Rory’s Jester nick has emerged as Choisir’s equal second-best, with 22 winners from 28 runners, three at stakes level. Runaway Jesse’s first foal, Jesse’s Girl, was thrice Group placed – at Eagle Farm, Moonee Valley and Caulfield. But her four-year-younger full sister would eclipse her.

The filly went through the 2013 Magic Millions Gold Coast sale for $120,000, the Christians stayed in for half, and racing as Eloping, she became an outstanding talent. Under Morgan, she won Bendigo’s VOBIS Gold Rush (1000m), Randwick’s Keith Mackay (Gr 3, 1200m), the Champagne Stakes (Gr 3, 1200m) at Moonee Valley, and Caulfield’s Blue Sapphire Stakes (Listed, 1200m).

Aside from that, Eloping ran seventh in Mossfun’s 2014 Golden Slipper (Gr 1, 1200m) and sixth in Brazen Beau’s Coolmore Stud Stakes the following spring. Meanwhile, another Saconi-bred throw of Runaway Jesse – Of The Brave (Starspangledbanner) – won at Group 3 and Listed level at Caulfield.

But though Eloping claimed the Silk Stocking (Listed, 1300m) on the Gold Coast after Segenhoe bought into her, for a fifth stakes win, that Group 1 triumph would elude her.

Sent to stud, however, after a first mating with Sebring produced King Of Hearts – a $160,000 yearling who’s won one from 15 to age five – Eloping’s second foal was a filly by I Am Invincible (Invincible Spirit), pairing a sire and dam trained by Morgan. She looked something special from very early on.

In Secret so turned heads at the 2021 Magic Millions Gold Coast sale, she outstripped her younger half-brother’s price several times, and was sold to Godolphin for $900,000.

“When you’ve got a five-time stakes-winning mare like Eloping, we want to match that sort of commerciality with a similarly commercial stallion,” Christian says. “That breaks it down to only a handful of stallions, and then we’d want to make sure the physical type matched up, and of course the breeding.

“And it certainly worked in this case. A lot of people told me she was the best I Am Invincible at the sale, so I thought half a million would’ve been good. So, to get $900,000 was pretty special – though it turns out it’s a very cheap price, in hindsight.”

The mating which produced In Secret tapped a particularly potent cross. I Am Invincible over Choisir mares has brought three stakes-winners. That’s his equal-second best – five behind his runaway nick, Encosta De Lago – but what it does boast, unique among his top 11, is a 100 per cent record, with 11 winners from 11 runners.

It also enacted an intricate blend of three key stallions doubled-up in the pedigree – in fact the only duplications in her first five generations. She has Danzig (Northern Dancer) in a 4Sx5D cross, Lunchtime (Silly Season) at 4Dx5S, and Sharpen Up (Atan) at 5Sx5D.

Readers of this column may recall the duplication of those three has been proven before, including in the pedigree of the stakes-winning Semillion (Shalaa). It would take another column, but the essence lies in the fact it’s a complementing blend of three stallions who are members of Lowe’s family No.7, with the trio having a key common ancestor in Pyrrha, a mare born in England in 1771.

While Semillion won two stakes races as a two-year-old, it appears that for former footballer Christian, it has kicked a far more spectacular goal with In Secret.