“It was a great result for the stallion and Cambridge Stud” 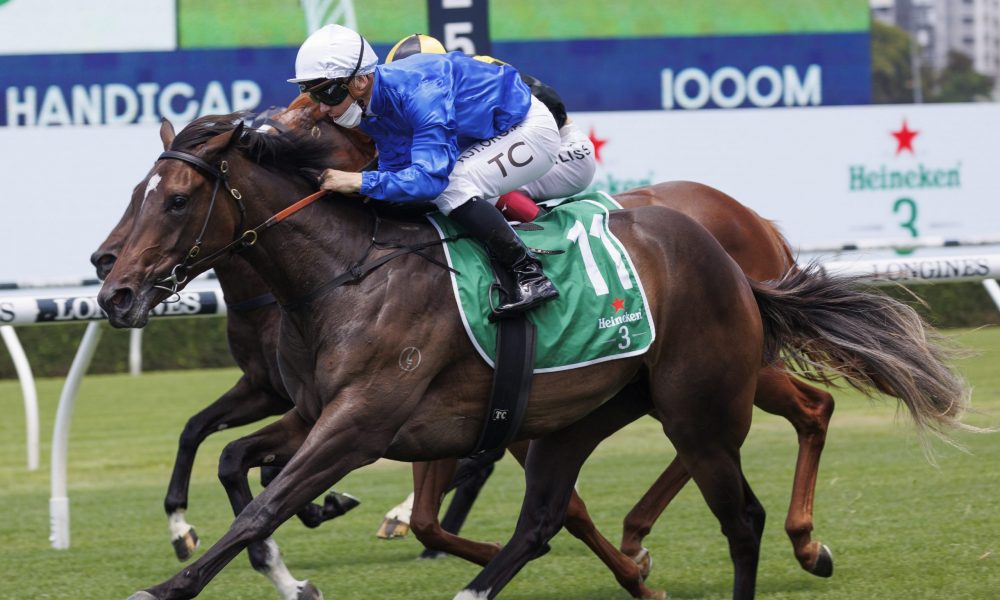 During his time in the northern hemisphere, Almanzor (Wootton Bassett) calls Haras D’Etreham in Normandy home and Nicolas De Chambure – executive director of the French nursery – was delighted with Dynastic’s win in the Karaka Million 2YO yesterday, believing it to be just reward for Cambridge Stud owners Brendan and Jo Lindsay’s heavy investment and support of the stallion.

“It was a great result for the stallion and it is all thanks to the work they have done at Cambridge to promote Almanzor in his first season in New Zealand. I was talking to Brendan (Lindsay) earlier and it is such a thrill for them,” De Chambure told ANZ Bloodstock News.

“They did the hard work and made a big investment buying into the stallion, bringing the horse to New Zealand, getting the support from breeders and getting the first win in the Karaka Million – it’s a great result for them.”

Almanzor’s first crop of runners in the northern hemisphere yielded ten winners, including two stakes performers in Saving Grace and Queen Trezy and De Chambure is expecting the stallion’s progeny to only improve as three-year-olds.

“I think, just as they will be in Europe, his progeny will be three-year-olds. They have plenty of size and substance and have great minds, but they take a little time, so for this colt to do that this early on in his career probably means he is a proper colt and you can only think we will be even better later on in the year and next year,” De Chambure continued.

In a industry flooded with Danehill (Danzig) blood, three-time Group 1 winner Almanzor looked to have the perfect profile to succeed in the southern hemisphere, being a champion on the racecourse and being from a Danehill-free Iffraaj (Zafonic) line, which has already proven to be a success in Australasia.

However, shuttling a stallion can prove a tricky business, no matter how perfectly a stud believes they can fit into the breeding landscape. But breeders threw their support behind Cambridge’s new recruit in his first year and they were well rewarded at the sales last year, with the stallion selling 42 yearlings – including Dynastic himself – at Book 1 of the New Zealand Karaka Yearling Sale at a sale-leading aggregate of NZ$8,130,000 and an average of NZ$193,571.

The stallion’s first-crop were equally well received at the yearling sales in Australia in 2021 with 15 youngsters selling for an aggregate of $3,980,000, headed by a $800,000 colt, while he finished the Australian sales season with a healthy average of $265,333.

While De Chambure expected Almanzor’s first-crop of yearlings to be well-received in Australia and New Zealand, he did admit to being surprised at how well they performed in the sales ring last year.

“Cambridge felt that the stallion was going to suit their market really well. Obviously he is an outcross, which is a huge plus. When he raced he showed a great turn of foot and won three races as a two-year-old and was a Classic winner at three, so he had a great profile for them,” he said.

“But I think everyone was surprised at how well he was received at the yearling sale, especially in Australia, but he throws such a good-looking type. I also think the yearling buyers in Australia realise now how much prize-money they have over a mile plus and for the later type as well, which helped a stallion like Almanzor.

“It is obviously a risk to shuttle a horse, but he has a great mind and he is a gentleman to deal with so he is coping with the trips very well. We limited him to 140 mares in both his books, which of course helps as well and we hope he can be a success in both hemispheres and be a sort of More Than Ready and keep travelling and be healthy and safe.

“I am just so delighted for Cambridge that he looks like he is on his way to making it down in New Zealand. It was a great result.”

Almanzor is currently covering his fifth book of mares in France at a fee of €30,000 (approx. AU$47,370) and De Chambure said the breeders have continued to support the stallion off the back of his good results last season.

“He is almost full in Europe and the trainers up here are so enthusiastic about his progeny that the breeders have a lot of faith in him and they are continuing to support him here,” he said.

Final salute to Pins in Karaka Million 3YO

One of New Zealand’s finest stallions of recent times, late Waikato Stud resident Pins (Snippets), recorded a fitting victory at his final chance to be represented among New Zealand’s richest races when the Richards-trained Pin Me Up (3 f ex Brampton Loco by O’Reilly) scored an upset win in the Karaka Million 3YO (RL, 1600m) to close out the meeting.

Pins died in March, 2018, months after serving his 18th book of mares. His final crop was a smaller group of foals too as the infirmities of old age caught up with him, with only 45 foals recorded and 17 so far having raced.

Following yesterday’s win, Pin Me Up – a $270,000 purchase from the 2020 New Zealand Bloodstock Karaka Yearling Sale by bloodstock agent Andy Williams and Australian owner Peter Collier – has become the pin-up girl of that last crop as the first stakes winner of the group, having won once in maiden company from four previous starts.

Ridden by Sam Weatherley, Pin Me Up settled beyond midfield as a hot speed developed up front, forced by Opie Bosson pushing forward three-deep on $1.50 favourite and last year’s Karaka Million 2YO winner On The Bubbles.

The field was well strung out by halfway and On The Bubbles kept forcing the pace, causing racecaller George Simon to quip, “On The Bubbles is going to have to be vastly superior!”

Early in the straight, it appeared that he might just have a lap on his rivals as he fought on doggedly. But soon after, the white flag was raised and he surrendered to a host of challengers.

Eyes darted everywhere in search of the danger; one only needed to look for the Te Akau tangerine yet again as Pin Me Up raced up ominously. By the time she cleared out, the only danger emerged from behind in the shape of Geelong Classic (Listed, 2200m) winner Tutukaka (Tavistock) – the half-brother to another former Karaka Million 2YO winner and subsequent multiple Group 1 winner in Melody Belle.

Though he closed to within a neck, he couldn’t pass Pin Me Up, who in winning the race became her sire’s 86th individual stakes winner. Karman Line (Myboycharlie) finished third, a length and a half behind the runner-up, with On The Bubbles weakening into seventh, over five lengths from his stablemate.

“She has been a slow maturing filly that has needed a bit of time,” Richards said. “Andy Williams bought her for Peter Collier from Sydney, who owns her and he has been very patient, so I’m thrilled to get a very nice win for the boys.

“You can’t condemn On The Bubbles on that as he was three wide racing on the speed when Opie went forward and got caught out there, which made it an ugly watch. Thankfully we had a very able sidekick in Pin Me Up to do it for us.

“I’d like to give the team at home a big thanks as she is not the best of eaters and I’m also thrilled she carries that very good Waikato Stud brand.”

The filly holds nominations for the Levin Classic (Gr 1, 1600m) and the New Zealand Oaks (Gr 1, 2400m), both at Trentham on March 19, but Richards believes that Mark Walker, who returns from Singapore to take over the Te Akau stable in Matamata, will be the one to benefit from her in the years ahead.

“Whatever she does as a three-year-old, she will be lengths better next season,” he said. “It’s all in front of her and we won’t rush with her.

“I’d also like to give a big thanks to Sam Weatherley. He is the next generation of riders coming through, he has been to Sydney and learnt his craft and after he rode with such maturity for us on New Year’s Day, we were happy to give him the opportunity today.”

Pin Me Up is one of two winners out of the winning O’Reilly (Last Tycoon) mare Brampton Loco, who is herself a half-sister Group 2 winner Pimms Time (Pins). Brampton Loco died in 2019 while foaling Pin Me Up’s younger half-sister by Tivaci (High Chaparral).

Slipper for Plymstock and Counttheheadlights to Blue Diamond

Almanzor was not the only first season sire to strike success yesterday with another current New Zealand-based shuttler, Ribchester (Iffraaj), also chalking up his first southern hemisphere winner.

While trainer James Cummings admits that the Golden Slipper may be a bridge too far, the Godolphin operation will likely give the filly her chance after she scored by almost a length over Deep Expectation (Deep Field) with the fast-finishing Emperor (I Am Invincible) in third.

“She’s done a really good job on debut,’’ Cummings said. “Like a lot of these two-year-olds she’s growing still and putting it all together but she enjoyed the nice pace of five furlongs and was nice and strong late.

“Her half-brother ran in the Golden Slipper, it all got a bit much for him on that occasion but he’s a multiple Group 1 winner now and she’s a valuable filly for us and for the farm.

“I think we will just tread carefully but it will be interesting to see what she’s able to do if we put a little bit more pressure on her.”

Plymstock hails from the first of two crops produced by Ribchester in Australia, with the stallion now spending the southern hemisphere breeding season at Haunui Farm in New Zealand in place of his sire Iffraaj (Zafonic).

In 2020 Outdoor produced a filly by Street Boss (Street Cry) and was once again covered by that stallion last September.

The Blue Diamond Stakes (Gr 1, 1200m) is on the agenda for the Ciaron Maher and David Eustace-trained Counttheheadlights (2 c I Am Invincible – Tahni Dancer by Sebring) after he produced a strong win at Moonee Valley yesterday.

The son of Yarraman Park-based sire I Am Invincible (Invincible Spirit) defeated Sumatra (Lonhro) by a length and a quarter with Eros (Capitalist) finishing another neck away in third.

Counttheheadlights – who was purchased by Maher for $800,000 at the Magic Millions Gold Coast Yearling Sale from the Rosemont Stud draft last year, is now likely to join stablemate Latizia (Written Tycoon) on a path to the $1.5 million feature at Caulfield next month.

“I thought he was pretty good,” Eustace said. “He did everything very professionally and credit to the team – he jumped, he travelled, picked up when Ben (Allen, jockey) asked him to, finished nice and strong and beat a horse in Eros, who has had a start and ran well.

“To be honest it’s a beautiful program really, three weeks into the 1100 metres at Caulfield (for the Blue Diamond Prelude), let him have a rip around there and then two weeks into the Diamond as long as he pulls up OK.

“He’s a big, solid horse, he’s very sound and has plenty of condition on him so you would hope he does the job and he’ll head there all being well.”

The filly is out of the winning Group 2-placed Sebring (More Than Ready) mare Tahni Dancer, who is a daughter of Group 3 winner Tahni Girl (Redoute’s Choice).

Tahni Dancer has a yearling colt by Lonhro (Octagonal), a weanling filly by Capitalist (Written Tycoon) and she was most recently covered by Coolmore Stud-based Merchant Navy (Fastnet Rock).