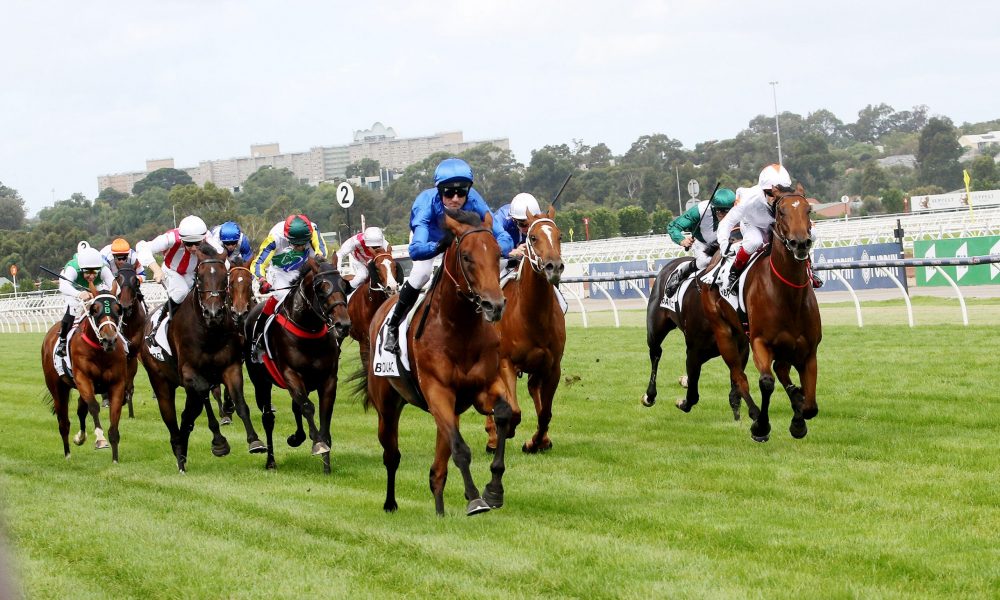 We all know the definition of insanity as stated by Albert Einstein: Doing the same thing over and over but expecting different results.

Yet with all due respect to the man, mentioned in dispatches as being no midweek maiden above the shoulders, doing the same thing repeatedly and seeing the same result isn’t necessarily a bad thing.

It’s been proven a brilliant tactic, in fact, in the creation of Godolphin’s latest poster boy Bivouac, who stormed to an imperious third Group 1 victory – while largely keeping things all in-house – in the Darley Sprint Classic at Flemington last Saturday.

The four-year-old entire is one of several star products to have emerged from a Darley philosophy, part-learned from breeding maven Bob Peters, of sticking with a mating you believe will work. Bivouac is the third of four full-siblings, by Exceed And Excel out of the More Than Ready mare Dazzler, and another’s on the way. But more about that later.

Bivouac (meaning a soldiers’ camp without tents or cover), descends from a cornerstone of Darley’s Australian operations, his third dam Camarena. A daughter of Danehill and the Marscay mare Canny Miss – an unraced half-sister to outstanding full siblings Canny Lad and Canny Lass – Camarena won almost a million dollars through nine wins from 1050 metres to 2400 metres, the furthest being the Group 1 Queensland Derby in 1999.

She was also the very first mare purchased by Sheikh Mohammed when he set up camp in Australia in 2001, in a near seven-figure deal brokered by another pillar of breeding, Yarraman’s Arthur Mitchell.

Camarena’s presence in Bivouac’s bloodlines sticks out for a couple of reasons. Aside from the obvious racetrack quality of such a versatile Group 1 winner, the New Zealand-born mare is the only non-American among the eight names three generations back in the pedigree, the tier featuring sires such as Danzig, Southern Halo and Elusive Quality.

Those early years in Australia represented something of an expeditionary force for Darley, which bred and sold yearlings at the time. One was Camarena’s third foal Camarilla, by the aforementioned Elusive Quality. Bought by the Inghams’ Woodlands operation for $900,000, she only won two races from 13 starts, but they were the Group 1 AJC Sires Produce and the Group 2 Blue Diamond Prelude.

Camarilla was therefore something of a good one to let go, but when Darley set up more fully in 2008 – buying out Woodlands’ stock (lock and barrel) – they got her back.

That year, Darley put her to another American in More Than Ready to produce Dazzler, a filly who won her first two starts at Geelong and Flemington but couldn’t repeat the trick in nine more tries.

But far more racetrack success was to come with Camarilla’s second foal. Sent to Exceed And Excel, she threw the outstanding filly Guelph, a four-time Group 1 winner, including Randwick’s Sires Produce-Champagne Stakes double in the 2013 autumn, and her Flight Stakes-Caulfield Guineas successes that spring. (A year after Guelph, Camarilla also threw eventual Group 2 Todman Stakes winner Ghibellines, by Shamardal, proving her breeding quality before her untimely death after just four foals.)

Camarilla going to Exceed And Excel had been a risk. It involved a very close 2×3 cross of Danehill, that champion stallion being the dad of Exceed And Excel, and the granddad of Camarilla, via Camarena. But another old line holds that this sort of thing is called “line breeding” when it works, and “in breeding” when it doesn’t. In the case of Guelph, it was the former.

So when Guelph’s half-sister Dazzler started breeding, Darley had no hesitation dabbling with the same sort of alchemy, and putting her to Exceed And Excel. Not once, but for her first three matings, producing three-quarter brothers to Guelph.

The first was Coruscate, the now six-year-old gelding who’s won eight races for Godolphin and half a million dollars, capped by a Listed 1200-metre double at Caulfield this spring.

The second was Sparks, who had three unplaced runs for Godolphin before being shuffled along, and is now a five-year-old gelding getting about in country New South Wales to no great effect. (OK, maybe this sort of thing doesn’t work every single time, although every rule needs an exception to prove it).

The third one along was Bivouac, winner of $5.5 million and counting.

Gambles, or experiments, like these are the sort you can take when you’re not producing horses to please yearling sales buyers, as Darley’s head of sales Alastair Pulford says.

“When we sent Camarilla to Exceed And Excel, it was an interesting mating at the time because it involved very close in-breeding to Danehill, which most people wouldn’t espouse,” Pulford tells ANZ Bloodstock News.

“Breeding Guelph was a risk, 2×3 to Danehill, but the physicals matched: Camarilla was a beautiful big strong mare, so we weren’t worried about breeding a little light-boned ratty thing, because that’s not what either parent was. And Guelph was a big strapping filly, who could obviously run.

“So then to breed a three-quarter relation was reasonably obvious, especially since More Than Ready (Dazzler’s sire) matches so well with that Danehill sireline. So there’s a lot of Danehill in Bivouac’s pedigree, but we’d done it before, it had been successful with Guelph, so we weren’t scared to try it again, especially since Danehill was another generation further back in the female side. Plus the in-breeding to Danehill is through a son and a daughter. If it does work, it seems to work best that way.

“This is the beauty of breeding for ourselves. A lot of commercial breeders may not go down that path, for fear that yearling buyers would be put off. We didn’t have to worry about that. It’s the racehorse that’s going to judge our breeding, rather than the yearling buyers. You also get to develop these families, and you’re in control of so much more then than when you’re selling horses away at the sales.

“We’d also worked out Exceed And Excel works very well with mares who could gallop. So the year Guelph was bred, we sent every mare who could run and that wasn’t by Danehill to Exceed And Excel, including Camarilla. And that’s the same crop (2010) from which Exceed And Excel got Sidestep and Overreach. It was a magnificent crop really, probably his second best after this one (2016), which has now had Bivouac, Exceedance and Microphone.”

So persistence is a key theme. Dazzler now has a two-year-old filly by Medaglia d’Oro, aptly-named Glittery, in training, and a yearling colt by Lonhro. But she also has a filly foal on the ground by Exceed And Excel, and has just been covered by that stallion again.

“It’s probably a lesson we’ve learnt from others, including Bob Peters: if you think a mating works don’t just try it once,” Pulford said. “Bob’s a good client, and he’ll repeat a mating four of five times in a row without querying it.”

For example, Peters sent his mare Arcadia to Coolmore’s Pierro two years running. The results have been the stakes-winning Arcadia Prince, and triple Group 1-winning little sister Arcadia Queen, the other star of last Saturday through her Mackinnon Stakes win.

“Often it doesn’t work the first time, or sometimes,” Pulford says, “but if you think it’s the right idea keep going with it.”