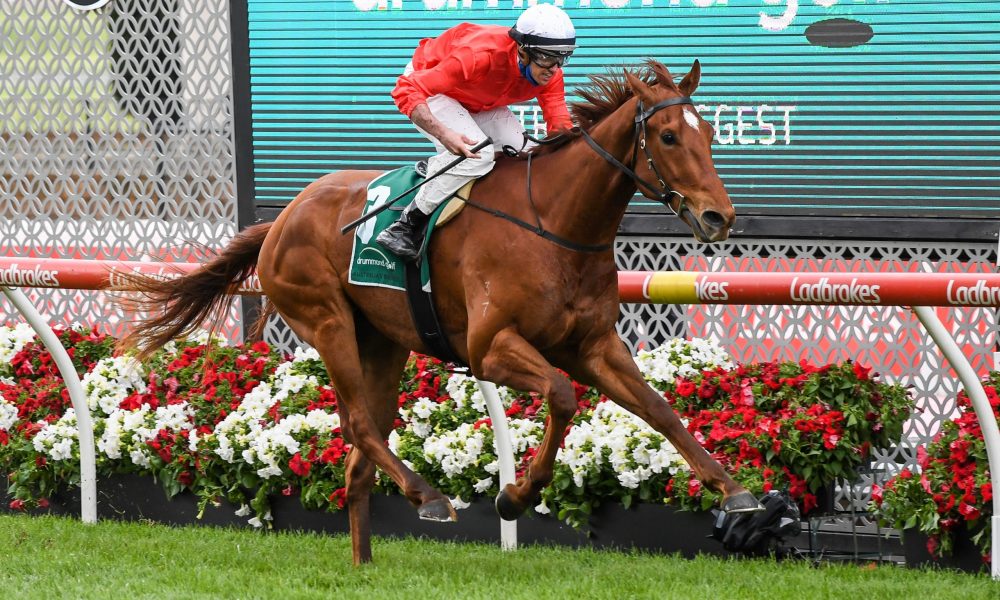 They say some have greatness thrust upon them. Perhaps others have it forced upon them – by old fashioned economic reality.

They also say too many sweets are bad for you, but in the case of whisking up this pedigree, you could say oodles was still not enough.

The main highlight to be found from the bloodlines of Cherry Tortoni is that he’s out of a half-sister to the outstanding Tie The Knot, another home-bred produced by the same (human) family, whose 13 Group 1 wins are bettered in Australasia only by Winx, Black Caviar and Kingston Town.

But the first thing you notice about Cherry Tortoni’s pedigree is what’s not there.

But there’s not a drop of Australian blood on Cherry Tortoni’s paternal side. He’s a son of Irish-bred Night Of Thunder, the dual Group 1-winning son of Dubawi.

Cherry Tortoni’s owner-breeder Sandy Tait – who has a fair pedigree himself – took the plunge in sending Tortoni to Night Of Thunder in his first and, it turns out, only season in Australia, at Darley’s Northwood Park stud near Seymour, Victoria.

It wasn’t a deliberate move to steer clear of Danehill, but what a stupendous move it’s become.

For one thing, Cherry Tortoni won his second stakes race at his seventh start in last weekend’s Drummond Golf Vase at Moonee Valley, and the Patrick Payne-trained chestnut is now co-favourite for Saturday’s Victoria Derby.

And secondly, Night Of Thunder has become something of a sensation, suggesting that while gelding Cherry Tortoni has no breeding future, his potential as a racehorse only grows.

In Australia, Night Of Thunder sits third among second-season sires, with eight winners from 18 runners, and a 13 per cent stakes winners to runner ratio.

Back home, however, the magnificent chestnut is top of the charts on winners-to-runner in Britain and Ireland in 2020. His 34 winners from 77 runners (44 per cent) surpasses the likes of his father Dubawi and the great Galileo (42 per cent each), Frankel and Invincible Spirit (both 39 per cent).

On black type winners to runners this year, Night Of Thunder is second only to Galileo (14.29 per cent to 7.79 per cent).

He currently tops the European second-season table, with a robust 52 winners from 102 runners. Last month he took the inaugural Special Merit Award for the deeds of his first crop in 2019. Progeny such as Dante Stakes winner Thunderous and Jersey Stakes hero Molatham have helped him to no fewer than 14 black type winners from his initial crop – hailed by Darley as the best start to a stud career since the Pattern began.

“I guess you could say we lucked in,” Sandy Tait tells ANZ Bloodstock News, with more than a dash of Australian bush understatement.

“Don’t get me wrong, I’m all for Danehill if you can get it. But this was really just a cost thing.

“I suppose it is pretty unusual in Australia these days to not see Danehill anywhere in a pedigree, but no, it wasn’t on purpose. We always thought he was probably a bit expensive for us, Danehill, or his sons for that matter.

“But it’s great to see Night Of Thunder take off, and you imagine he’ll only get better, as he gets better mares now people start to take notice.”

Tait, 79, has a background of blending the speed of Australian mares with the stamina of European stallions. Night Of Thunder’s service fee was attractive; so too his racing record.

“As a country we’ve neglected good staying sirelines. It’s very hard to get them, because those types of sires largely stay in the US or Europe mostly, but Coolmore and Darley bring them out so we’ve got the opportunity to use them. Those two studs have done an incredible job, and it’s enhanced our pedigrees enormously, and the ability of our horses.

“Plus, Night Of Thunder answered all the right questions. He stood at only $15,000 and was an outstanding racehorse. To win the 2000 Guineas and Lockinge Stakes takes a good horse.”

For Tait, Cherry Tortoni could be the latest star from a long family line of them. As with Tie The Knot, the grazier from Coolac, near Gundagai, races the gelding in partnership with his sister Jill Nivison, and the two siblings descend from Australian breeding royalty.

Their parents Griff and Daisie Tait were pillars of New South Wales breeding. They owned the blue hen Dark Jewel, winner of the inaugural Australian Broodmare of the Year award in 1969-70, and whose foals included Baguette, Cabochon, Heirloom and Betelgeuse, and who is memorialised in the Dark Jewel Classic, run each year at the heart of Australian breeding in Scone.

When the Taits sold Baguette to stud, they bought a New Zealand broodmare called Oodles, who brought staying blood through her sire Alcimedes. Oodles (out of Several) bore the Taits a string of aptly-named offspring, such as Ample, Plenty, Umpteen and That Will Do.

Then there was Not Enough, by Baguette. In 1980, she was put to one of Star Kingdom’s better sons, Kaoru Star, to produce a filly called That Is A Shame. She lived up to her name – accidentally losing an eye, which cost her a racing career – but perhaps that helped preserve her breeding future.

Put to American-bred sire Whiskey Road, whose son Strawberry Road had become a champion, That Is A Shame bore as her second named foal a chestnut filly the Taits named Whisked.

Despite often running into the superb Tristarc, Whisked had a glorious racing career, winning the Group 1 Thousand Guineas and running second in the VRC Oaks. This is all part of a glorious history of fillies by foreign sires for the Taits, also including 2004 AJC Oaks winner Wild Iris (Spectrum), and her stakes-winning daughter Zanbagh (Bernardini), who was bred by Sandy and wife Kathy, and who was second in the VRC and AJC Oaks in 2013-14.

At stud, things grew even better for Whisked. Having taken up the reins of the family’s breeding interests, Sandy and Jill sent Whisked to another US-bred, then in New Zealand, in Nassipour, to add some staying blood. Out came her second foal – Tie The Knot – who earned Whisked the 1998-99 Australian Broodmare of the Year award, after a season in which he claimed just the four Group 1s.

Keeping up the foreign flavour, the Taits put Whisked to Singspiel in 2001 and welcomed eventual Group 3 winner Dream Ballad, before a 2005 covering by Shamardal bore Listed winner Hood.

All told, Whisked was a prolific producer, delivering 13 named foals in 16 years. Her last came in 2009, and sadly, she didn’t get up.

Continuing an Italian dessert theme which had earlier brought her filly La Zabaglione, the Taits named this one Tortoni. Reared by a nanny mare, she was said to have ability, but she also had a wind issue, which restricted her to four starts for one country win.

The Taits twice put her to Reset to produce Cafe Tortoni, who’s won two of 13 for Payne, and another mare in Torsiton, before the siblings’ charmed stroke in trying out the unproven Night Of Thunder.

Out came Cherry Tortoni, the first of the Tait stars born at Sandy and Kathy’s son Olly’s Twin Hills Stud, up the road from his parents’ place, near Cootamundra.

“He’s got the same head as Tie The Knot,” Sandy says, “and he’s a chestnut as well, but he looks more like a stayer: longer and taller.

“The mating was a bit of luck really. A bit like when Tie The Knot was born: Around the same time we had another Whisked yearling, by At Talaq, who we decided to sell. Thank goodness we decided to hang onto Tie The Knot!”

The Taits, and anyone who knows them, will be hoping Cherry Tortoni serves them up another sweet treat on Saturday.