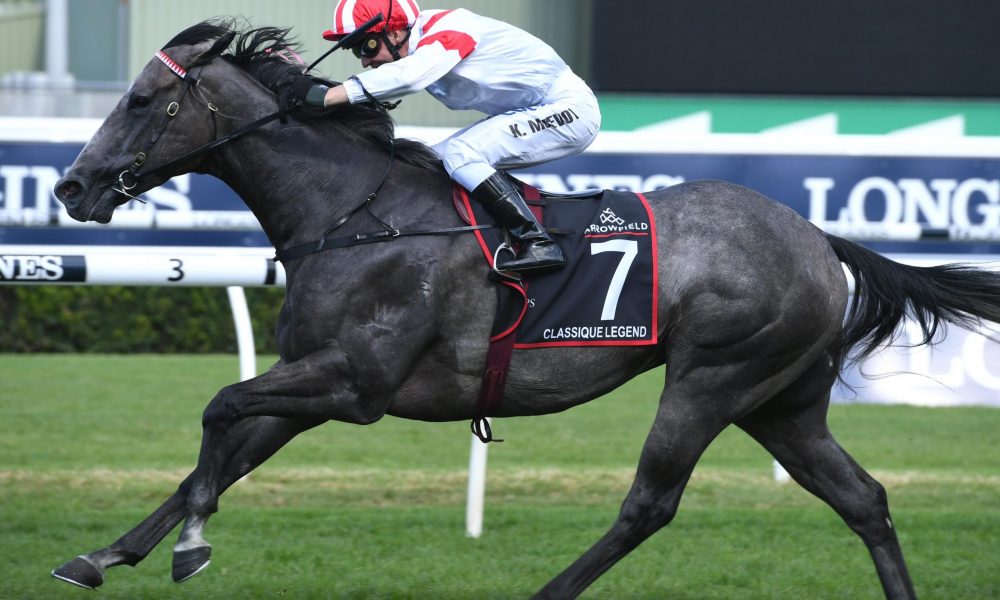 It took Racing To Win four-and-a-half years to earn $3.7 million in prize–money, through a stellar career in which the gelding won five Group 1s – including Randwick’s Big Mile double the year he was the nation’s champion male three-year-old.

Last Saturday at Randwick, it took Classique Legend 68-and-a-half seconds to win almost double that amount – $6.75 million – in claiming the fourth edition of the new pot of gold on the Australian calendar, The Everest.

Why the comparison? It might just come up at their next family gathering, with the baton of bragging rights possibly changing, from grey uncle to his grey nephew.

For while the pedigree of both horses has been laced with quality, two of the biggest stars from its female line – which you could say began in Great Depression USA – have come along in the relatively recent past.

Classique Legend was a $400,000 yearling purchase at the 2017 Inglis Classic Yearling Sale, with most of the value coming through his dam.

Pinocchio, who somewhat oddly was no “real boy” but a grey mare, fetched a decent $210,000 when sold at Inglis Easter in 2011. Injury curtailed a promising career on the track, with a Wyong maiden win her only podium finish in eight starts. But her real potential lay in her ancestry, as a full-sister – by Encosta De Lago out of the Kenny’s Best Pal mare Surrealist – to Racing To Win.

Thus Pinocchio realised a solid return on investment when sold for $320,000 at the National Broodmare Sale in 2014. Yet that was a long way short of her mother, who – two months after her son Racing To Win won the George Ryder and Doncaster in 2006, set records in fetching $1.6 million, while in foal to Fastnet Rock. It was the top price in history for a mare sold at public auction in Australia. She had also become the highest-priced animal to have passed through the Magic Millions ring.

Pinocchio was bought in 2014 by Tyreel Stud, the former property of Sydney racing and breeding heavyweight Jim Fleming, which had only recently been purchased by Linda and Laurence Monds. The mare was carrying her first foal, to Foxwedge, though that was largely coincidental.

“I was drawn to her pedigree of course, but also how she was physically,” Linda tells ANZ Bloodstock from her sprawling farm by the Nepean River at Agnes Banks, on Sydney’s western fringe, next door to Godolphin’s training centre.

“She had this beautiful loose walking action, she was very strong in front and behind, she had a wonderful deep girth and a great presence about her.”

Linda had brought along her parents, who had kept broodmares themselves, and who were also very taken by Pinocchio. Linda also brought a budget, but she might have dropped that somewhere.

“I put in what I thought was going to be my last bid, but then got outbid again. My mum Helen was kicking me under the table, telling me to go higher, and I did. Budgets always get blown after all. Still, I felt quite ill when I thought about how much money I spent on her.”

It wasn’t a bad early purchase, you might say. Pinocchio’s Foxwedge colt sold for around $82,000 at the Scone Yearling Sale and became Puppet Master, a winner of four races, one at Canterbury, before being recently retired.

Monds put Pinocchio to Not A Single Doubt, to complement the early speed in the family. This mixed a strong Northern Dancer influence from the sireline (Danzig-Danehill-Redoute’s Choice-Not A Single Doubt), with the slightly weaker (in Australia) Northern Dancer-Fairy King line through Pinocchio’s sire, Encosta De Lago. The result was Classique Legend, and after some shrewd early patience from his trainer Les Bridge – for which Monds is extremely grateful – the rest is megabucks history.

Monds next put Pinocchio to Sebring, for a little more size, and out came a magnificent colt named Aethero, who outstripped his older half-brother in fetching $575,000 at Inglis Easter.

Aethero went to Hong Kong, was gelded, and won five of his first six starts – including the Group 2 Jockey Club Sprint last November. He was third in the G1 Hong Kong Sprint the following month, spurring talk of a trip to Sydney to contest the 2020 Everest alongside his half-brother, before a bleeding attack in April scuppered that idea.

Monds is excited about Pinocchio’s subsequent progeny. In 2017 she put the mare to So You Think, “to add a little refinement”, and the result is a “sensational” grey colt called Fairy Legend, now being prepared to debut by brothers Gary and John Moore at Rosehill.

After skipping a year she felt her mare deserved to go still higher, and she’s now looking at a filly foal by I Am Invincible who has “hit the nail on the head” in terms of match-ups for the mare she nervously bought six years ago, who is now close to proving herself the blue hen all breeders crave.

Tumbling back through Classique Legend’s pedigree, you encounter several outstanding gallopers, not just Racing To Win but the 1994 Kentucky Derby winner Go For Gin, and the Hawaiian-flavoured likes of Hula Chief and Hula Drum. Keep going to mainland USA to find where all this quality most likely kicked off, and it involves another Helen who just wouldn’t be denied.

Black Helen brought connections bountiful times when there was not much of that going around. She was named America’s champion filly of 1935, during a career of 15 wins from 22 starts which later brought entry to the US Hall of Fame. Like many a great racemare, she was no immediate sensation at stud, throwing no stakes-winners, but her genes evidently flowed through her offspring.

Never Hula was stakes-placed but earned greater fame as the grand-dam of Go For Gin and the outstanding Pleasant Tap, America’s Eclipse Champion Older Horse of 1992.

Hula Bend was a mixed bag at stud, having 14 named foals, of which at least six never raced. She had little success through five foals in the US and Ireland, but things began to change when she reached New Zealand in 1977. After two more unraced foals, she was put to Marceau in successive seasons, and the results were stupendous: Hula Drum became a Group 1 winner (of the Ryder Stakes) and was twice placed at the top level. Hula Chief won seven of 11, including Flemington’s Lightning Stakes and the Doncaster Handicap, in 1986.

Before leaving Ireland, Hula Bend also bore Hula Gold (Rheingold), who was unraced but followed her mum to New Zealand, in 1984, and kicked off this branch of the family.

Hula Gold threw the VRC Derby-placed Sir Midas (Sir Tristram) before crossing to Australia, where she was put to the grey sire Kenmare to produce Sunset Beach, which is where our shades of grey arrive.

Yet another who never raced, Sunset Beach had seven foals. Six were fillies, four of them greys by Bletchingly’s son Kenny’s Best Pal. One of those was the stakes-winning Mardi’s Magic. Another, who placed twice from five starts, was Surrealist.

Surrealist threw Racing To Win as her second foal, in 2002. Two years later came Caulfield Guineas Prelude-winner Purrealist (Tale Of The Cat), who went on to sire Hawkspur among others. And in 2009 came another of her five Encosta De Lago foals – Pinocchio.

For an unsound racemare with a boy’s name, she’s doing very well for herself indeed.

In fact, the old grey mare might be about to turn blue.