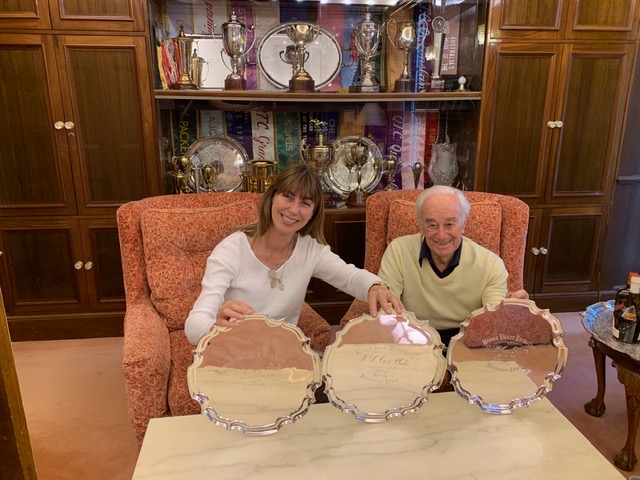 The best-known link between Denmark and Australia probably comes in the form of Mary Donaldson, the former Tasmanian advertising worker who married the heir to the Danish throne and is now Crown Princess Mary.

But you wonder if anyone in Denmark knows there’s an extremely formidable branch of Australian thoroughbred royalty that traces back, the other way, to their country.

Do any of the 8,225 residents of Helsinge, 45km north of Copenhagen, know an unraced mare bearing their town’s name gave birth to one of the greatest racehorses the world has known, the unbeaten Black Caviar? And to her half-brother All Too Hard, the quadruple Group 1-winner now sire of turf stars like Alligator Blood and Behemoth?

And would the Danes know of Scandinavia – the horse, not the peninsula – and her impact on a sport more popular at the other end of the earth than in any other country? (Some will have heard of Danehill but perversely, for Australia, he doesn’t even get a mention in today’s pedigree!)

One name the Danish will know is Ole Kirk.

But again we need to distinguish between versions.

The two-legged variety was the inventor of perhaps the most famous thing of all about Denmark – Lego – with former carpenter Ole Kirk Christiansen coming up with the little plastic blocks in the 1940s.

The four-legged edition named after him, meanwhile, set himself up to continue Australian racing’s famed Danish line with a lucrative stud career in claiming Saturday’s renowned stallion-maker, the Caulfield Guineas, to follow his first Group 1 triumph in the Rosehill’s Golden Rose two weeks earlier.

From somewhat frustrating beginnings of one win in six starts, Ole Kirk is now not only Australia’s most precious racehorse, with a value of around $40 million, but is also the latest generational flag-bearer for his Scandinavian-themed female line. To find when and how it all started, all (not too hard) roads lead back to a giant of Australian breeding.

David Hains, the Melbourne finance billionaire, had his best-known impact on Australian racing in the mid-1970s by importing an unraced German mare named Ada Hunter.  She had four foals here, two of whom raced, and one of whom was named Kingston Town.

(Ada Hunter’s dam, by the way, was called Almah, thus complying with a quirky rule of the German stud book, that foals must have a name starting with the same letter as their mum. Melbourne Cup winner Protectionist was out of Patineuse. Fadango, imported here to race as Lord Fandango, is out of Fitness, and so on. But I digress…)

That Hains, in cahoots with his very well-connected friend, breeder and champion golfer Norman Von Nida, took a plunge on buying a German broodmare, at a time when such beasts were extremely rare in Australia, speaks volumes for his adventurous spirit. That Hains, acting alone, looked to Denmark soon afterwards was quite astounding.

To this day, the grey mare he bought, Love Song, remains one of only five entries – out of more than 1.1 million in the Australian Stud Book – with the suffix DEN beside its name.

There’s a dash of the unusual in Ole Kirk’s paternity as well. Grand-sire Iglesia, a half-brother – out of the Marscay mare Yodells – to the outstanding dual Group 1-winner and Melbourne Cup runner-up Yippyio, descends from the lesser-known Try My Best branch of the Northern Dancer line.

But that goes nowhere near the moon-shot status of Hains’ foray to Denmark.

Love Song, a 1976 offspring of British pair Warpath (by Sovereign Path) and Folk Song, won twice from 11 starts, including the Group 1 Danish Oaks, and ran second in the Swedish Oaks before Hains bought her, he recalls, for around £15,000 – a truly princely price for Denmark.

In Australia, Hains’ gamble reaped no immediate dividends. Love Song dropped only two fillies at Hains’ Kingston Park Stud on the Mornington peninsula, and both were unraced. Sold on, she had another filly, her third and last foal, in 1987, who earned the inglorious descriptor – “placed”. But rich success was to come.

The unraced Song Of Kingston, by Kingston Town’s sire Bletchingly, produced Muirfield Village, who for Hains and Von Nida won a Group 2 Hill Stakes, came second in a Victoria Derby and a Spring Champion Stakes, and contested that Cox Plate of 1992 as a three-year-old.

But the most successful was the unraced Song Of Norway, who threw Scandivania, who threw Helsinge, who threw Black Caviar (named for the town Helsinge’s most famous product) and her full sister Naturale, who has continued the form of unraced mares in this distaff line by bearing Ole Kirk – the son of Written Tycoon who is thus far her only progeny to race.

Among those four Australian-born females, only the Snippets mare Scandinavia raced, and did so very well. The John Sadler-trained sprinter won at Group 2 and was placed at Group 1 four times, including a third in the Flemington Newmarket to General Nediym, coincidentally prepared by the man who’d enjoy quite the ride with Scandinavia’s granddaughter Black Caviar, Peter Moody.

But what an incredible legacy Hains’ vastly speculative Danish purchase has had.

“Norman was a great authority on bloodlines at that time. I knew nothing about it,” Hains, now 90, tells ANZ Bloodstock.

In the mid-1970s, Hains and Von Nida had looked to Italy’s famous Dormello Stud to procure Ada Hunter and Ursula Lauderdale, dam of dual Oaks winner Lowan Star. In 1978, the pair also bought the stallion Claude from the stud to stand at Kingston Park, in a move to bring a Nearco outcross to Australian stock. He sired Rose Of Kingston,  a triple Group 1 winner and Australia’s Horse of the Year in her ATC Derby-winning three-year-old season, and later the dam of Hains’ Melbourne Cup winner Kingston Rule (Secretariat).

But a couple of years after buying Claude, Hains struck out on his own, looking to Denmark.

“I guess Denmark was pretty unusual for here, but I just saw Love Song’s pedigree in a catalogue and saw she’d won an Oaks and was placed in another. I don’t think I even knew Denmark had an Oaks!” Hains said.

“I saw she was by Warpath, and thought that would be an unusual breed for Australia – I’ll see if I can buy her and cross her with our horses here.

“I was always on the lookout for some European blood to outcross with Australian blood, particularly their stayers with our sprinters. I either bought her before an auction, or at an auction, or she was passed in, I can’t really recall, but it was pretty simple. It wasn’t what you’d call a serious purchase. It was just one of those speculative things you try to see if it works, and it did. You have plenty of misses but this one worked.

“If I’d known then what I know now, I’d have never sold her or her progeny, but we liked to keep young mares at the stud.

“But it does give you a good feeling to see the impact she’s had. I know when Black Caviar was racing, it was a real thrill to think she’d come from this Love Song line.”

The line hasn’t only produced strong females, with Scandinavia also delivering the redoubtable sprinter and sire Magnus (by Boom Time’s sire Flying Spur), and Helsinge’s meeting with Casino Prince bearing All Too Hard.

Ole Kirk, raced by a group including three of Black Caviar’s owners  – with Neil Werrett’s stake in Vinery Stud signalling his likely home after the autumn – might just be the colt to add the cherry on top of this Danish affair.