It’s Official, Logan and Hakim off the mark with double 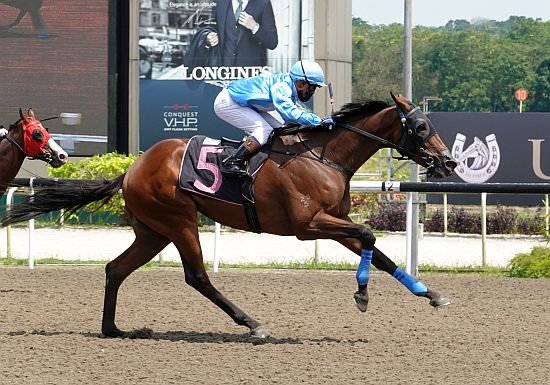 Trainer Donna Logan’s desire to combine with rising apprentice jockey Hakim Kamaruddin for a win was finally granted on Saturday, and in double dose for good measure.

Known for being a talent spotter back home, having groomed many top apprentices, Logan had been supporting fellow Kiwi Mark Walker’s lad from Malaysia regularly in the last three months. Three seconds have come their way, including two with Good Luck Charm (The Factor), but that first success has proven elusive.

Until that very Good Luck Charm turned exactly that at their 11th pairing by going one better in the S$50,000 Class 4 Division 1 race over 1000m on Saturday.

Two races later, the floodgates were really and truly flung open when favourite Official (The Factor) also saluted in the S$30,000 Class 5 Division 2 race over 1700m.

And by a happy coincidence, both winners have The Factor as their sire and are also raced by champion owner Falcon Racing Stable.

To Logan, the real “factor” was the young man’s polish in the saddle, helped no doubt by his three-kilo allowance as well.

“Hakim’s a very capable rider. He listens to instructions, but obviously horses also run for him,” said Logan.

“There’s just something about him. When you watch his ride on Good Luck Charm, you could see how he didn’t go eyeballing the favourite and leader (Resolution), and waited until the last 100m to get to work on him.

“He thinks about what he is doing, he will go a long way. Most of the time, it’s the first time he gets on my horses as he doesn’t ride them in work, but he rides them to instructions and it’s very encouraging for him.

“You actually saw how he carries instructions out to the letter on Official even more. I told him this horse doesn’t like kickback, and to get the best of him, he has to go around runners.

“As he was drawn in three, you could see how he was thinking ‘how am I going to get out?’ but he did get the horse out and they won a nice race.”

Indeed, Hakim, who was formerly indentured to Frank Maynard in Malaysia and has now taken his Kranji score to 19 winners, six behind reigning champion Simon Kok Wei Hoong, showed a tactical mind beyond his age at both victories.

On the class riser and five-year-old entire Good Luck Charm (S$16), the Kelantan-born rider had favourite Resolution (Toronado) in his sights from the start, and when they locked horns for a titanic duel in the home straight, Hakim went head to head against one of the most vigorous senior riders at Kranji, Louis-Philippe Beuzelin to eventually get his measure by half-a-length.

Al Green (Exchange Rate) ran third another three and a quarter lengths away. The winning time was 58.92secs for the Polytrack 1000m.

Hakim’s win atop Official was carved out in more or less in the same register except he had to sweat for a run before he could be given full bore inside the last 150m.

Smothered inside runners for most of the way, the S$16 favourite exploded away to a two-length win on Success Street (Niagara) with Vesontio (Champions Gallery) in third another length away. The winning time was 1min 47.29secs for the 1700m on the Polytrack.

Good Luck Charm has now taken his budding career record to three wins, three seconds and three thirds for prizemoney around the S$120,000 mark for the Falcon Racing No 8 Stable, while Official is now a two-time winner from 20 starts for stakes earnings in excess of S$60,000 for the same connections.

Trainer James Peters was a happy man on Saturday after Mandrake (Not For Sale) emerged as the first winner from a pioneer group of Argentinian-breds raced by a new syndication group.

The Englishman was not so thrilled 10 months ago when the shipment was caught in the wrong place at the wrong time.

The plane they had boarded was grounded in Buenos Aires after it was searched and a stash of 80kg of cocaine was seized.

Unfortunately, the drug bust made headlines around the world, with Peters’ five horses the unwitting fellow passengers to the unsavoury cargo.

That unfortunate and rather bizarre episode is now done and dusted, especially after the five stranded horses finally landed one month later than scheduled.

With four of them unraced youngsters, Mandrake, a five-year-old by Not For Sale (Parade Marshal), was by all accounts the one who would be the most likely to give the new group headed by South African racing manager Justin Vermaak a first toast to forget the Buenos Aires debacle.

After knocking on the door at his first three runs, including a closing third place to Heartening Flyer (Excelebration) in a seven-furlong race at his last start, Mandrake got right on target this time in the S$50,000 Class 4 race over 1600m.

Scraping paint worse than midfield, Mandrake looked to have the task ahead when he came off the fence for his challenge at the top of the straight with race-leader Ironchamp (Glass Harmonium) showing no signs of letting up, but under French jockey Marc Lerner’s strong urgings, Peters’ ward ground his way past Steven Burridge’s last-start winner for a gutsy neck win.

Centenary Diamond (Kitten’s Joy) must have had his supporters cheering when he zoomed up on the outside, but he could not quite match Mandrake’s superior turn of foot, having to settle for third place another length and a quarter away. The winning time was 1min 34.56secs for the mile on the Short Course.

“I’m very happy for the group, especially for Justin Vermaak and all of the boys who’ve got shares in this new syndication,” said Peters.

“This horse has improved since he’s landed here. He was a bit nervous, quite keen.

“The boys at the stable have done a great job to switch him off. He’s learned to be more relaxed.

“From the barrier, we thought we might go forward, but he was a bit slow at the gates, and Marc gave him a 10-out-of-10 ride.

Now that Mandrake has opened the account, Kranji is waiting with great anticipation for the remaining four to show what they can do.

Tesoro Pirata (Orpen) is the only one to have made his Singapore debut when he beat one home in a Restricted Maiden race over 1200m on October 3, but Peters half-expected that, confident their ability will eventually come through, just like for Pini Pons, Under Oath and Whiz Fizz.

“They are coming along nicely. Obviously, they have taken a bit of time,” said Peters.

“It’s only their first prep. In New Zealand and Australia, they are trialled and then put in a paddock, but they don’t do that in Argentina.

“Some had to be gelded, a few small things like that happened, others got shinsore, but they are nice types and have reached a nice level of fitness.”

Not at all an Unsung Hero first-up

Unsung Hero (Spirit Of Boom) surprised many when he drew clear to a resounding win first-up in the S$20,000 Open Maiden race over 1000m on Saturday, writes Sharon Zhang.

Unsighted for close to 17 months since his last-start third to Surpass Natural (Elvstroem) in a Restricted Maiden race on May 31 last year when trained by New Zealand trainer Donna Logan, the five-year-old son of Spirit Of Boom (Sequalo) never looked in doubt from barrier rise this time.

At his first start for his new handler Jerome Tan, the S$32 shot sat in third out wide behind S$10 favourite Mr Showman (Showcasing) and Super Pins (Pins), and was full of running when launched by apprentice jockey Iskandar Rosman turning into the straight.

The B Two Stable-owned gelding bounded past Mr Showman and Super Pins with consummate ease. He crossed the line first, three lengths clear of Lim’s Bestbreaker (Battle Paint), who tried as he might, was left chasing shadows after racing at the rear.

Mr Showman hung on for third place another length away. The winning time was 59.09 secs for the 1000m on the Polytrack.

Having picked up a third and a fourth in two races last year, Unsung Hero was not without ability. He had two seconds in two trials for Tan prior to the race, but ring rustiness was still a concern to the Singaporean trainer.

“It came as quite a bit of a surprise, given that he’s unraced for 17 months already,” said Tan of his 14th winner this season.

“He’s had a lot of issues and problems, but we slowly nursed him back to health.

“He has been working well. We knew there was a lot of pace in the race, so I discussed with Iskandar and the plan was for him to sit behind the leader.

“The owners are a bunch of good, young locals who are very supportive. They have two other horses, The Brotherhood and Sierra Conqueror (running in the last race later) with me.

“We’ll see how he pulls up after this race, but for now, sprinting races are for him.”

Unsung Hero’s first win in three starts has taken his earnings past the $21,000 mark for the B Two Stable.