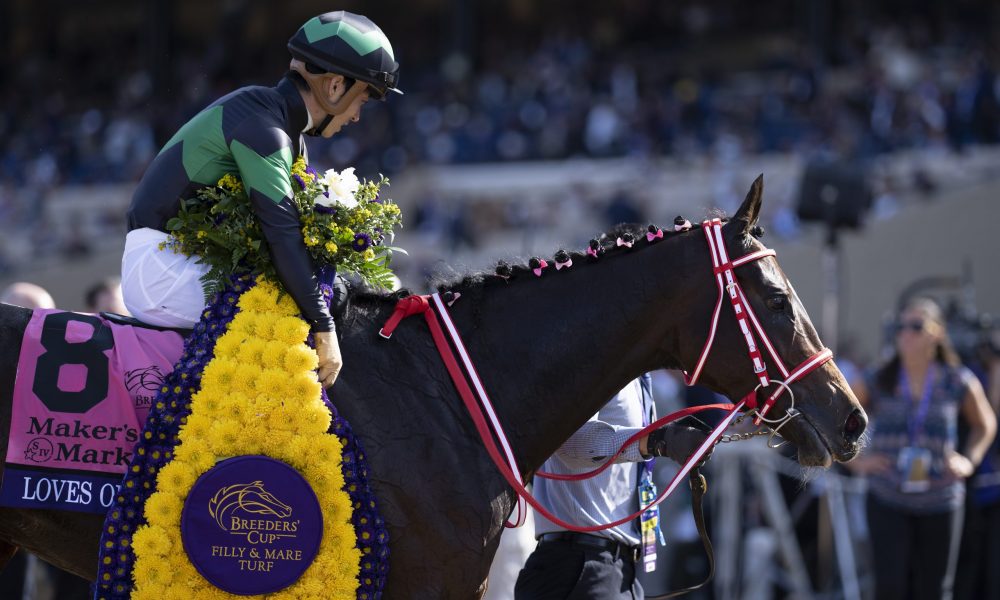 When Loves Only You (Deep Impact) made history on Saturday as the first Breeders’ Cup winner trained out of Japan it was no big surprise, not for those with an interest in Asian racing, at least. Her Breeders’ Cup Filly & Mare Turf (Gr 1, 11f) win was backed up by solid Group 1 form, as a Classic winner in her homeland and through her performances in Hong Kong and Dubai last spring.

The same cannot be said of her Yoshito Yahagi-trained stablemate Marche Lorraine (Orfevre), whose Breeders Cup Distaff (Gr 1, 9f) success was far less expected, even if her odds of 50-1 over-egged the shock value and evidently underestimated her talent. What both triumphs emphasised, however, was the strength not only of Japanese racing generally but also, more specifically, the depth of quality within that country’s distaff cohort and its ever-increasing prominence on the international stage throughout the past decade. The wins also gave a big nod to the merits of the Queen Elizabeth II Cup (Gr 1, 2200m), the latest edition of which is at Hanshin this Sunday.

“Marche Lorraine was unexpected,” said broadcaster and long-time JRA race caller Murray Johnson. “She’d had stakes victories here but she wasn’t a high-rated horse. I thought Loves Only You was the only winning chance out of the whole group that was going.”

But, although Marche Lorraine’s race record lacked a Graded race win before Saturday – which was her first race in the highest tier – the mare’s resumé boasted eight wins and four placings from 20 lifetime starts. Four of those wins came in Listed races on the dirt, including a preparatory victory in the Breeders’ Gold Cup (Listed, 2000m) at Monbetsu.

Her massive odds doubtless betrayed a general difficulty in gauging how Japanese dirt form might line up with US form, especially given the different make-up of Japanese dirt, a deeper, more sand-like consistency than southern California dirt tracks, which are a closer cousin to the Sha Tin dirt surface. Hong Kong’s smart dirt track runner of a few years back, Gun Pit (Dubawi), found that out the hard way when he flailed through the Chukyo dirt’s sharp kick-back to finish last of 16 in the 2015 Champions Cup (Gr 1, 2000m).

“The problem has been taking a Japanese horse racing on the kind of dirt we have here, take it to anywhere in the States and they usually don’t do too well,” Johnson noted.

Approximately 600 horses trained in Japan have travelled to contest overseas races, the majority on turf, delivering plenty of famous successes. The first of those to win a stakes race under a Japanese trainer was in fact a filly, Seeking The Pearl (Seeking The Gold), in the 1998 Prix Maurice de Gheest (Gr 1, 1300m) at Deauville and in 2005 the filly Cesario (Special Week) – dam of Group 1 winners Epiphaneia (Symboli Kris S ), Leontes (King Kamehameha) and Saturnalia (Lord Kanaloa) – prevailed Stateside in the American Oaks (Gr 1, 10f) for  Northern Farm syndicate Carrot Farm Co. Ltd. But it is only in the past few years that Japan’s mares have begun to stamp their authority and take a greater share of the global spotlight from their male compatriots.

Those great mares never contested the distaff-only Queen Elizabeth II Cup but the rollcall of those fillies and mares that did run in the race at one time or another – all beaten – and also enjoyed off-shore victories in the past half-decade is impressive: Lys Gracieux (Heart’s Cry) won the 2019 Cox Plate (Gr 1, 2040m), Vivlos (Deep Impact) landed the 2017 Dubai Turf, Normcore (Harbinger) took last year’s Hong Kong Mile (Gr 1, 1600m), the globe-trotting Deirdre (Dubawi) won the 2019 Nassau Stakes (Gr 1, 2000m), and Nuovo Record (Heart’s Cry) was successful in the Red Carpet Handicap (Gr 3, 11f) at Del Mar in 2016.

Dig back into Marche Lorraine’s turf form and there, too, can be found threads into the Queen Elizabeth. In March last year she defeated into second this year’s Victoria Mile (Gr 1, 1600m) runner-up Rambling Alley (Deep Impact) – a filly slated for Sunday’s feature – who had previously placed second and fourth behind none other than Loves Only You, who herself placed third behind Lucky Lilac (Orfevre) in the past two Queen Elizabeth II Cups.

Prior to the arrival in 2010 of Europe’s champion mare Snow Fairy (Intikhab), the race was barely on the radar of most folk outside of east Asia. The Ed Dunlop-trained heroine won by four lengths but when she returned in 2011, the margin of victory was cut to a neck.

“It may have put into trainers’ minds that they thought they could go overseas and be successful with their mares because that had been a talking point for a number of years. Snow Fairy contesting the race could have been one of a number of factors in moving that forward,” Johnson suggested.

A strong domestic programme in Japan has maintained depth to the distaff ranks, which has prompted some connections to look overseas for alternative opportunities. The Breeders’ Cup – which clashes with Japan’s autumn Group 1 majors – has now emerged as a viable option.

“When those horses are colts, if they’re really good, they usually don’t go beyond four years old anyway, so the mares tend to race for longer,” Johnson observed, noting that Loves Only You is owned by DMM Dream Club Co. Ltd, rather than a Yoshida-connected syndicate and might have as many as 10,000 owners involved, while Marche Lorraine is another owned by Carrot Farm which also owned Lys Gracieux.

While the Queen Elizabeth will offer a clue to the Hong Kong International Races in December, the action at Sha Tin last Sunday hinted again at lack of depth in the Hong Kong ranks as the unheralded Tourbillon Diamond (Olympic Glory) took advantage of a low weight to win the Ladies’ Purse Handicap (Gr 3, 1800m).

There was a blow on the undercard too when the David Hayes-trained Nervous Witness (Star Witness), pegged as a future Group 1 contender, lost his unbeaten status when third in the Class 3 dash at $1.10 odds.

“There’s nothing wrong with him,” Hayes told Asia Bloodstock News. “I was a bit stunned he got beaten but there was a bit of an over-boom and the market got it a little bit wrong. No excuses, he just had a bit of a flat day. He’ll be running again in a couple of weeks so we’ll see what happens, up in class and down in weight.”

Meanwhile, Hayes is confident he will receive good news imminently regarding his request to the Hong Kong Jockey Club to send his injured pair Lord Thunder (Night Of Thunder) and The Summit (Wootton Bassett) to Lindsay Park to rehabilitate. Both geldings have a hole in a tendon.

“I think it’s being approved but I haven’t heard officially yet. That’s the plan and they’ll be going in January,” he said.

Simply asking the question, by implication, cast a rare slight at the HKJC’s lauded HK$3.7 billion Conghua facility, criticism of which is not welcomed at HKJC HQ. The Mainland China complex is a fine example of making the best of what you were given to work with, being as it is shoe-horned tightly into a space created by blasting the crest off a mountainside.

“Conghua is an absolutely world class training centre, it’s outstanding, but they don’t have water-walkers and they don’t have uphill treadmills at this stage,” Hayes explained. “Hong Kong’s record for rehabbing tendons isn’t that great.

“Conghua has a steady uphill gallop, it’s only a slight incline, whereas the hills at home are more like Warren Hill in Newmarket. When they’re convalescing and they’re out in the paddock they can walk around and use their tendons, they’re more active out there. It’s just that Australia offers a better environment for rehab.”

The limited spelling paddocks at Conghua are at the foot of the steep mountainside: time in the paddock can be booked but only for set periods and horses must be loaded onto floats for the short journey down. Former Hong Kong champion trainer John Moore agrees with Hayes, that Conghua is a fine facility but tendon injuries can fix better in Australia.

“I brought a horse back to Australia called So Clever that as a PPG he bowed a tendon,” Moore said. “We sent him to Muskoka Farm, where all the facilities are available, and he won his first two in Queensland. He has shown no signs of that tendon reoccurring.”

If senior management does grant Hayes’ request, it would not only make good horse sense but also be an acknowledgement that Conghua is not the ideal in all facets of its creation. Whether or not any such move would establish a new precedent, time will tell.

“I believe they’re planning to put a water walker in,” Hayes noted.