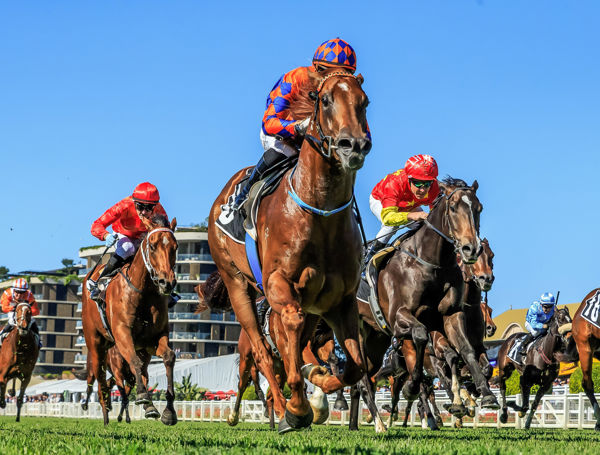 And now for Snitzel’s next trick: siring sires.

In 2016, the year which began the great son of Redoute’s Choice’s (Danehill) four straight general sires’ titles, he also debuted as a sire of a stallion in the first season table. It was a humble start, with Salade ending the 2015-16 season in 31st spot, after two non-winning progeny earned him $17,000.

But when a son of his son Jukebox – Johnny Rocker – took last Saturday’s Oxlade Stakes (Listed, 1300m) at Eagle Farm, it meant four Snitzel stallions stood in the top 14 among first-season sires this season.

Such legacy-progression can happen for successful sires. Fastnet Rock, Sebring and I Am Invincible each have three sons on the table at present.

Breeding experts, even from Snitzel’s home Arrowfield, will concede that, given the lower transfer of genetic information from fathers compared to mothers, much of a stallion’s success at leaving sires depends on the female lines he’s crossed with.

“It certainly helps your chances if you’re a highly successful stallion like Danehill, Redoute’s Choice or Snitzel,” Arrowfield’s Peter Jenkins tells It’s In The Blood, “but generally, for the line to continue, there needs to be strong input from the female side.

“The best sire sons will generally be an improved variation of their dads. That’s because in doing matings, you’re looking to bring in something the stallion lacks.

“If you look at Northern Dancer’s six or seven most successful sons, they will all have been different types of horses to him and to each other. Those sons who are carbon copies of their sire, with no improvements, will generally fade.”

That said, Snitzel has made an undeniable splash as a father of first-season sires in this nearly-ended term, and in some style. He compares favourably with contemporaries like the aforementioned I Am Invincible (Invincible Spirit), Fastnet Rock (Danehill) and Sebring (More Than Ready), who would also have benefitted from improvements from damlines.

A Snitzel son heads the first-season table in Russian Revolution, by prize-money and by his 13 winners (from 49 runners). In second-place by winners is Queensland-based The Mission (Choisir), with nine.

Invader sits ninth, with Jukebox and Menari 13th and 14th, and appearances lower down from Thronum and Boulder City – admittedly achieved with minimal earnings – give Snitzel six sons in the top 30, or one in five.

That upswing possibly reflects Snitzel’s better-quality mare books after his first handful of stud seasons. His popularity ballooned when his significant third season with runners, 2011-12, brought a leap from 39th to ninth on the general sires table.

But it’s not only first-season sires reflecting Snitzel’s granddad potential. One of his very different sons, Shamus Award, while a slow-burner to start with, is now fifth on the general sires table, one rung below Snitzel himself. Rosemont Stud’s 11-year-old has been helped to his career-best ranking by outstanding stayers Incentivise and Duais, telling subjects for this study.

“Shamus Award is just about everything Snitzel is not, but he’s his most successful son at stud,” Jenkins says. “His progeny have incredible stamina, and they didn’t get that from Snitzel. Snitzel’s lack of stamina has been countered here, by the staying influence in Shamus Award’s damline, and he’s leaving 2000m-plus horses because of it.”

Johnny Rocker became Jukebox’s first black-type winner on Saturday in surging to the front from gate 10 and comfortably holding off better-credentialed rivals to win his second from two.

In a career restricted to just eight starts, Jukebox won his first two impressively enough to be among the favourites for the 2017 Ladbrokes Blue Diamond Stakes (Gr 1, 1200m), but was scratched on race eve with lameness. The Ciaron Maher-trained colt resumed for his only black-type win in the Vain Stakes (Gr 3, 1100m) at Caulfield, before commencing stud duties at Aquis’ former Hunter Valley operation.

Standing for $11,000, Jukebox covered 94 and 63 mares in his first two seasons. A fertility rate of 58 per cent in those years contributed to a drop to $8,800 in 2020 – when he served just 19 mares – but that rebounded to 42 last spring, his first at Aquis’ Queensland farm after their departure from Hunter Valley.

With Johnny Rocker leading the way, Jukebox has had three winners from 11 runners, including that one stakes success, along with two Brisbane city placegetters.

“Sons of Snitzel are going well at stud,” says Aquis Farm’s sales director Jonathan Davies. “Only 12 months ago some people were questioning Snitzel as a sire of sires. You certainly can’t question him nowadays.

“What we’re seeing from Jukebox is he’s leaving very precocious types, very neat and well put-together, with a good shoulder, good girth, and they’re quite mature. It’s probably to be expected given he’s by Snitzel out of a Rory’s Jester mare, with Rory at one time the king of the kids.

“Jukebox has only small numbers, with just over 40 live foals from his first crop and 12 to race so far, but a lot of people bred to race from him, and there’s still a lot of unraced two-year-olds yet to come out by him, in good stables. Ciaron Maher’s got a couple he hasn’t taken the wraps off yet, and he seems to be very happy with them.”

Jukebox’s fertility improved in 2020, albeit from that 19-mare book, to 69 per cent and Davies is confident more progress will be shown in last spring’s coverings.

“We’ve tried a few different things with him and we’re confident we have him worked out,” he said, pointing to “how the mares have been set up”, as well as “just being in the Queensland sun”.

Johnny Rocker came to be a little accidentally. In August, 2006, Queensland financier and racing lover Jamie Stumer told old friend Eden Petrie – stable foreman for trainer Dale Sutton – that he and friends were aiming to buy a yearling the following January. Petrie said his stable was about to put a pair of fresh two-year-olds in a ready-to-run sale, and Stumer’s team should buy one of those instead.

He was a son of Magic Albert. Stumer and his mates tried to call him Fat Albert, after the TV cartoon, but with that already taken he instead became Albert The Fat, the gelding who’d win 11 races – including the BTC Cup (Gr 1, 1300m) and Emirates Stakes (Gr 1, 1600m) – and $1.3 million.

After he’d won seven of his first 10, Stumer and friends bought his three-quarter sister by Magic Albert from breeder John Allen, sight unseen. Named Margene, she was also talented, with three wins and four placing from seven starts. The last was at Canterbury, her first under Chris Waller – who told Stumer she was stakes-class. She bowed a tendon a few days later.

Sent to stud, her first three foals were fillies in Magic By Design (Master Of Design), Nothing Needed (Unencumbered) and Scissorshands (Scissor Kick), who haven’t amounted to much.

With the three foals on the ground, Stumer and co decided to sell Margene. They couldn’t. She was passed-in when just $2,000 was bid towards a $20,000 reserve. So her owners then acted on pedigree analyst Kristen Manning’s advice, that a son of Snitzel would be a good mating.

Even then, it still wasn’t Jukebox.

“We tried to get into Menari but couldn’t,” says Stumer, who thankfully fielded another friendly tip.

“I’m friends with Justine Hales, who was running Ciaron Maher’s spelling farm, and she said they’d all thought Jukebox was a Group 1 horse,” Stumer says. “So we thought, ‘he showed good ability as a two-year-old, so we may as well roll the dice there’.”

The result is a colt, raced by Stumer and friends, with a notably ‘clean’ pedigree. There’s only one repetition in Johnny Rocker’s first five generations, and even that is Jukebox’s own 4Sx4D cross of American mare Dancing Show (Nijinksy), Redoute’s Choice’s second dam and the mother of two Group 1 winners in Umatilla (Jukebox’s second damsire) and Hurricane Sky.

Stumer, though a prolific part-owner who’s had interests in several other Group 1 winners aside from Albert The Fat, including Tosen Stardom (Deep Impact), is very much a small-time breeder. He did have two broodmares until Margene sadly fell to snakebite last July while in-foal to Power (Oasis Dream).

At least her last throw is a colt set to continue her legacy, and one who’s already shown great adaptability.

Johnny Rocker was forced by Brisbane’s recent wash-outs to contest a Gold Coast synthetic trial for his barrier certificate. After he won that, trainer Barry Lockwood was forced to settle for a debut on the Sunshine Coast Polytrack. He scored a length win in a 1000-metre maiden, before stepping up to the 1300 metre and Listed class for last Saturday’s win.

“Normally, you try poly after grass and see if they handle it. Going from poly first to grass isn’t often done, but to see him handle it so well was terrific,” says Lockwood.

The veteran trainer now has another Listed Brisbane race on Saturday week in mind for Johnny Rocker, with a possible tilt at Rosehill’s Golden Rose (Gr 1, 1400m) in September on the horizon.