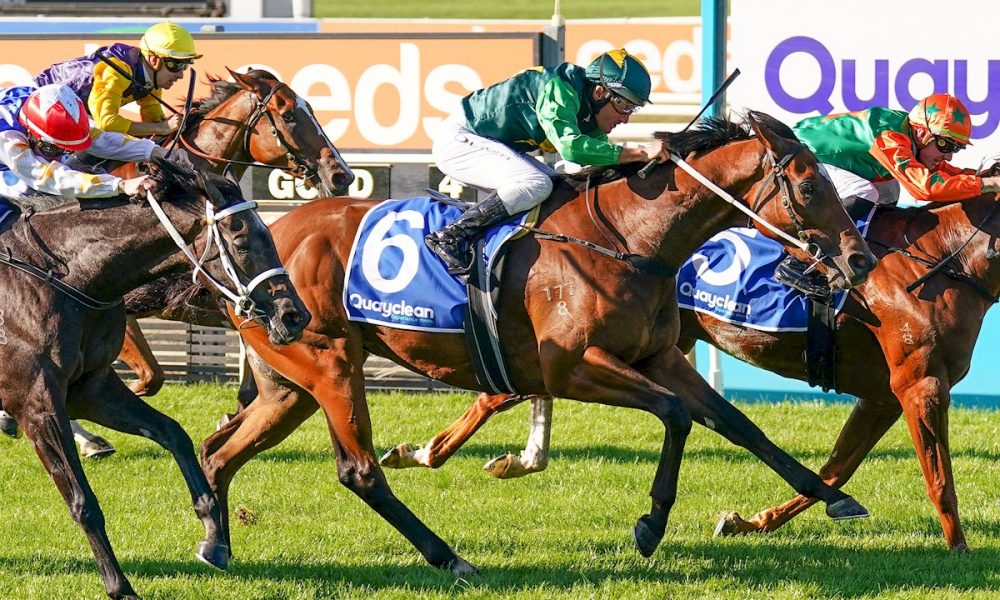 It’s well known how success in breeding hinges on family connections. And now some such linkages – of the human kind – have led over several decades to a new stakes winner, in Adelaide last weekend.

Around 1980, then-emerging breeder David Hains looked north, way north, and imported the Danish Oaks winner Love Song (Warpath), to this day one of only five entries in the Australian Stud Book with “DEN” beside its name. The bold move led to one of the most successful female families in Australian history, the Scandinavia line that produced Black Caviar among many other stars.

In 2007, Wayne Pepper, bloodstock advisor to Paul Sweeney of Bellagio Lodge in the Gold Coast hinterland, struck out on a rare path far to the east. He acquired another Oaks winner, Loving New (Choctaw Ridge). She was only the third Brazilian import to Australia among a list that now numbers just eight, and she became the taproot that led to Saturday’s Chairman’s Stakes winner Jungle Magnate (Tarzino).

The SA Derby-bound three-year-old gelding comes from the Mick Price and Michael Kent Jnr stable and has the former all over him. Price trained his sire Tarzino (Tavistock), Australia’s Champion Three-Year-Old Colt of 2015-16, who’s starting to fire with Group 3 winners Jungle Magnate and the twice Group 1-placed Gypsy Goddess from his first crop. Price also trained Jungle Magnate’s dam The Love Of Money (Casino Prince), whose two bush runs suggest she’s better on genes than ability.

You’ll find common ancestors between Love Song and Loving New but the family ties in this case involve Pepper’s sireline, from his late father Neville, who ran Kingston Farm for Hains.

“We were looking for mares for Bellagio all the time but it became harder to buy decent ones here at a good price,” Pepper tells It’s In The Blood. “But we’d bought a Chilean Group 1 winner out of the Easter broodmare sale a little earlier, for a reasonable price, so I started looking around.”

With help from Jane Henning’s Pedigree Dynamics, Pepper and Sweeney tracked down Loving New, a then six-year-old. Not only had she won the Grande Premio Diana – aka the Brazilian Oaks – she’d claimed another Group 1 in the Cidade Jardim Grande Premio Barao de Piracicaba, (the 1,000 Guineas) over 1600 metres, and was Brazil’s Champion Three-Year-Old Filly in 2004-05.

“I liked that she’d won an Oaks,” Pepper says. “Oaks mares usually make good broodmares. And I remembered how when dad was running Kingston Farm they imported Love Song, a Danish Oaks winner and placed in a Scandinavian Oaks from back in the day.

“Brazil was a relatively new field to plough. And a lot of people question the South American form. But I was of the opinion that Group 1s are pretty hard to win no matter where they are. I’m pretty sure you couldn’t just rock up in Brazil with any old thing and win a Group 1.”

And some South Americans had shone in Australia. Hussonet had come from Chile five years earlier. He’d sired multiple Group 1 winners in the Americas, had made a strong start in Australia, and was about to boom through Weekend Hussler. (He’d also sired Husson, who’d won three Group 1s in Argentina and would come to Australia to produce top-tier winner Lucky Hussler, and Host, a triple-Chilean Group 1 winner brought to Australia to produce the Latino-sounding Eduardo.)

Such success suggests South American form can translate well to Australia. And Pepper had noted “quite a few Brazilians and Argentinian horses” had performed and produced well in the US as well.

Back then, Pepper inspected only photos from Henning of Loving New, and her new filly at foot, and considered her “a good type with good bone, and the foal was a good enough type”.

After Loving New’s arrival via the US, Pepper and Sweeney would later have more good news. That first foal of hers, Questing New (Romarin) also won the Grande Premio Barao de Piracicaba, in 2009. (She’d make it three generations of performers in that race by throwing Xic New (Refuse To Bend). She only managed second in the Piracicaba but won another three-year-old fillies’ Group 1 instead, over 1800 metres).

Loving New started here by throwing Dark Matter (Stratum). Described by Pepper as “an absolute belter”. Shipped to Singapore as a $140,000 yearling, he won four times and was stakes placed there before winning the Meydan UAE 2,000 Guineas Trial, one of two wins he notched in Dubai, before a fruitful spell racing in Malaysia.

Loving New next threw Hinkler (Flying Spur), a Sunshine Coast maiden winner who was “too big”, Pepper says, before a selling-off from Sweeney led to the Brazilian mare being bought by  Patinack Farm, for $250,000, in 2010.

“We bid on her, but we knew Patinack would keep going,” says Pepper, now with Aquis Farm.

Patinack had sent Loving New to the Argentinian Husson and yielded First Crush, the dam’s only stakes winner from eight named foals in Australia, taking the Listed Grafton Cup of 2018. Loving New then threw The Love Of Money, later bought for $100,000 by Gerry Harvey upon Patinack’s spectacular collapse, which is how she ended up at Westbury Farm, New Zealand. Jungle Magnate, her first living foal, was bought by Price at Karaka for $75,000.

Pepper says he’s waiting for Loving New’s only subsequent filly All Too Rio (All Too Hard) to bob up at a broodmare sale one day. In the meantime, he was “tickled pink” to see his Brazilian’s descendant win black type last Saturday.

Loving New, meanwhile, was bought from the Patinack mess for $180,000 by Jeremy Kessell’s Wall Street Thoroughbreds. She’s now 20, resides at Riversdale Farm in the Hunter, and – after five straight misses – is now in foal to Coolmore sire Churchill (Galileo).

“She’s looking great for her age, and she’s a beautiful mare to deal with,”Riversdale’s Nick Hodges says. “If she copes well with everything she could go back in foal, but we’re aware she’s an older mare, and we’ll look after her.”

What perhaps grabs the eye most about Jungle Magnate’s pedigree is the direct female line to French blue hen, La Troienne (Teddy, 1926), one of those supremely strong paths of mitochondrial DNA which comes through eight mares. The first was La Troienne’s champion US daughter Black Helen (Black Toney, 1932), and the seventh, Loving New.

Westbury general manager Russell Warwick said one of the attractions in the mating was that Tarzino’s damsire is Zabeel (Sir Tristram). He has Teddy seven times in his ancestry, and while La Troienne is absent, she’s there three times in The Love Of Money’s pedigree: once at the bottom, and via two daughters of Buckpasser in Casino Prince’s bloodlines – Sex Appeal and Spring Adieu. Zabeel has also worked well over Casino Prince’s damsire Last Tycoon.

Attraction also lay in the six repetitions of British blue hen Selene (Chaucer, 1919) – who’s twice in Zabeel’s pedigree and once in Loving New’s – and in the triplication of Secretariat’s dam Somethingroyal.

Westbury’s former outstanding but ill-fated stallion Gold Brose was in-bred to Somethingroyal’s dam Imperatrice (Caruso). Somethingroyal appears three times in Jungle Magnate’s pedigree. Her son Sir Gaylord is in the top half in Zabeel’s sireline, and in the bottom through Casino Prince, and via Secretariat as the damsire of Loving New’s sire Choctaw Ridge – a crucial factor since Secretariat was better as a broodmare sire than a sire.

“A lot of the things we’ve done with Tarzino genetically is try to replicate what’s worked with Zabeel,” Warwick says. “So we’ve concentrated on the La Troienne, and the Selene, and those sorts that have worked well.

“And we know a bit about in-breeding to Somethingroyal/Imperatrice thanks to Gold Brose. The opportunity to do it through Tarzino has returned here.”

Warwick says Tarzino is “off to a great start” with his oldest progeny three, having accelerated in recent months to now have 15 winners from 45 runners. Jungle Magnate was his first winner – as a June two-year-old – which runs against predictions now being fulfilled by his autumn three-year-olds.

“If you’d asked what would you expect of Tarzino, you’d say he won’t get two-year-olds, would need a bit of luck to get spring three-year-olds, but from Christmas on you’d expect his three-year-olds to come out of the woodwork. And that’s what’s happening,” Warwick says.

“Now, we’re seeing every week or two there’s a good Tarzino coming out. He had a three-year-old (Tazimoto) win his maiden (at Ruakaka yesterday) over 1200 metres. The first thing you’d say is they shouldn’t be doing that. That’s very encouraging.”