Kah leads the pack in race to complete extraordinary achievement 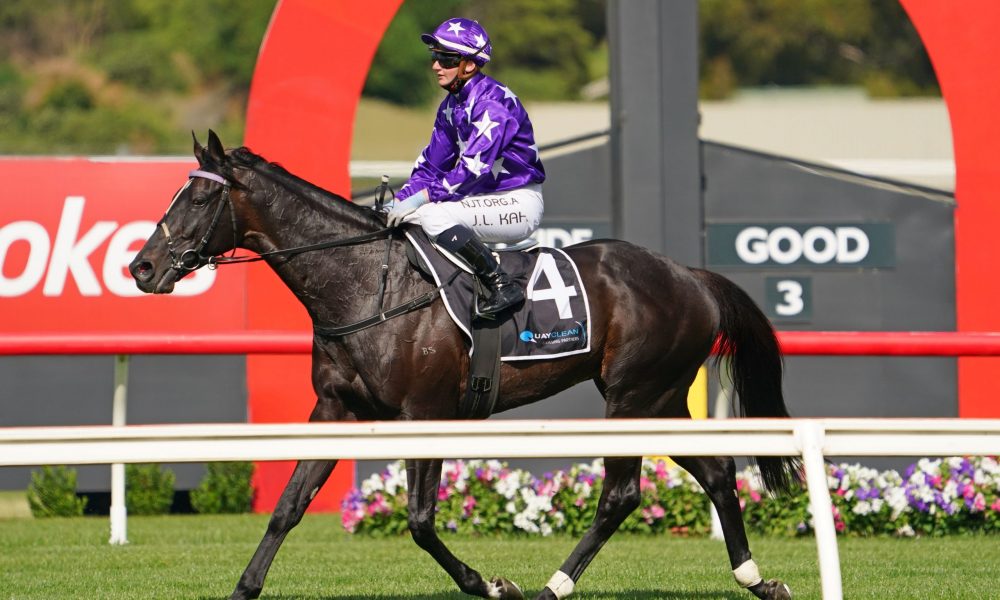 Jockey Jamie Kah’s success is likely to prove the racing story of the current season.

That will be especially so if she were to go on to claim the Victorian metropolitan jockeys’ premiership in which she currently has a seven win lead over Damien Oliver and a winning  strike rate of 20 per cent, which is about 25 per cent better than any other jockey to have had more than 100 city rides.

A Melbourne premiership win would be momentous, history making and perhaps the ultimate denouement in the story of the advance of female riders around the world and particularly in Australia.

It would surely bring an end to the archaic differentiation between male and female riders in the form guide.

The very fact that she threatens to win the title is probably enough to hail a landmark point in the evolution of this remarkable sport where men and women, young and old, compete on equal terms.

Kah rode her third Group 1 winner in mid-October; then claimed four winners on Cox Plate day and rebounded from unfounded criticism of her Melbourne Cup ride on Prince Of Arran (Shirocco) to land a treble on Sandown Classic day.

For all the undoubted talent and success of her predecessors –  who certainly trod a rockier path – and even that of some of her fine contemporaries; Kah’s day in and day out competitiveness in one of the strongest racing jurisdictions in the world has taken it all to a new level in this country.

Taken it well beyond the outstanding achievements of a trailblazing Bev Buckingham who was champion in Tasmania or the talented Clare Lindop who was a three-time premiership winner in South Australia.

Taken it beyond, in terms of the general perception of racing fans, even Michelle Payne and her historic Melbourne Cup.

And taken it a long way from 1979 when the first two Australian riding licences went to Pam O’Neil and Linda Jones and from the early to mid 1900s when some intrepid women rode disguised as men.

Her 2020 success coincides with Rachel King continuing to excel in Sydney; Jessica Eaton challenging for the South Australian metropolitan title and, perhaps, more significantly Hollie Doyle – in Britain – winning at Royal Ascot, riding five in a day at Windsor, becoming the first woman to ride a winner on Champions Day, securing a retainer and finishing fourth in the Jockeys’ Championship.

What a change there’s been to the landscape since Jones and O’Neil fought to be licensed and New Zealander Jones became the first registered female rider to win a race in Australia against male professionals – in Brisbane on 7 May 1979.

Yet another, Maree Lyndon became the first female to ride in the Melbourne Cup in 1987 and she won the Adelaide Cup that year.

Julie Krone led the way in the United States. Newsworthy enough to once feature on the cover of Sports Illustrated, she became the first and only female jockey to win a Triple Crown race when she captured the Belmont Stakes aboard Colonial Affair in 1993.

Her trail was, in part, blazed by Diane Crump who on 7 February, 1969, became the first woman to ride in a professional race in the United States.

She recalled that day in a 2012 interview. “The crowd was just swarming all over me. They were crazy, up in arms…the hecklers were yelling: ‘go back to the kitchen and cook dinner.’ That was the mentality at the time. They thought I was going to be the downfall of the whole sport, which is such a medieval thought. I was like: ‘come on people, this is the 1960s!’”

Rosie Napravnik has twice won the Kentucky Oaks this decade during which time Hayley Turner and Josephine Gordon have excelled in England.

In the past two decades, no fewer than nine women have ridden Group 1 winners in Australia with Kah, Payne, Lindop and King joined by Kathy O’Hara, Linda Meech, Nikita Beriman, Katelyn Mallyon and Lauren Stojakovic.

None (with due respect to all), however, I would argue have quite had the impact of Jamie Kah.

The 24 year-old, from the Adelaide Hills, won the first of three Adelaide Jockeys’ premiership in her first full season (2012-13) and is now poised to claim the title in the much, much tougher jurisdiction of Melbourne.

It is such a competitive environment that multiple Group 1 winning jockeys Michael Rodd and Michael Walker have struggled to secure rides at the metropolitan fixtures.

Thus, Rodd is heading back to his native Queensland. While reuniting with family was also a consideration, Rodd told Racing.com how difficult it was to regain a foothold in Melbourne. “The Melbourne jockeys’ room is so competitive from top to bottom,” he said.

Walker, a Group 1 winner as recently as October when he took the 1000 Guineas on Odeum (Written Tycoon), makes a similar observation about his competition and deserves great credit for refusing to complain about his diminishing opportunities.

“We have the most amazing jockeys here in Melbourne, whether it’s the old guys or the young kids coming through. They’re amazing,” Walker said.

And that amazing group is currently headed by Jamie Kah.