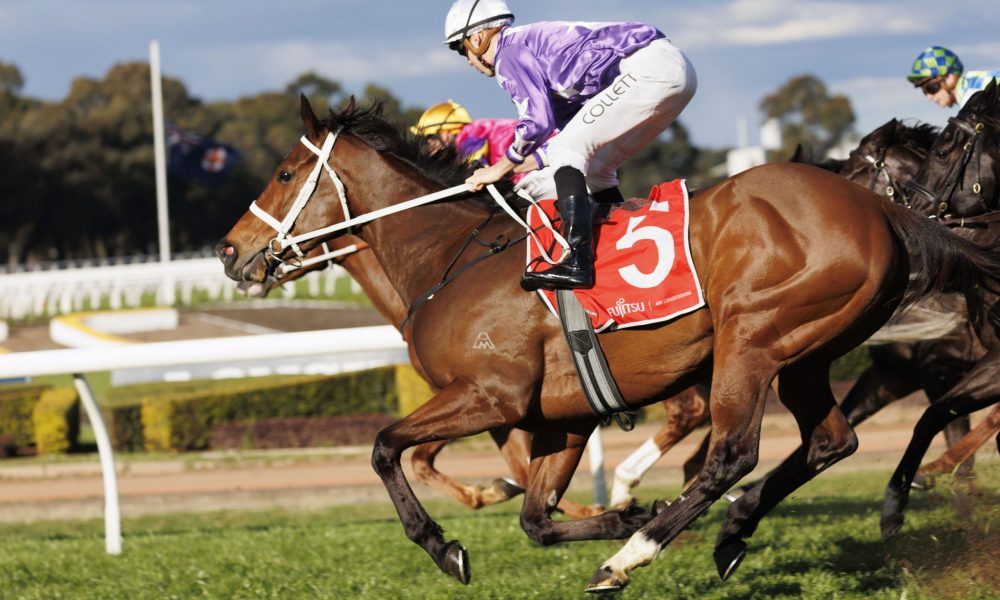 If Theo Marks Stakes (Gr 2, 1400m) winner Kiku (Zoustar) wins the Epsom (Gr 1, 1600m), her owners might want to turn their eyes skyward – not to the stars evoking those on her silks, but to the nearest pair of golden arches, and say a prayer of thanks to Ronald McDonald.

Fast food, and fast horses, lace the tale of how she came to exist, both being entwined in the remarkable story of her breeder, Frank Meduri.

If it’s true some are born lucky, for Meduri it seems the obstacles that block the pursuit of happiness for most have been parting like the proverbial Red Sea. Pretty much all his life. There have been one or two less happy moments – life is a bit of a horse race after all – but if you see him on course you might want to rub his arm before placing a bet.

It’s an immigrant story for the classics. Meduri’s dad, Domenico, then aged 18, caught a boat to Sydney from war-ravaged Italy in 1951. He found a place on Struggle Street, Redfern, and waited eight years for Caterina – whom he’d married by proxy – to come and join him.

“I once asked him, ‘What did you do on your wedding night?’” Meduri says. “He said, ‘What do you bloody think I did?’”

The family started not especially long after that. Frank grew up in a changing Australia, and in 1975 he started flipping burgers after school at a new restaurant chain that had also crossed the seas to land here four years earlier – McDonald’s – in the inner-western suburb of Hurlstone Park.

A decade later he saw a better path with the company, a lot further west. At just 24 he became a franchisee, opening two restaurants in Perth. His holdings grew to the extent that, now 63, he’s bought and sold around 25 outlets and has a son on a similar path.

Meduri returned to Sydney from Perth after a few years. Sport-mad Bob Hawke was running the country, and perhaps as a hangover from the fast and flash 1980s – as unbelievable as it sounds now – there were tax advantages to becoming involved in horse ownership, if done properly.

“There were certain kinds of syndicates you could get into that were tax deductible. It was a pretty 1980s kind of system really, but anyway, it was sort of a flavour-of-the-month kind of thing to do, I got involved with a couple of mates and ended up getting hooked,” he says.

The first horse Meduri took a share in – the very first one – was a filly by Marscay (Biscay) he owned with two other McDonald’s franchisees: Frank Tagg, already a well established owner, and Garry Moffitt. The trio named their syndicate Arch Of Gold. They called their filly Circles Of Gold.

“I thought ‘How easy is this?’” Meduri laughs. “But when she won the Oaks, I really started to become more involved. I used to have a bet but I stopped. It’s pretty hard to make money that way. I got more into the breeding side of it, and the research.”

He conducted at least some research. He read Tesio, but, with all respect to the great man, admits it “had no real influence on me”. Perhaps he’s never needed that sort of thing.

“There’s one Tesio theory that the mare’s got to fall in love with the stallion to produce a good one,” he says. “He was taking a mare to see some stallion, and she went past another stallion and got excited, so he sent her to that one. That’s how his whole dynasty started. Just a fluke!

“Mate, there’s no science to it. Breed the best to the best and hope for the best, but it doesn’t always work out.”

Circles Of Gold would unfurl her own rich breeding tale. In 1999, her three owners bred her to the best – Danehill (Danzig) – and their hope was rewarded with a handsome colt.

Trouble was, they couldn’t get rid of him.

“We actually sold him at Easter (to trainer Bede Murray for $330,000), but this was when x-rays were new, and the buyer didn’t like how his came up,” Meduri says.

It’s not as if x-ray machines were wonky then – like the infamous photo finish camera that gave Rimfire and Ray Neville the 1948 Melbourne Cup over Dark Marne and Jack Thompson – but still Meduri doesn’t rate them that highly.

“If you’d looked at Danehill’s x-rays you’d never have bought him. He was pigeon-toed like you wouldn’t believe,” he says. “You can’t x-ray what’s inside their heart. I guess you could do an ultrasound now, but it still wouldn’t tell you.”

The chosen resort was to race the colt, again with Vasil.

“Tony rang me from Caulfield one morning,” Meduri says. “He used to ride his own work, and I could hear this ‘clomp clomp’ in the background. He says, ‘You hear that, Frankie?’ I said ‘What is it?’ He said, ‘It’s a f**king Rolls Royce mate’.”

It was, of course, Elvstroem, and the rest is glorious history: five Group 1s, including the first by an Australian in Dubai and his stirring victory over great rival Makybe Diva (Desert Sun) in the 2004 Caulfield Cup, earnings of $5 million plus, and then a stud deal at a very appropriate price.

“Winning that Caulfield Cup was probably my biggest thrill in racing,” Meduri says. “It’s the best 2400-metre handicap in the world.

“He was an amazing horse. We travelled the world with him. He met Makybe Diva six times and beat her four times. He doesn’t get the credit he deserves. He should’ve got Horse of the Year in 2004 over her.”

Three years after that mating, Circles Of Gold was sent to third season American shuttler Fusaichi Pegasus (Mr. Prospector). This time she had Haradasun. Now she was taking the Mickey.

“The second time Tony Vasil rang me, he said, ‘You hear that?’ I said, ‘I can’t hear a thing’. He said ‘That’s ‘cus this one moves like a hovercraft’.”

Along came two more of these nearly run-of-the-mill Group 1s – plus one extraordinary one in Royal Ascot’s Queen Anne Stakes (Gr 1, 1m) – before Coolmore paid a southern hemisphere stud record of just more than $22 million for a half share in 2007.

The same year, Meduri bought an Irish import by Sadler’s Wells (Northern Dancer) named Park Heiress for $38,000, in foal to Not A Single Doubt (Redoute’s Choice), and even that turned to precious metal. The resultant colt went to South Africa, racing as Castlethorpe, and won a Grade 3 and was second in a Grade 1.

Sent to Haradasun by Meduri, Park Heiress bore him a filly he named Atotori (Japanese for ‘heiress’). She didn’t have the legs for racing, but Meduri sent her to Zoustar (Northern Meteor) and out came Zoutori, a $160,000 Easter purchase who’s won a Newmarket Handicap (Gr 1, 1200m) among four stakes wins up the Flemington straight.

After a try with Choisir (Danehill Dancer) didn’t work, a return to Zoustar has yielded Kiku. With a 5Sx4D doubling of super mare Fairy Bridge (Bold Reason) via Fairy King and Sadler’s Well, Kiku was a $300,000 Gold Coast Magic Millions purchase by Star Thoroughbreds who’s now won a Group 3 and the Group 2 Theo Marks, and is at $21 for the Epsom on October 1.

Atotori is no longer among Meduri’s half dozen mares, having died in the same horror truck crash that took three Shadwell Park mares in 2020. That was some bad luck for her blessed breeder, but he can’t complain.

“Racing is a lottery. You buy your ticket, and I got lucky,” says Meduri, who “fluked” the NSW Breeder of the Year award last year for Zoutori and Kiku.

“I think I’ve been lucky because I’ve tried to be a good bloke. I do believe in karma, and that what goes around comes around.

“I’m not really religious, but my wife Marie is. She’s got a statue of the Virgin Mary at home. And right next to that, I’ve got a statue of Ronald McDonald. I kiss his feet every day.”