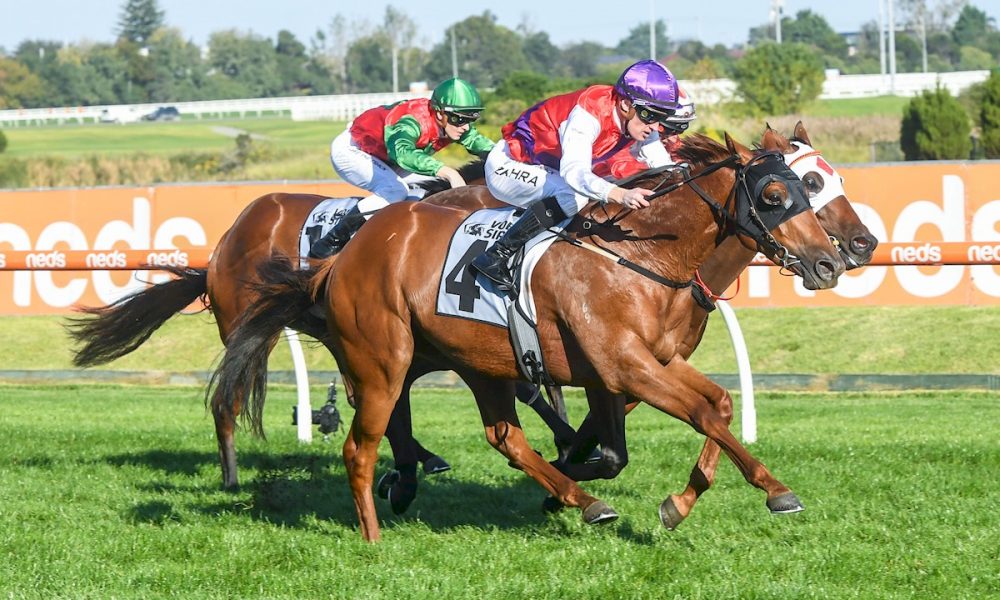 You can say this much about the broodmare Peckish (Snitzel): she may be no oil painting and was excruciatingly slow, and she does have a shocking personality.

Well, yes, but we can all wax sentimental about our horses now and again, especially the mares.

Now, before you think we’ll pull that old gag about these just being her good points, they’re not. This 11-year-old chestnut – reckoned by some to be one of the more modestly-bred and even more modestly-performed Snitzels (Redoute’s Choice) in history – has only gone and thrown the winner of last weekend’s big million-dollar race at Caulfield, hasn’t she?

Beneath a few other caps some head-scratching may have been going on, in contemplation of the wonders of breeding, and the glorious uncertainties of the turf.

Peckish, from the great Snitzel’s fourth crop, was out of Kvante (Filante), who had some toe, winning twice for trainer Gary Portelli, including one in town. But she didn’t do much at stud, throwing four named foals, two of whom raced, neither of whom shone.

One was Peckish. Starting out in 2014 with trainer Tim Martin, she had four starts. She debuted with a sixth of ten, beaten nine lengths, in a Canberra maiden, and it was all downhill from there, until an injury-enforced retirement following another distant sixth, at Cowra. She earned $925 – all of it in bonuses.

She went to the breeding barn and there was little more to write home about. She threw She’sinthelimelite (Kuroshio), who, passed in at half of a $30,000 reserve as a yearling, managed one Kembla Grange placing from ten starts.

Peckish was then bought, for just $1,000, by Victorian breeders Sarah Beaumont and partner Joel Walton of Leneva Park, who sent her to another Victoria-based stallion in Oamaru Force (Geiger Counter). This brought an upturn in her fortunes, if short-lived, with Indiana Rose winning at Albury before being retired after her second start with tendon issues.

Next came Reward For Effort (Exceed And Excel), a cover that produced Siasha Jewel, a now three-year-old filly who’s had an eighth and a fifth in the bush so far for Albury’s Donna Scott.

But against what has been a fairly dull backdrop came a bright burst of sunshine. In 2018, Beaumont and Walton sent Peckish to Ilovethiscity, the stallion who won a Group 1 in the 2011 Randwick Guineas (1600m), was placed in two others, and won two other stakes races before an injury-enforced retirement after 17 runs.

He had a filly on the track who’d go on to win once from 19 starts. But she was called El Dorado Dreaming, and that win was the Group 1 Sires’ Produce Stakes (1400m) at Randwick. Still, when visited by Peckish only a few months after that, Ilovethiscity’s service fee had dropped to just $4,400, in his penultimate season of eight at Larneuk Stud before his switch to Noor Elaine.

All things considered, Ilovethiscity can be said to have kicked a major goal in that mating with Peckish. The resultant chestnut colt made it into the Adelaide Magic Millions Yearling Sale, and was bought for $32,000 by no less esteemed judges than Anthony and Sam Freedman. He came to hand quickly to open his account with a third at Bendigo and a fourth at Ballarat last spring, resumed with a third, also at Ballarat, earlier this month, before that ultra-impressive win in The Showdown broke his maiden and took his earnings to a considerable return-on-investment, at $580,000.

There was some symmetry there. King’s Consort’s fifth sire is none other than the Great British-bred stallion after whom that VOBIS feature is named – Showdown (Infatuation) – one of the finest stallions to stand in Victoria and Australia’s champion sire in 1977-78, who comes in through The Judge-Zeditave-Magic Albert-Ilovethiscity.

And there’s a bit of a thread, albeit plucked from a long bow, to be found via King’s Consort’s maternal side. His sixth dam, La Broche (Chris), produced Silver Shadow in 1972, who won the Black Opal Stakes (Gr 3, 1200m) and the Warwick Stakes (Gr 2, 1400m). Ilovethiscity came second in the Warwick Stakes in 2011 when it was a Group 2 – and held one race before the Group 3 Silver Shadow Stakes.

If it feels like we’re clutching at straws a little, it’s because King’s Consort’s catalogue page is almost entirely bereft of black type on the female side. All there is comes at the very bottom, with his fourth dam Genuine (Lunchtime) having thrown Never Too Close (Marscay), who one golden day came second in a Listed race in Brisbane.

Perhaps Peckish is finally proving her worth, even if it may seem that’s only through mating with Ilovethiscity. She was sold on last year (for a solid profit at $15,000) with her Puissance De Lune (Shamardal) filly, who last week was passed in at $20,000 at the Inglis Gold Yearling Sale.

Still, throwing King’s Consort alone could be a very worthy contribution to the breed by Peckish, and not bad a mare of her repute.

“She’s got a pretty ordinary page, and physically she’s a very ordinary type: barely 15 hands, pretty fat and round with no real shape to her,” says Leneva general manager Mick Sharkie, adding her personality also often saw her playing hard-to-like.

“Everyone was acutely aware of where she was in the paddock, because she’d line you up and run across the paddock, flat-stick, and wouldn’t stop. If you stood still she’d have gone through you at pace. She came close to getting a few people,” Sharkie says with a laugh.

Still, there’s potential magic to be found in most pedigrees. And Tesio and Rasmussen themselves may have been tickled by the repetition of a couple of strong females, through complementary lines, in King’s Consort’s bloodlines: the great French dam La Troienne (Teddy, 1926) and the British-bred Plucky Leige (Spearmint, 1912).

There’s a repetition of Bimelech (Black Toney), La Troienne’s most successful son, and it comes through the mare Heart Of Market (To Market, 1967), doubled up in a 5Sx5D cross through two sons. She’s the dam of Kenfair (Kenmare, 1989), Ilovethiscity’s damsire, and of Peckish’s maternal great-grandsire, Marscay (Biscay).

And the fact Peckish is by Snitzel fuses another line of La Troienne through her daughter Businesslike (Blue Larkspur), via Danehill’s (Danzig) granddam Spring Adieu (Buckpasser).

Deep in King’s Consort’s pedigree, from eight generations back and further, there’s a strong and complementary blend of the four key sons of Plucky Liege. As previously noted in this column, three sons are believed to have inherited the same one of that mare’s two X chromosomes – Bois Roussel (Vatout, 1935), Sir Gallahad (Teddy, 1920) and Admiral Drake (Craig An Eran, 1931) – while Bull Dog (Teddy, 1927) is thought to have inherited the other.

Bull Dog is a heavy presence, three times in the pedigrees of both Ilovethiscity and Peckish.

Ilovethiscity has Admiral Drake three times and Sir Gallahad once, while Peckish accounts for a significant presence of Bois Roussel, through a 6Sx4Sx5D triplication of his influential descendant, Lunchtime (Silly Season).

Whatever makes it work, Noor Elaine was thrilled with its sole stallion’s reward last Saturday, with stud manager Tim Jackson saying Ilovethiscity has performed well from limited opportunities. The 14-year-old has left an average of only 33 live foals for each of his ten seasons at stud. His first year at Noor Elaine in 2020, when standing for just $4400, brought 124 mares. He covered 51 last season after the fee was doubled, but a larger book can be expected this year thanks to a drop to $6600, and the exploits of King’s Consort.

Not only that, Ilovethiscity had another starter in the race in Capital Express, who ran seventh following her debut win at Cranbourne. And Annabel Neasham’s Diamond City won her third start, at Wyong, this month, giving Ilovethiscity three winners from five starters in his current two-year-old crop.

Overall, he’s had 66 winners from 109 runners at 60 per cent, with five stakes winners, at 4.6 per cent. Aside from El Dorado Dreaming, first-cropper Chapel City won an Adelaide Group 3, while Listed victories have also come for Ilovemyself, Moonlover and another Team Freedman-trained performer in King Of Hastings, who’s come second in a Group 3, won more than $600,000, and like King’s Consort has a Danehill-line damsire.

Jackson hopes The Showdown result brings a boost this spring for Ilovethiscity and Noor Elaine, which also bred and part-owns Hollerlujah (Holler), who ran eighth in the race after taking Bendigo’s VOBIS Gold Rush (1000m) at her debut.

“For the opportunities he’s had, Ilovethiscity is doing extremely well,” Jackson says. “He gets one or two two-year-olds a year, and he’s got a few good older horses like King Of Hastings.

“It’s not an easy gig trying to make stallions. They’ve got to have the numbers and have the progeny there in the limelight all the time. But for what you pay and what you get from Ilovethiscity, he’s a very good value stallion.”