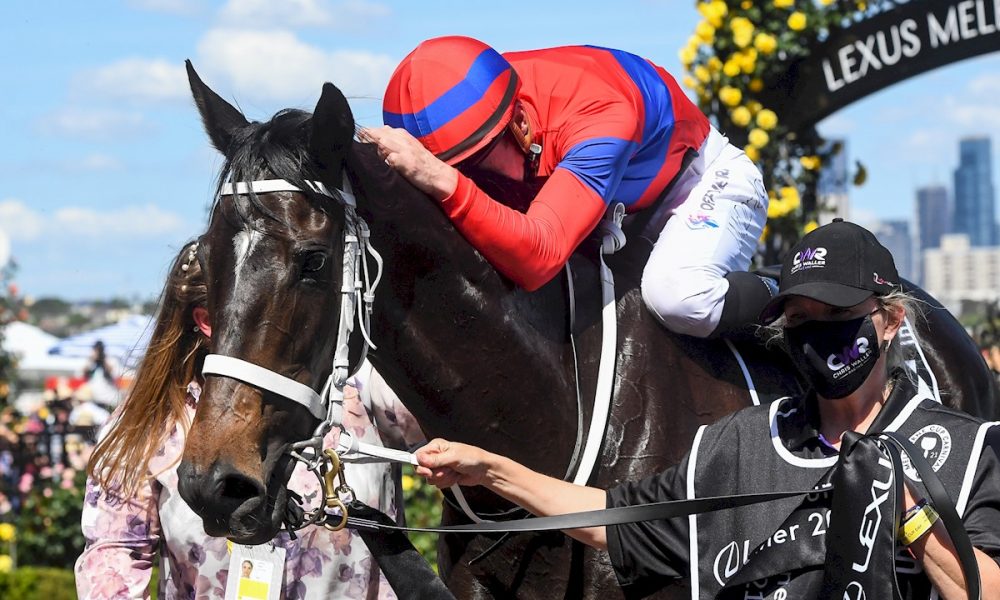 Prior to last Tuesday and the stunning Melbourne Cup (Gr 1, 3200m) victory by Verry Elleegant (Zed), the above trifecta of words was reserved for the original Kiwi (Blarney Kiss), the 1983 winner.

The similarities are noteworthy.

Both are from very humble New Zealand backgrounds. Kiwi was bought by farmer Snowy Lupton for the princely sum of $1,000.

Verry Elleegant’s dam was purchased for $14,000 then sent to Zed (Zabeel), whose service fee was $5,000 (although breeder Don Goodwin is a shareholder).

Kiwi spent most of his life at Lakeside, Lupton’s property just a minute east of the small South Taranaki town of Waverley. He was the epitome of a working horse. No cushy stable life for him. When he wasn’t winning races he was regularly employed rounding up sheep.

Verry Elleegant was foaled a mere 12 kilometres further south east of Waverley near an even smaller village named Waitotara, at Grangewilliam Stud. The stud was originally established by Capt. Tim Rogers and is now owned and operated by the Corcoran family, principally Mark and his wife Jane, who took over from Mark’s parents John and Anne.

The mare herself is so honest. She gives her best no matter what, yet in some ways, she is perhaps fortunate to have reached the incredible heights she has.

Not too long after her fabulous win we learned that when Verry Elleegant first showed up at Nick Bishara’s stable she was quite a handful. So much so, she had to go back to the breakers and go through that process all over again.

Imagine if her ways were not overcome?

James McDonald describes the mare as “awkward” which may be code for “has a mind of her own” and it would be interesting to have him expand on that.

That same term could easily have been applied to her great grandsire, Sir Tristram (Sir Ivor), and perhaps he is one reason for the mare’s “personality”.

Certainly, in the human world, extraordinary talent is often associated with individuals who have a mind of their own. Why not in the equine world?

Happily for we racegoers, when the mare is on the racetrack, look out. She has stacks of ability and talent, not to mention heart.

On Cup day there was a gathering at Grangewilliam as the Waverley Racing Club is establishing a fund, raising money that will be used for a bronze statue of Kiwi, slated for a prominent place in the township. If there is any cash left over, they might keep the fund open and add a statue of Verry Elleegant for Waitotara.

For the first classic of the current New Zealand season, a new star emerged at Riccarton on Saturday.

Last upon straightening, Opie Bosson tugged hard on the right rein and the colt angled out for clear running. Four lengths from the lead at the 200-metre mark he was flying. He was then levelled up at the 100 metres before booting clear. At the line he was coasting, two and three quarters in front in a devastating effort.

Noverre displayed good acceleration in winning the War Decree Stakes (Gr 3, 1600m) at Ashburton, two weeks prior, but this performance was at a different level and against a talented group of three-year-olds.

Second-placed Meritable (Snitzel) has been consistent in the lead-ups, including a close second in the James & Annie Sarten Memorial (Gr 2, 1400m) on Labour Day. While Field Of Gold (Starspangledbanner) in third was a very good second to Noverre in the War Decree Stakes and is highly regarded by top trainer Tony Pike.

The above underlining the strength of the opposition so ably dismantled by Noverre.

January’s Karaka Million 3YO Classic (RL, 1600m) is the next target but even bigger prizes and prestige could be on the horizon.

“What we do after the Karaka Million 3YO Classic, who knows?” said trainer Jamie Richards.

“We have brought a few colts over and gone home with our tail between our legs, so hopefully this colt will be one we get over there and can be competitive with.”

For Savabeel (Zabeel), Noverre becomes his 25th Group 1 winner and the boost in sire earnings shot the stallion $460,000 in front in the standings on the NZ sire premiership, setting him up for an eighth consecutive title.

One of the more expensive purchases by the Te Akau operation, Noverre was sold out of Waikato Stud’s Book 1 draft at the 2020 NZB Karaka Yearling Sale for $800,000.

His breeder, Garry Chittick, bought back into the colt, whose dam and granddam were both two-year-old stakes winners.

Graeme Rogerson sold his dam, Magic Dancer (Rip Van Winkle), to Chittick when she retired and to date the mare has produced four colts in succession, all by Savabeel, Noverre being her first as well as her first to the races.

Noverre’s granddam, seven-times winner Dazzling Belle (Desert Sun) was a brave fourth against the boys in the 1999 version of the NZ 2,000 Guineas.

She, herself, visited Savabeel to produce Suriyan in 2006, the granddam of Kinane (Reliable Man), winner of the Frank Packer Plate (Gr 3, 2000m).

Noverre descends from Fond Embrace (Resurgent), a three-quarter sister to Listed winner Ruakiwi Lass (Resurgent) who won 13 times. This is the family made famous by the Tapp family in conjunction with Te Rapa Stud near Hamilton.

Not content with two Group 3s and a Group 2 within ten days here in New Zealand, Trelawney Stud added a Flemington Group 2 win when their homebred mare Zayydani (Savabeel) captured the Matriarch Stakes (Gr 2, 2000m) on the final day of the Melbourne Cup Carnival.

Capping a sensational few weeks, their beautifully-bred Zayydani (Savabeel) added to her Listed win at Eagle Farm in June with a super win at Flemington, enhancing her already great value.

Back near the rear upon straightening, Zayydani kept to the inner, drove through to form a line of five at the 200 metres, then narrowly took over at the 100 metres and was tenacious to the line.

From 17 starts Zayydani has now won five and with Saturday’s Group 2 win she takes her bank account to $429,000.

All three winning mares will eventually be welcome additions to Trelawney’s breeding paddocks. Two Illicit and Zayydani are five-year-olds and this season might be their last hurrah but with the current season only just into its fourth month, there is nothing to suggest that all three can’t add to their already valuable black-type records.

The bloodlines of Zayydani and Cheaperthandivorce have much in common. Both mares are bred on the same Savabeel-Van Nistelrooy (Storm Cat) cross.

Storm Cat (Storm Bird) is also the sire of Tale Of The Cat, damsire of Two Illicit.

Within the space of mere weeks, Waikato Stud’s first family is in the news for a fifth time.

Espiona created a huge impression when bolting away by six lengths in the Desirable Stakes (Listed, 1400m) on Oaks day at Flemington.

Her rider, James McDonald, stated: “I feel embarrassed taking my riding fee for that one,” so impressed was he after the race. “She is a very, very smart filly and it will take a crowbar to get me off her. Her acceleration is something to behold. She gives you the feeling of a proper horse and it probably looked as good as it felt.”

Espiona was having only her second start. Her first, on debut, she won by three and a half lengths at Warwick Farm two weeks prior.

The four-day Melbourne Cup Carnival wrapped up on Saturday and Kiwi-breds more than held their own.

The highlight, of course, was Verry Elleegant (Zed) and her magnificent Melbourne Cup (Gr 1, 3200m) victory.

Day one, from a Kiwi perspective, belonged to Justacanta (Per Incanto) who has grown another leg since arriving in Victoria, landing his biggest win yet in the Linlithgow Stakes (Gr 2, 1200m).

For Excelman it was his fourth career win and second in Melbourne, having scored at Caulfield back in May. An attractive grey, Excelman was sold by Westbury Stud at the 2018 Magic Millions Yearling Sale for $400,000.

Spirit of Gaylard, although conceived in Australia, was sold at the 2020 NZB Karaka Yearling Sales (Book 2) out of the Berkley Stud draft.

It was the fourth win in seven starts for the Mike Moroney $280,000 purchase and his earnings now exceed $370,000. Moroney selected him out of Inglewood Stud’s Book 1 draft at the 2018 NZB Karaka Yearling Sale.

Day four’s highlight was Zayydani (Savabeel) for Trelawney Stud (see above) and the second Kiwi victor was Age Of Chivalry (He’s Remarkable).

Qualifying as the best performer by his sire, He’s Remarkable (Pentire), Age Of Chivalry got under the guard of practically every buyer and was snapped up for just $4,000 from the Mapperley Stud draft at the 2018 NZB Karaka Festival Yearling Sale.

The return to the winner’s enclosure for the six-year-old was clearly overdue, having twice finished second at Group 1 level two years ago and running some honest races in the meantime.

Fresh up from a strong Group 3 win in the Cambridge Breeders’ Stakes (1200m) last May, Babylon Berlin (All Too Hard) was much too speedy in taking out her fifth career win in the Pegasus Stakes (Listed, 1000m).

Carving out the last 600 metres in 32.40 seconds, Babylon Berlin gave her opponents little hope of catching her, leading for most of the journey and logging a smart 56.53 seconds for the 1000-metre dash.

The Legacy Lodge Sprint (Listed, 1200m) at Te Rapa on Saturday resulted in a surprise victory for Raposa Rapida (Foxwedge).

His performance, however, was a very good one as he was trapped three-deep the entire race.

He looked in for a comfortable victory when striding to the lead at the 100 metres but had to dig deep to hold on by a head.