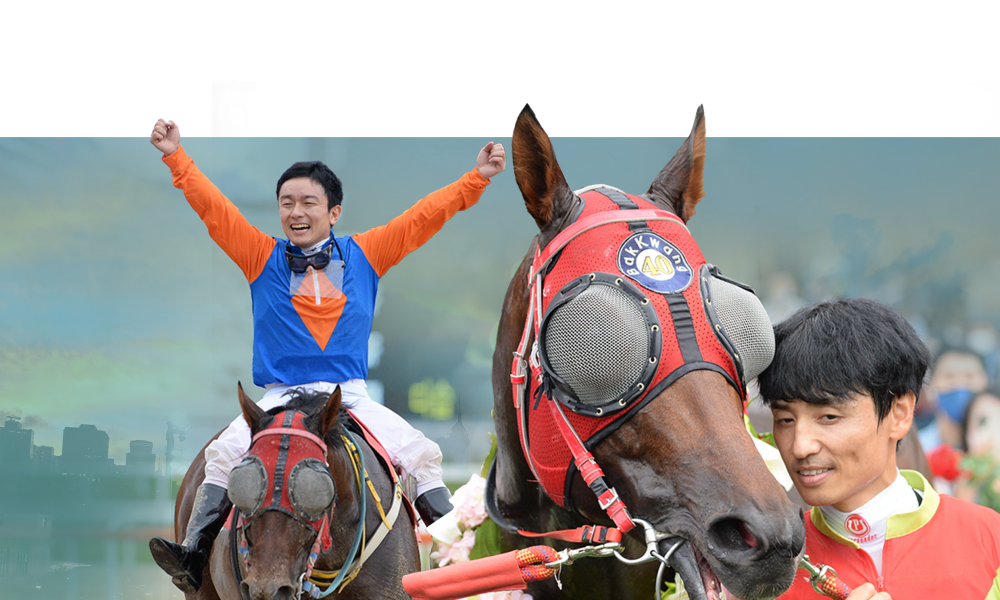 The Korean breeding industry is considered to be one of the rising stars of the global game and a red letter day in Seoul on Sunday did little to dampen that notion as they took on challengers from all corners of the world and came out on top.

The Korea Cup (Gr 3, 1800m) and the Korea Sprint (Gr 3, 1200m) were established in 2016 to entice foreign-trained horses to Seoul to tackle the best local horses on the sandy, beach-like track at LetsRun Park in the South Korean capital.

Targeted with success by horses from Japan and Hong Kong as well as by leading trainers from the United States and Europe, both races returned last Sunday after a two-year hiatus due to the Covid-19 pandemic.

While challengers from Japan, Hong Kong, the UK and Singapore were favoured to take both prizes, it was the home team that proved victorious in both features.

The Choi Ki Hong-trained Winner’s Man floated along the Seoul sand under Seo Seung Un, coming with a late flourish to defeat Raon The Fighter by a length with a further length back to favourite Sekifu in third. They came nine lengths clear of fourth-placed King Of The Match (Cairo Prince).

The Korea Sprint, also worth 1 billion won, was won by American-bred local Eoma Eoma (Algorithms), with the Song Moon Gil trainee charging home under Moon Se Young to defeat Japan’s Raptus (Deep Brillante) by a half-length to the roar of the Seoul crowd.

“Previous winners on this card Blue Chipper and Moonhak Chief – and indeed, Eoma Eoma – they are all American-breds though trained in Korea,” Korea Racing Authority (KRA) broadcaster and international representative Alastair Middleton told Asia Bloodstock News. “The Korea Cup was a significant result and it is good to show they can be competitive.

“The breeding industry took a large hit during Covid but overall the signs are positive. There are some exciting stallions here and they are standing privately rather than being owned by the KRA. Musket Man and Bayern are two examples and another blue chip arrival recently is Air Force Blue at Pegasus Farm, the highest rated horse ever to be imported for stallion duties. He is having his first covering season this year and he has covered 63 mares.

“There was a very good atmosphere in the racecourse on Sunday and the emotion from the jockeys at the end of the races fed into that. From my booth I could hear the broadcast technicians outside screaming when Eoma Eoma went past Raptus – up until then I didn’t know they actually watched the races!”

At the initial Korea Cup meeting in 2016, the KRA’s then-executive director of racing Yang-tae Park said that the aim was to achieve Group 3 status by 2019 and Group 2 status by 2022 with the hope that both could become Korea’s first international Group 1 races within a decade.

While the first goal was achieved, the Group 2 aim has been pushed back to 2024 with both races on target to meet Asian Pattern Committee benchmarks for promotion.

That very much depends on continuing international support, which not only provides a baseline for measuring form but also gives greater exposure for the industry at home and abroad. For instance, Middleton identifies the Australian-bred Computer Patch (Exceed And Excel), trained in Hong Kong by Jimmy Ting, as one horse who particularly drew attention during the week.

“International support is very important and it has been ever since the first time an overseas horse visited here, which was in 2013,” he said. “While this year’s race didn’t have horses from as many countries as some previous editions, it was great to have the ones that we did. Everything from how they work in the mornings to how they are turned out gives us something different. I think Computer Patch especially had that ‘wow’ factor when he stepped off the trailer and into the parade ring.8

“I think the form stacked up very well and we got a good gauge of our form against the world. I felt the Hong Kong horses were desperately unlucky with their races done in the very early stages. Celavi was an example of how hard it can be for true five-furlong to six-furlong sprinters to stay the 1200 metres on the sand. With a kinder draw, Annaf may have got a little closer as I felt he ran well while I think Intellogent just didn’t enjoy the surface.

“We know the Japanese will always have no trouble with the surface as especially those with NAR experience will have at least trained on the same stuff. Both Sekifu and Raptus ran huge races. I would love to see Sekifu come back next year as a four-year-old and with perhaps a less busy season behind him. Raptus, too, ran to form and would have been a worthy winner. All the top Korean runners were there and really, they all ran to form, reflected in their odds.”

The next global test for Korean horses is set to come in Dubai, four years after Dolkong (Afleet Alex) – who finished 11th in the Korea Cup on Sunday at his first run since 2019 – became the country’s first runner in the Dubai World Cup (Gr 1, 2000m).

“It is on the agenda, but it takes the right horse and ultimately the decision is with the owners and trainers,” Middleton said, citing local races like the Grand Prix Stakes (2300m) in December among the prestigious targets prized by Korean owners.